Mitt Romney is now campaigning for Ted Cruz, but can't find anything good to say about him 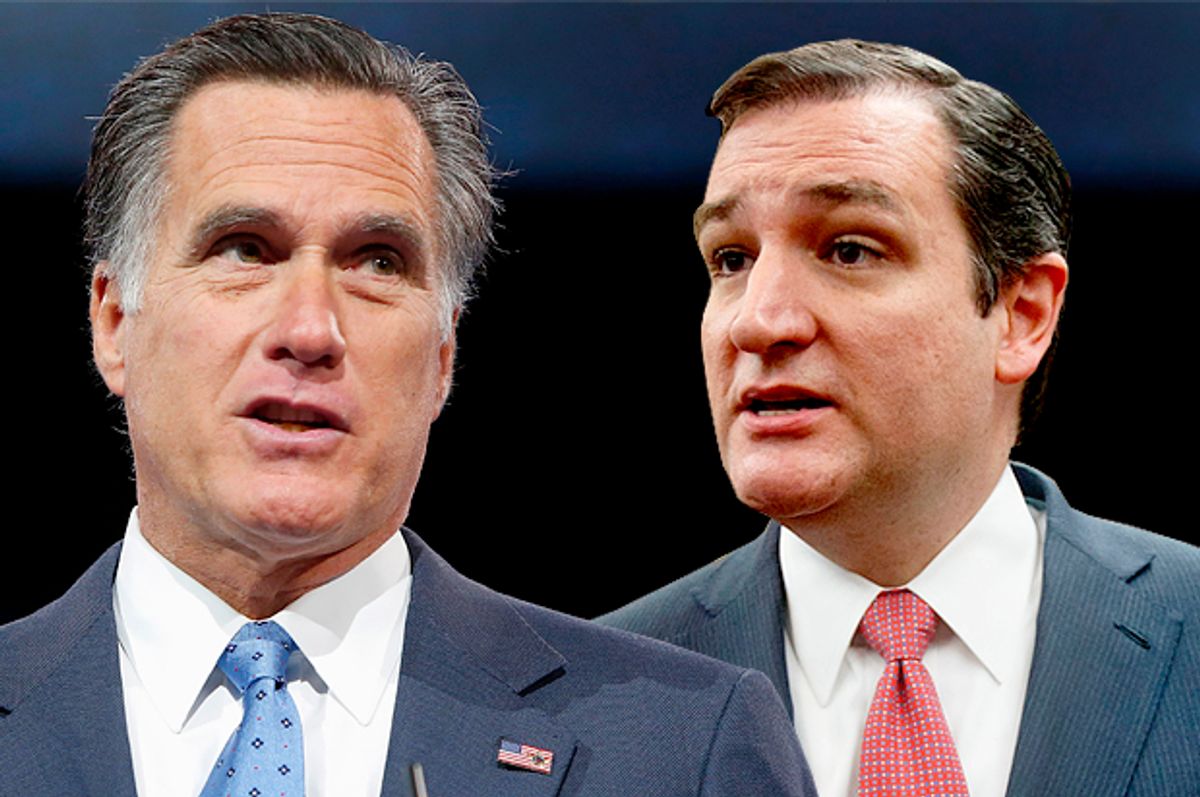 It was only just a week ago that Willard Mitt “Mitt” Romney was a fan of Ohio Gov. John Kasich. The 2012 Republican presidential nominee campaigned with Kasich and encouraged Republican voters in Ohio to vote for their governor for president. “Unlike the other people running, he has a real track record,” Romney said of Kasich ahead of the Ohio primary. “He has the kind of record that you want in Washington, and that’s why I’m convinced that you’re going to do the right thing tomorrow.” The “right thing,” of course, was to support Kasich over Donald Trump, whom Romney has made the target of a last-minute, poorly considered strategic voting scheme intended to deny Trump the 2016 Republican presidential nomination. Trump won just about everywhere last Tuesday, but, as Romney hoped, he lost Ohio and its 66 delegates to Kasich.

Things have changed since then. Fulsome praise of his “real track record” notwithstanding, Romney never actually believed Kasich would be elected president. To Romney, Kasich was a strategic asset who ceased to have value post-Ohio. He just wanted him to win where he could and then drop out, because that’s how Romney’s anti-Trump plan would work best. So now Romney is jumping over to Ted Cruz’s team, sensing rightly that Cruz is the better bet for taking on Trump in the long term. But, in typical Romney fashion, the transition is awkward and politically self-defeating.

In a statement posted to Facebook, Romney announced that he’ll be voting for Ted Cruz today in Utah, and he didn’t even try to pretend that it’s for any reason other than screwing over Trump:

The only path that remains to nominate a Republican rather than Mr. Trump is to have an open convention. At this stage, the only way we can reach an open convention is for Senator Cruz to be successful in as many of the remaining nominating elections as possible.

I like Governor John Kasich. I have campaigned with him. He has a solid record as governor. I would have voted for him in Ohio. But a vote for Governor Kasich in future contests makes it extremely likely that Trumpism would prevail.

Romney also cut a robocall on behalf of Cruz, telling Utah voters: “This is the time for Republicans across the spectrum to unite behind Ted. He is the only Republican candidate who can defeat Donald Trump, and at this point, a vote for John Kasich is a vote for Donald Trump.”

So Mitt Romney is now in the situation where he’s campaigning for Cruz, but he's still praising Kasich even as he warns people against voting for him. At the same time, Romney won’t actually endorse Cruz. In fact, he can’t bring himself to utter a single positive word on behalf of the candidate he’s telling people to vote for. It's an anti-endorsement, and it's painfully clear that Romney wouldn't be doing this if he felt he had any other choice.

Nobody looks good here. Romney is transparently trying to game the system and telling people different things at different points, trusting that they’ll understand that he’s playing some variety of multidimensional chess. In Ohio he says Kasich would be a great president, but in Utah he says a vote for Kasich is worse than wasted. On Facebook he says he’s backing Cruz so Republicans can have an open convention, but in pro-Cruz robocalls he says Cruz “is the only Republican candidate who can defeat Donald Trump.” And we already know that Romney doesn’t actually think Cruz is a strong presidential candidate. In 2014, Romney said the Republican nominee would have to be someone who “represents as broad a portion of the party as possible,” and he made clear that neither Cruz nor Rand Paul fits that description.

As for Cruz, he’s no fan of Romney either. He’s trashed Romney in private remarks to donors, and he says in public that candidates like Mitt are the reason Republicans keep losing presidential elections. But now Cruz has to sit there and take it while Romney “endorses” him by making clear that he considers Cruz the less-terrible of two terrible options. If Romney looks like he’s playing a game, then Cruz looks like one of Romney’s pawns. It’s embarrassing for Cruz, who wanted to take control of the Republican Party by standing on principle and leading a conservative uprising against an establishment that would try to elevate someone like Romney to the presidency. Now he has to lean on Mitt Romney, of all people, to stop Donald Trump.