Why hashtags like #PrayforBrussels trend: It says "I won’t allow myself to be dehumanized by the silence"

Salon talks to a liberal pastor about ethics, praying for enemies, and why vengeful politicians are so dangerous 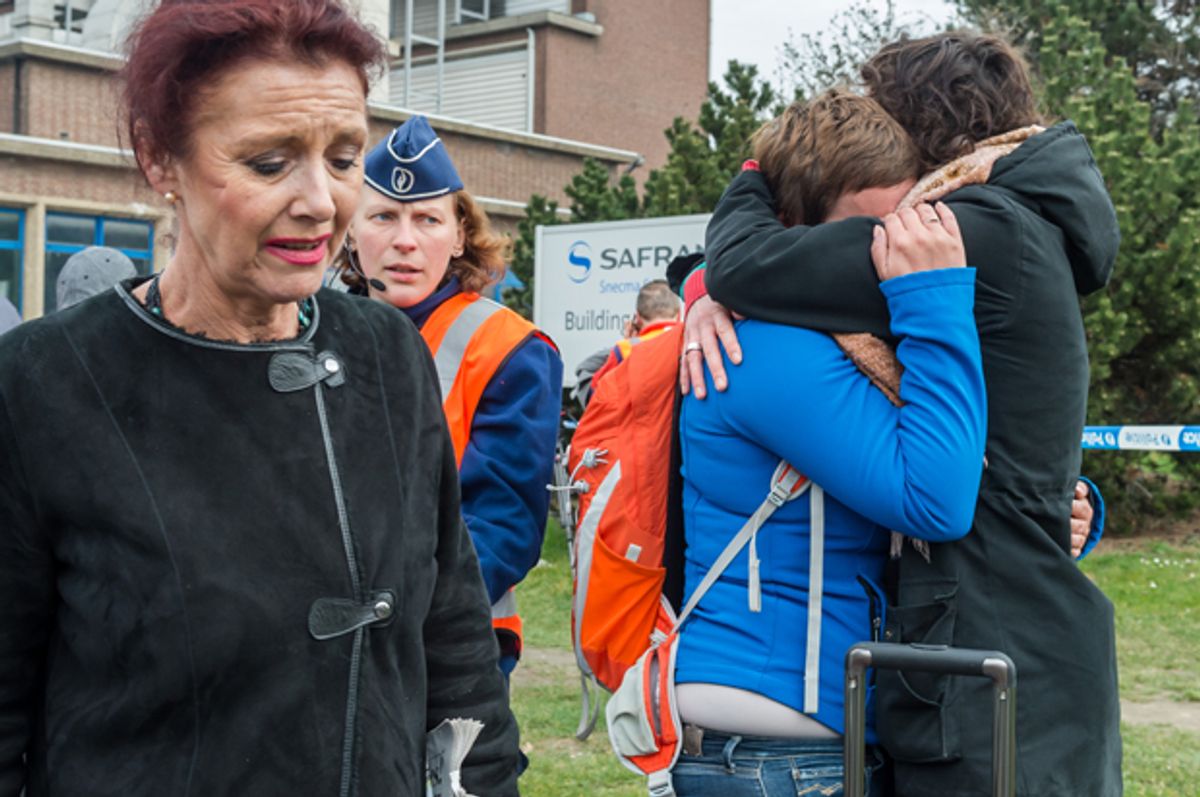 The terrorist attacks in Brussels have devastated people in Belgium and left many others – secular and religious alike -- struggling to make sense of what happened. Even if we expect evil in the world, these events are shocking and disorienting, and the grief mixed with angry shouting makes them difficult to interpret.

What is the personally effective and ethically responsible way to respond? How do we reconcile this kind of violence in our individual lives, in our community, and in social media? Is praying just an evasion, a useless symbol?

We spoke to Daniel Schultz, who leads St. Paul’s United Church of Christ in Malone, Wisconsin. Schultz -- who is active on Twitter, where he goes by the handle @PastorDan -- also writes for the site Religion Dispatches. The conversation has been lightly edited for clarity.

How does a pastor like you see what took place in Brussels? Is it evil? It’s clearly a tragedy. How do you make sense of it?

At least from my perspective, it’s less a religious phenomenon than a political phenomenon. Joshua Hersh had a Twitter thread this morning about how these guys are actually not very religious.

Oh, I don’t mean that they’re religious. I mean how do you, as someone who believes in a benevolent God, look at this? How do you reconcile that with this kind of tragedy. Is it difficult?

My personal belief, and what I teach my people, is that things happen. Evil things happen in the world – that’s just life. You can tie yourself into knots trying to reconcile that with God. You know, “God caused that, God didn’t cause that.”

The point is that God is there with you, through all of these things. And God intends to bring the world back together – to reconcile these divisions, to restore those relationships and restore them to what they should be.

So our job is not to spend too much time spinning our wheels about why this happened. But to ask what part we can play in that process of reconciliation and restoration.

The first thing I’d say to that is, “Don’t tell me how to tweet.” There’s no right way to use Twitter; I’ll say whatever I damn well please. Don’t like it, unfollow!

But, I think what you have to understand, from that kind of secular perspective, is that to offer prayers is an act of piety. It refers things back to God in a fundamental sense. This is not about just shit happening – it’s about our life with God.

It’s also an expression of empathy. A lot of times people will say after somebody’s died and their survivors are grieving, “I don’t know what to say.” Well, say, “I’m sorry to hear of your loss.”

On one level, that doesn’t mean very much: Why should you apologize for somebody’s loss? But on an emotive level, it expresses that kind of solidarity with them. In the same way, to offer up prayers in a time of tragedy like this is to express solidarity with the victims. And if people are brave enough to express at least compassion for the people who have done wrong, to say on a very basic level, “I won’t be separated from these people. I won’t allow myself to be separated from the victims, from the perpetrators… I won’t allow myself to be dehumanized by the silence.”

You’re talking about a statement of common humanity.

Yes -- in some really deep ways.

And the challenge that comes out of that, at least in my mind, is when you’re talking more about say, gun violence in the U.S. – as opposed to a terrorist attack overseas, which we can’t really do very much about – is the challenge is really to the politicians. “Okay, you’ve expressed your solidarity, but what kind of action does that really lead to?”

The question is whether the praying, the empathy, the rituals, are just evasions of action.

And I want to be clear: That expression of solidarity and empathy is in itself an action. And it’s not nothing in a world in which people want to divide us up into good guys and bad guys. That’s important!

So when we’ve forgotten our common humanity, it’s important to be reminded of it.

Right. But, for someone who has a lot of responsibility and a lot of power to leave it at that, isn’t very responsible.

Some random guy on Twitter saying, Pray for so-and-so. Fine. Any one citizen doesn’t have a lot of power to effect change. When it’s someone who is helping to run the nation and could have the power to change things: Well, what are you gonna do?

You mention this in passing: The matter of praying for enemies, including violent ones. To what extent does that make sense, and do you feel conflicted by the issue?

I don’t feel conflicted by it, but then I’m a conflicted Christian. I don’t expect it to make much sense to someone who isn’t. From the Christian perspective, we always have to come back to the perspective that Jesus died for us all. He died for his enemies as much – if not more – than his friends.

And not just for the good people.

Not just for the good people, but the bad.

And, he chose – and this is so fundamental – he chose to go to his death rather than embrace violence. So to pray for your enemy is just profoundly to put yourself into his shoes and look at people not from that human perspective, but from God’s perspective. To say, There is something human about then. There is something worthy of love in them. Even as great a monster as they can be. It’s certainly not always easy to do that. But when you’re doing when you pray like that is to resist the dehumanization – to say, “I will not see you as something less than human.”

You find in that a good deal of freedom. Because you don’t have to react to them the way they have treated you. You’ve freed yourself from that cycle of violence. And now you have many more options.

Again, that’s not nothing, in the world we live in these days. Look at how many politicians are out there saying, “Let’s just carpet bomb ISIS!” It doesn’t work! If you spend any time thinking about it, you see that that doesn’t work.

If you read the news, you see it hasn’t been terribly effective.

That’s right – it just goes around and around. And once you understand how terrorism depends on overreaction from the authorities, you see the importance of de-coupling yourself from that.

Today you tweeted: “Reminder: this week we remember a man tortured to death as a potential threat to the security state.” I think I know what you mean here, but if you could tell us a little more about where you’re going with that.

The Romans were literally an occupying force in the state of Israel; it was a military occupation. The way Jesus’ enemies got the Romans to execute him was to say, “This guy wants to lead a rebellion against your occupation.”

And the Romans take the bait. If you think about what happens in that scene with Pontius Pilate: Pilate isn’t even convinced that Jesus is the threat he’s made out to be. But, he’s not going to take any chances, so he goes ahead, and kills him.

Because Jesus is a nobody. Pilate pays no price for executing just some other guy who’s getting wise about our presence in Palestine. He’s not even a military threat – but he might possibly be one. And the response is, “Torture him, kill him. Be done with it.”

One of the points is, This government is repressive and dysfunctional. And Jesus comes in way to say, both to the oppressed and the oppressors: “This isn’t working. There is a better way to do things.”