Former Nixon aide admits racist roots of America's drug war: Bernie and Hillary must own this issue and fix this injustice — now

The destruction of minority communities was a tactical decision by Nixon, the Dems need to stop this travesty 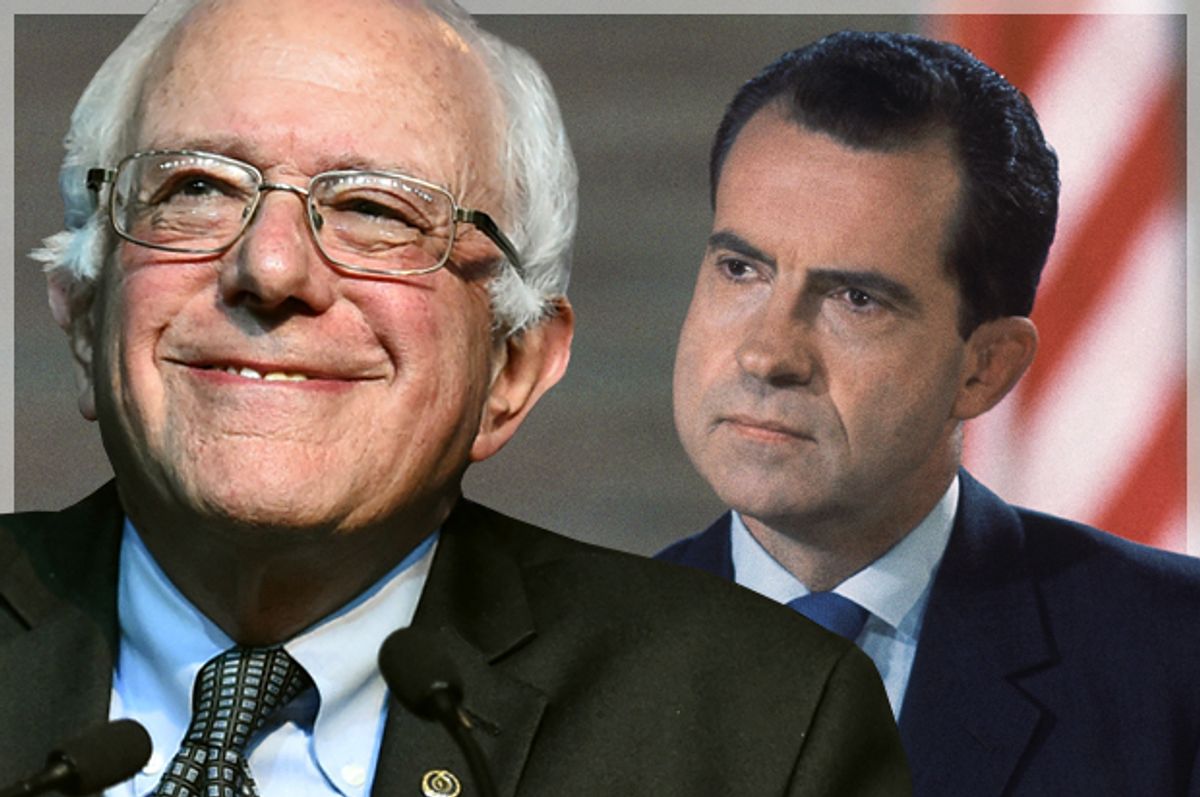 The drug war is an issue in this campaign, but it ought to be front and center. America's war on drugs hasn't worked – for anyone. It's been a boon to the pharmaceutical companies, who don't want the competition, and to the prison-industrial complex, who profit from locking up nonviolent offenders, but it's been a disaster for everyone else.

The April cover story of Harper's magazine explains not just how counterproductive the drug war has been but also, and perhaps more importantly, its racist roots. Written by Dan Baum, the article lays out the case for legalization, which is worth absorbing on its own. But it begins with a startling revelation from John Ehrlichman, one of Richard Nixon's close aides and a Watergate co-conspirator.

This quote is from 1994, when Baum was writing a book about drug prohibition. Baum tracked Ehrlichman down, hoping to get some insight into the drug war, which began in earnest during Nixon's administration. Ehrlichman's explanation was surprisingly blunt:

“You want to know what this was really all about?” he asked with the bluntness of a man who, after public disgrace and a stretch in federal prison, had little left to protect. “The Nixon campaign in 1968, and the Nixon White House after that, had two enemies: the antiwar left and black people. You understand what I'm saying? We knew we couldn't make it illegal to be either against the war or black people, but by getting the public to associate the hippies with marijuana and blacks with heroin, and then criminalizing both heavily, we could disrupt those communities. We could arrest their leaders, raid their homes, break up their meetings, and vilify them night after night on the evening news. Did we know we were lying about the drugs? Of course we did.”

There you have it, folks. The needless incarceration of a generation of brown and black men was not an unfortunate byproduct of the drug war – it was precisely the point. The wholesale destruction of communities was a tactical decision made by Nixon to erode and undermine his political opposition. The drug war was nothing more than a cynical tool, a diversion. And yet the war on drugs has persisted ever since, like a Frankensteinian monster eating away at the soul of our criminal justice system.

It's a great mystery that neither party has had the courage to own this issue. As Baum writes, it's sitting right there in plain sight, waiting to be seized:

“Depending on how the issue is framed, legalization of all drugs can appeal to conservatives, who are instinctively suspicious of bloated budgets, excess government authority, and intrusions on individual liberty, as well as to liberals, who are horrified at police overreach, the brutalization of Latin America, and the criminalization of an entire generation of black men. It will take some courage to move the conversation beyond marijuana to ending all drug prohibition, but it will take less, I suspect, than most politicians believe.”

We've been waging this misbegotten war for nearly half a century, with objectively horrid results. Thankfully, there are states leading the way on this issue – Colorado, Washington, Oregon, Alaska, and D.C. have all legalized pot, and many more states are likely to follow suit. But it's not enough. And although it starts with marijuana, it has to extend to all drugs.

This isn't theoretical; we know what happens when countries legalize drugs. As Baum points out, the Netherlands, Australia, the Czech Republic and others have legalized pot and in “none of these jurisdictions did marijuana become a health or public-order problem.” In Portugal, moreover, all drugs were decriminalized in 2001 – including cocaine and heroin. The results, Baum notes, “have been astounding.” The data is consistent and clear: legalization doesn't lead to massive spikes in drug use, but it does save money, destroy black markets, and reduce addiction rates by promoting more rehabilitation.

It's high time the presidential candidates took a more aggressive stand on drugs. With the exception of Rand Paul, who was promptly booted from his party, the Republicans are hopeless on this front. To his great credit, Bernie Sanders has said we must “rethink” the failed war on drugs, and he's introduced legislation to take pot out of the Federal Controlled Substance act. He also supported Vermont's recent decision to decriminalize marijuana.

Hillary Clinton, regrettably, has been too tepid. She supports a federal relaxation of marijuana research, but that's not exactly a step towards ending prohibition. “I do support the use of medical marijuana,” she said during the first Democratic debate, “and I think even there we need to do a lot more research so that we know exactly how we're going to help people for whom medical marijuana provides relief.” This is a symbolic half-measure, the kind of position a moderate Republican would take. It's not good enough, and Democratic voters ought to demand more.

Its racist and political origins aside, the drug war has been an abject failure – morally, legally, economically. It has to end, and Democrats must lead the way. If Clinton is the nominee, as she appears to be, she should be asked to clarify her position on drugs over and over and over again, until she finally arrives at a sane and defensible position. It's the right thing to do, and, as Baum pointed out, it doesn't require much political courage. This is an issue waiting to be owned by one of the two parties - let it be the Democrats.