These guys are utterly terrifying: The GOP primary marches on, but yesterday proved that both of the options are horrible 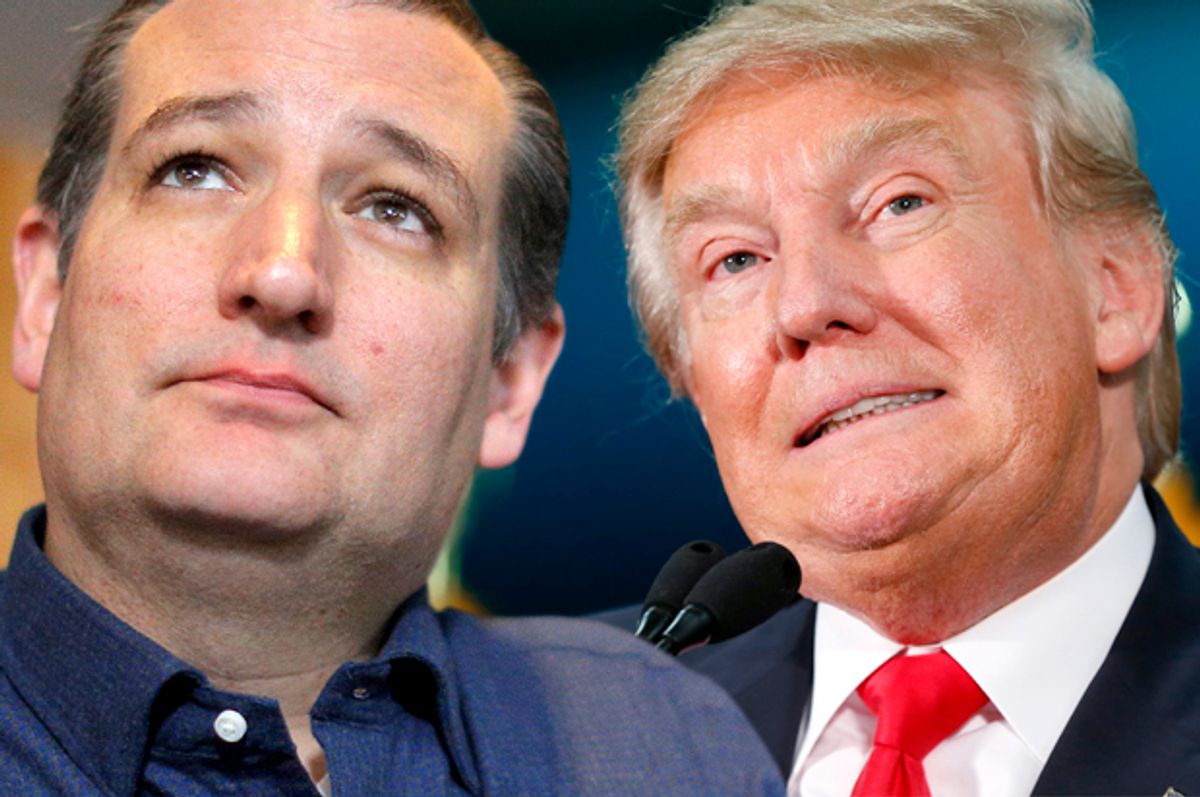 Last night's Republican primaries were always considered to be something of a watershed for the "Stop Trump" gambit. But there was an extra layer of interest in the outcome since both Donald Trump and Ted Cruz spent the day horrifying the entire world at the prospect either one of them might come anywhere near the presidency.

As for the "Stop Trump" gambit, obviously if Trump had seriously faltered in Arizona yesterday it might have signaled that his run had finally hit a roadblock. After all, it's hard to imagine a state more congenial to his message of building a big beautiful wall than the one which once passed a law requiring anyone a policeman suspects of looking like they might be "illegal" to show their "papers." He was endorsed by both former Governor Jan Brewer and Sheriff Joe Arpaio, two of the most virulently anti-immigrant icons in the nation. For him to lose that state, something would have had to go terribly wrong. It didn't. He won a big victory.

Ted Cruz, having lost decisively last Tuesday, needed to prove that he could actually be the vehicle to block the Trump juggernaut. While the delegate math doesn't look any better for his quest to win the nomination outright, his big win in Utah does help him stay in the hunt and make a decent case for himself at the convention if Trump does not come in with enough delegates to take it on the first ballot. Everyone said that the people of Utah prefer "nice" candidates but unfortunately they didn't have any to choose from so they apparently figured that Cruz was the least offensive. He got over 50 percent and took all the delegates.

The pundits all say the Stop Trump movement is now looking to Wisconsin in two weeks where they hope once more to deny him the delegates to become the legitimate nominee. So the fight goes on.

And after what we heard yesterday, it appears that Republican voters will be choosing between someone who could give Torquemada a run for his collection plate and the second coming of the Vlad the Impaler.

Upon hearing the news of the horrific bombing in Brussels, both Trump and Cruz took the opportunity to race to the media to condemn President Obama and set forth their own barbaric agendas of police state tactics. Their voters were impressed, giving each of them a big turnout and large victories in two different states.

Trump was naturally the cruder of the two and that's just how they like him. He tweeted this out early in the day, obviously unconcerned that anyone might think it crass to get out the vote on election day by using the bloody deaths of innocent people as proof of his superiority. But then crass is his middle name:

Once again he came this close to admitting that when he says we have have to do "much worse" than waterboarding, he's talking about using their methods.

Blitzer followed up by asking, "So should you start torturing him right away or would you see if he would cooperate and share information because Belgium Authorities, Belgium police say he has been talking?"  The answer was predictable:

"Well you know he may be talking but he'll talk a lot faster with the torture. If he would have talked you might not have had to blow up all these people dead and all these people horribly wounded, because he probably knew about it.  I would be willing to bet that he knew about this bombing that took place today."

He has absolutely no idea what he's talking about, but when has that ever stopped him? In truth this is an improvement on his original endorsement of torture, when he said, “Would I approve waterboarding? You bet your ass I would. In a heartbeat. I would approve more than that. It works. And if it doesn’t work, they deserve it anyway for what they do to us.”

And then there was this ignorant nonsense:

BLITZER: The military people say they oppose torture, that it's not part of the U.S. Military Code of Conduct.

Apparently dead generals are among his national security advisers.

Blitzer went on to patiently instruct Trump about how the CIA does our torturing because the military won't do it. We'll have to see if the lesson sticks over the next few weeks when the subject comes up.

Trump then gave a long interview to Breitbart in which he seemed to indicate that he thinks Brussels is part of America, when he said, "The terrorists are totally winning. The terrorists are making us look like fools.”  And he got really worked up over Hillary Clinton:

Later on Fox, he opined that the Paris and Brussels attacks are “just the beginning," saying once more that he's "a pretty good prognosticator. Just watch what happens over the years, it won’t be pretty. We’re going to get worse and worse ... it’s at least a small part of the reason why I’m the number one frontrunner, people are very concerned about this, and they’re very concerned about the security of this country.”

After that bleak "prognostication" they asked him what other steps he might take beyond "bombing the shit out of 'em", torturing, killing their families, building walls, setting up massive surveillance programs and banning Muslims, and Trump laid out his secret plan to end the war on terror:

“I guess I would just talk to the people and give them, frankly, a pep talk. We need spirit in our country, okay.”

But lest anyone fool themselves into thinking that perhaps the alternative might be better, Ted Cruz's press conferences and interviews were nearly as terrifying. Not that this was surprising. Last week Cruz unveiled his list of foreign policy "advisers" and it was quite a rogues gallery of assorted right wing extremists. As Graham West of the National Memo wrote:

One the one hand, Cruz has poached traditional neoconservatives, including names like Elliott Abrams of Iran-Contra indictment fame or Michael Leeden, Iraq and Iran war advocate extraordinaire. Yet on the other, he has courted some of the most extreme single-issue Islamophobes on the fringe of the right. Chief among these is of course Frank Gaffney, whose insane brand of Islamophobia includes believing that Saddam Hussein was behind the Oklahoma City bombing and warning against the infiltration of the American government (including the Republican Party) by members of the Muslim Brotherhood.

Upon hearing of the terrorist attack in Belgium, he issued a statement in which he said,

"Radical Islam is at war with us. For over seven years we have had a president who refuses to acknowledge this reality. That ends on January 20, 2017, when I am sworn in as president. We will name our enemy — radical Islamic terrorism. And we will defeat it."

He too seems confused about the location of Brussels, thinking perhaps it's located somewhere in Pennsylvania rather than on another continent. While it's certainly true that Americans are alarmed by terrorist attacks in other countries, it's a bit much to become hysterical and behave as if we were the victims and our government is responsible for the failure of security that allowed it to happen. (It's particularly rich coming from someone who's being advised by Michael Ledeen, who once wrote a famous screed declaring that the U.S. should attack France and Germany for failing to back America's invasion of Iraq, thus proving their true allegiance to the terrorists.)

Later in the day, Cruz issued yet another statement entitled, "We can no longer surrender to the enemy through political correctness," in which he declared:

We need to immediately halt the flow of refugees from countries with a significant al Qaida or ISIS presence. We need to empower law enforcement to patrol and secure Muslim neighborhoods before they become radicalized. We need to secure the southern border to prevent terrorist infiltration. And we need to execute a coherent campaign to utterly destroy ISIS.”

He tried to walk it back a bit under questioning but ended up sounding as ill-informed about effective counter-terrorism as Donald Trump, which isn't a good look.

He talked very tough all day, trying to look presidential, and then finally settled on his usual wing-nutty silliness about using the magic words "radical Islamic terrorism" and condemning President Obama for failing to cut short his historic diplomatic visit to Cuba to rush back to the White House and launch an invasion of a country that didn't attack us. Luckily, the president we currently have understands that keeping a cool head in a crisis is an essential attribute for a powerful world leader.

The two remaining candidates for the Republican nomination proved yesterday that they are anything but cool in a crisis. If this hysterical, over-the-top reaction to a terrorist attack in another country is any indication, if either become president we can expect they will shriek in horror and dive under their desk in the oval office with a copy of "My Pet Goat" if one were to happen here. They are, in Trump's words, panic artists.