Still looking for someone to blame for Donald Trump? Look no further than the right-wing media bubble

We know Trumpists are angry and xenophobic. But there's another explanation for their support we shouldn't forget 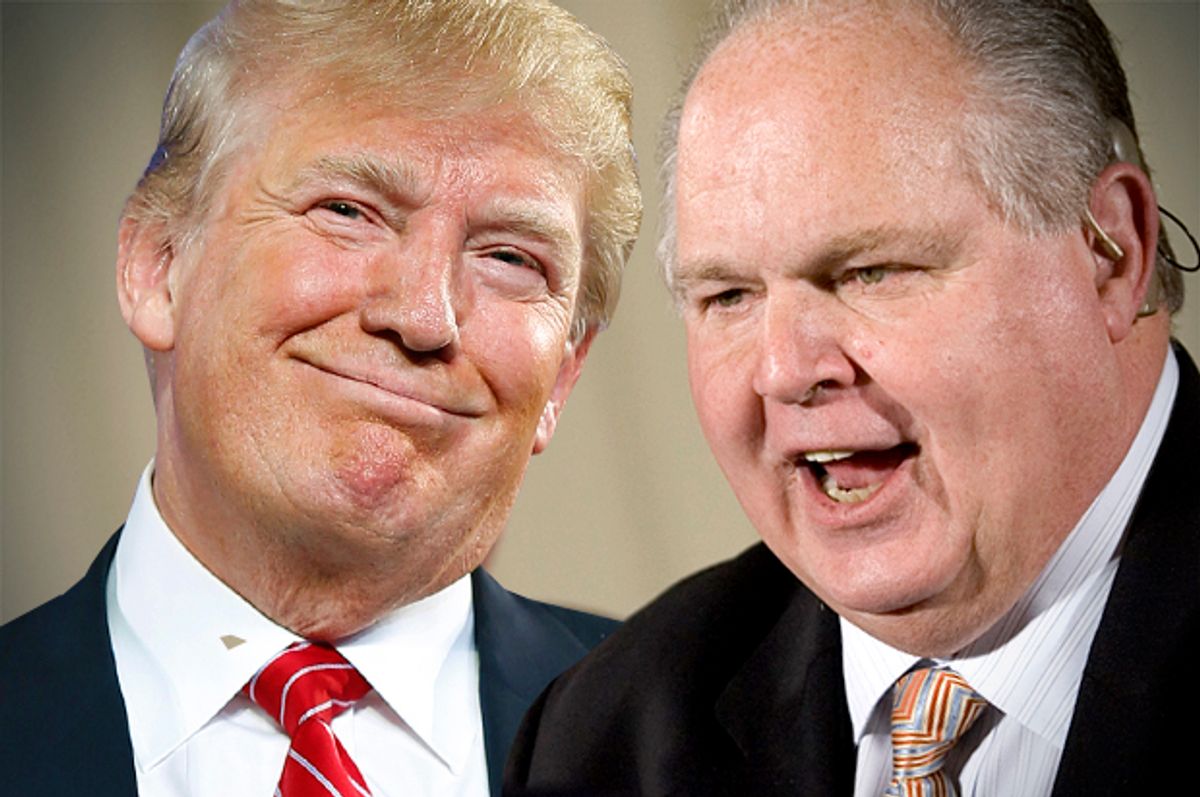 A couple of years ago, before the 2010 Tea Party wave election provided Republicans with the excuse they needed to avoid any form of introspection whatsoever, some of the more highbrow pundits on the left and right got into a debate over what they called “epistemic closure” (a.k.a., the conservative media bubble). It was an argument that, ultimately, the skeptics won.

Except for a few Official Reasonable Conservatives, Republicans dismissed the idea of epistemic closure. Not even 2012’s mortifying “skewed polls” delusion, which reached the uppermost echelons of Mitt Romney’s presidential campaign, woke Republican elites from their intellectual slumber. If any furtive steps toward reform were taken after Romney was defeated, they were obliterated by the party’s success in 2014.

Once again, there was no introspection. Once again, there was no imperative to reform. The RNC’s 2013 “autopsy” led to nothing. David Frum remained in the wilderness. And now Republicans — who seem to have learned nothing and forgotten nothing — are a hair’s breadth away from nominating Donald Trump, one of the most hated men in America, as their presidential candidate.

As the Washington Post’s Greg Sargent notes, there’s a connection here. Because while Trump’s rise is often attributed to the GOP base’s visceral loathing of the party establishment, that’s not their only motivation. Neither is raw bigotry. They’re both major elements, to be sure. But they’re not the only reason why the establishment suddenly finds itself in the ironic position of relying on Sen. Ted Cruz as a Plan B.

What else can explain what Sargent describes as a “disconnect” between the elite and the base? In two words: epistemic closure. Because it’s not just that Republicans like Trump more than the other candidates; it’s also that they live in an alternative media reality. And for more than a year now, that media has been telling them — wrongly — that Hillary Clinton simply cannot win.

Here’s how Sargent puts it:

[M]aybe GOP voters simply don’t believe that there’s any way Clinton could beat Trump — let alone that she might defeat him decisively — since their leaders and media sources have told them for months that Clinton is a hopelessly flawed, widely despised candidate who is eternally on the verge of getting buried by a new revelation about Benghazi or her email arrangement. It would be an ironic outcome if that ended up playing a role in complicating GOP elites’ efforts to rid themselves of the Donald, wouldn’t it?

Now, assuming there’s at least some truth to the theory (and considering how popular Trump is with media cranks and conspiracists like Michael Savage and Alex Jones, I see no reason to assume there isn’t), and assuming that nominating Trump or Cruz would be an electoral catastrophe (extremely likely), what GOP leadership has on its hands is an enormous Gordian knot.

They can disown the most intellectually irresponsible and emotionally atavistic  elements of the parallel media universe that’s long been a key part of the GOP coalition; or they could keep on doing what they’ve been doing since 2010 — i.e., nothing — and resign themselves to Trump, as well as the copycats that are sure to follow.

In the grand scheme of things, the latter seems like the better option; but whatever their decision, they lose. Then again, nobody ever claimed that Faustian bargains were cheap.