The recipe for a Trump defeat: Don't let the primaries fool you, the ingredients are there for a happy November for Democrats

From a brokered convention, split GOP, job growth and Obama's approval rating, the odds against Trump are "yuuge" 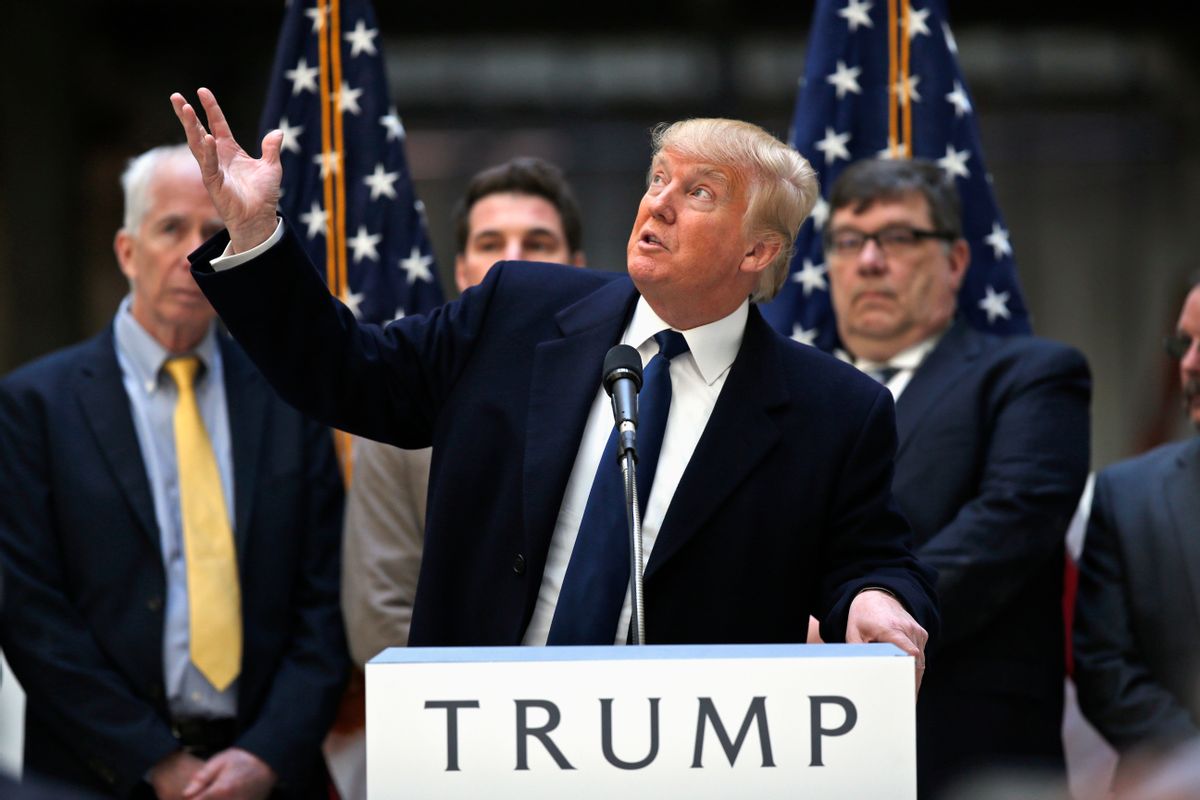 Donald Trump's worldview is incoherent. To say he has a worldview at all is probably generous. He's a grab bag of ethno-nationalist platitudes and half-articulated grievances, with a menagerie of grade school insults sprinkled in between. His blend of bombast and bigotry has catapulted him to the top of the GOP polls, however, and very likely to the nomination.

It will also cost the Republicans the White House in 2016.

Trump has splintered the party, exposed its tenuous fault lines. The culture wars and religious pandering have held the base together, but traditional conservatives – voters who are socially moderate but fiscally conservative – have been alienated by the emergent extremism. Joel Kotkin of the Orange County Register put it well: The GOP now “consists of interest groups that so broadly dislike each other that they share little common ground.”

Trump's rise makes a lot more sense against this backdrop. He's exploited the party's internal divisions by appealing solely to voter frustration. “For years the GOP failed to give people a clear sense of our principles and plans.” Republican Sen. Ben Sasse recently told the Washington Post. “Donald Trump has filled that vacuum with lots of showmanship, hooey, and bluster, but he's done more than just that. He's waged an effective war on almost every plank of the Republican Party's platform.”

Sasse is half-right: Trump has indeed filled a vacuum, but he's done so, in part, because the Republican Party doesn't have a consistent platform. The GOP drifted away from whatever principles it once had and is now a jumble of malcontents and culture warriors. Which is why Trump's indignant bullshit routine resonates so deeply.

That's a recipe for defeat in November.

To make matters worse, President Obama has a 50 percent approval rating – the highest it's been in two years. The economy has recovered; unemployment has dipped below 5 percent; Obamacare is working; and nearly 14 million jobs have been created in the last 69 months. History suggests these numbers will favor the Democratic Party in the general election.

Although the Democrats are split between Bernie and Hillary supporters, the party isn't nearly as fractured as the GOP. In any other year, Clinton's polarizing numbers would be a serious problem for Democrats. But when the alternative is Trump, Clinton has much less to worry about. While the latest polls give Clinton a narrow advantage over Trump in a general election (roughly 6 points), that gap is likely to grow when the rest of the country becomes more politically engaged. Trump's toxicity can only increase with more exposure to independents and moderates, many of whom aren't paying much attention to the campaign yet.

When you add to all of this the likely possibility – if not inevitability – of a brokered Republican convention, the doomsday scenario for the GOP is hard to escape.

Politico's Doug Sosnik has argued that the writing was on the wall in October of last year:

“Regardless of how you do the math, the current environment paints a picture of a Republican Party at the verge of implosion during the most critical period in the presidential campaign. Assuming little changes, years from now people will look back at the decisive nine-day period in mid-October last fall when the stage was set for the 2016 elections. In this narrow window, Hillary Clinton soundly routed Bernie Sanders in the first and single most important Democratic debate of the season, Vice President Biden announced that he wouldn't run for president and Clinton publicly demonstrated her strength and fortitude during 11 hours of testimony in front of the House Select Committee on Benghazi...Meanwhile, loudly and in full view, sitting high atop the polls facing little or no resistance, Donald Trump was gathering steam toward the Republican nomination and a backward-looking Republican Party was gasping its last breath.”

I don't agree with all of that, particularly the part about Clinton routing Sanders in the first debate, but the broader point holds. The Republican Party has been bursting apart at the seams for a long time. Trump has put them out of their misery, and he did it by capitalizing on their failures.

The Democrats will surely thank him for his efforts in November.