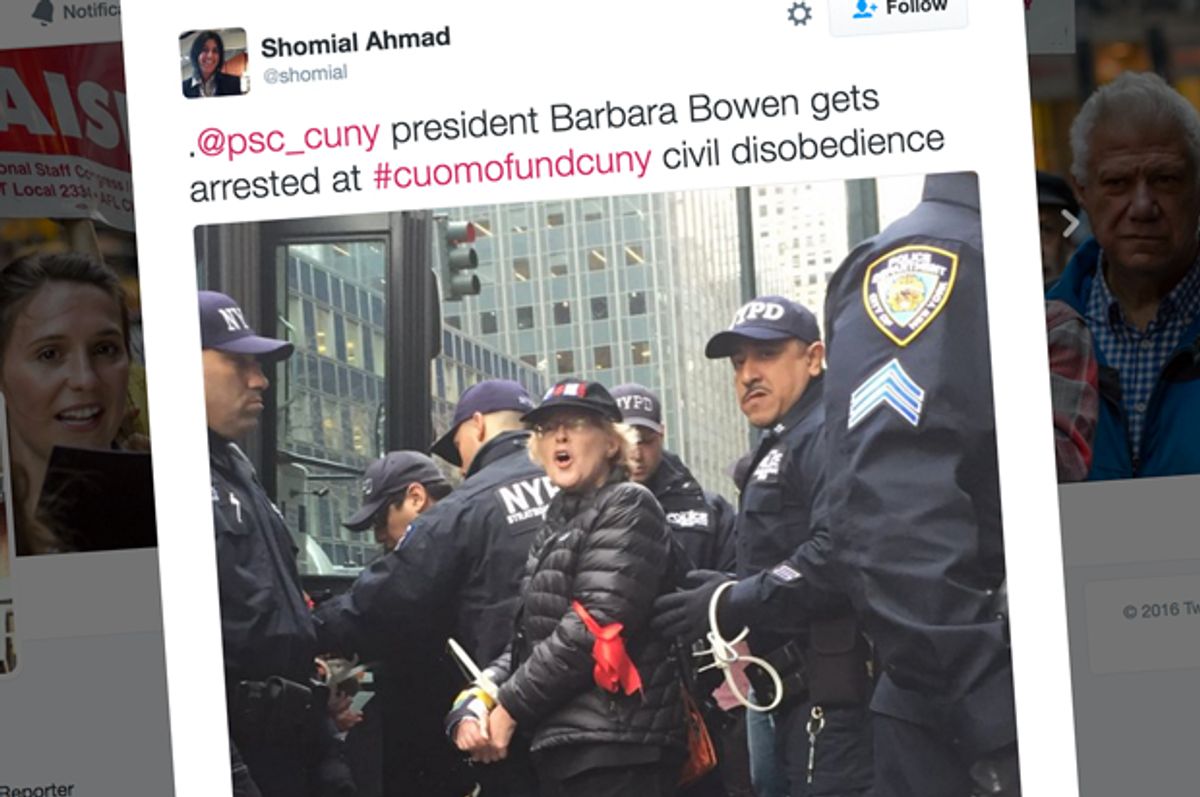 Activists held a die-in protest outside the governor's midtown Manhattan office on Thursday, in which 41 people were arrested on charges of disorderly conduct. Among those arrested were faculty, staff and students from the City University of New York, or CUNY, system, along with two New York City council members, Inez Barron and I. Daneek Miller.

Cuomo had proposed in January shifting $485 million, a third of the state's CUNY costs, onto New York City. Friday morning, however, Cuomo's spokeswoman announced that New York state will pay the full $1.6 billion in CUNY's government operating costs, with the requisite that the state legislature hires a management efficiency expert.

Salon spoke with Francis Clark, a spokesperson for the Professional Staff Congress union, which represents more than 25,000 faculty and staff at CUNY and organized Thursday's protest.

"The goal of the rally and the civil disobedience action was to press the governor and legislators, but particularly the governor, to increase funding for CUNY, to freeze tuition and to fund retroactive pay for the 25,000 faculty and staff at CUNY who have worked for six years without a raise," Clark explained.

"That is hurting the ability of CUNY to provide a quality education for its half a million students, because the university is now struggling to recruit and keep faculty and staff, because their salaries are so much lower than other colleges and universities in the area," he continued.

"We're actually having faculty jump ship; we're having department chairs report that their efforts to recruit new faculty are failing, because they see how expensive it is to live in New York, and then they see that CUNY faculty might make $7,000 or $10,000 less than somebody at a public college in Massachusetts or New Jersey, and they go elsewhere."

Critics are still worried, however, about the lack of clarity surrounding the future funding for CUNY, and say the budget shortfalls the public education system is experiencing are a manufactured crisis.

If funding for CUNY had grown along with the state's budget since the 2007 to 2008 financial crash, the public education system would have had $637 million more, according to analysis by the office of New York City Comptroller Scott Stringer.

Approximately 45 percent of the CUNY system's $3.2 billion budget comes from the state, and its per-pupil funding has fallen 17 percent since the recession.

Before Cuomo proposed moving the large financial burden onto CUNY, the public education system had a $51 million shortfall in it budget.

The CUNY Professional Staff Congress union spokesperson said Gov. Cuomo's walk back is a small victory, but does not go far enough.

"There was a huge public backlash when he first announced the executive budget," Clark told Salon. "But all this does is push CUNY back to where it was, which was dramatically underfunded."

"Even before this brouhaha over the state budget and the governor's plan to shift the costs from the state to the city, CUNY was underfunded, the faculty contracts were unresolved, the students were paying $300 a year more in tuition and departments were cutting programs," he added.

Approximately 25,000 faculty have worked at CUNY without a contract since 2010, and have not received any raises in this time. Another 10,000 lower-paid workers have gone more than seven years without a raise.

Presidential candidate Bernie Sanders, who has proposed making public universities tuition-free for Americans, sent a letter to Cuomo in December urging him to stop cutting funding for CUNY and to fund contracts with raises for faculty.

Critics portray Sanders' proposal as radical, but CUNY was free when it was first established, as were many public universities in the U.S. Moreover, many public higher education systems throughout the world, and particularly in Europe, are free or very inexpensive.

"What is really needed, the real discussion should be about the investment that has been lacking for years under Gov. Cuomo," Clark said.

"We've all gone through a huge struggle over just restoring CUNY to where it was, which is underfunded, under-resourced, austerity-level funding."

Salon also spoke with Susan Kang, an associate professor in the department of political science at CUNY's John Jay College of Criminal Justice and a 27-week pregnant mother who was arrested at the die-in protest Thursday night.

"I was willing to get arrested because I wanted to contribute to the escalation campaign of the union in response to the funding cuts to CUNY," Kang said. "I think the escalation is very important because the current national trends when it comes to funding public education is really scary. The union is one of the most organized and responsive groups fighting to protect CUNY, in a way that will benefit so many people of the broader New York City community."

"Our own governor seems to want to play political chicken with public higher education in New York state, Kang told Salon. "It's especially shameful given how CUNY is a historically democratic and accessible university system that has helped so many working class, immigrant and first-generation college students get an excellent education."

The CUNY professor says she thinks Cuomo can be pressured to shift positions and do the right thing, "as he did on issues like fracking, but he needs a lot of prodding."

"I think this is part of a larger attempt to absolve the state — which has budget surpluses — from its responsibility in funding public higher education institutions," Kang said.

She added, "Underfunding CUNY would truly jeopardize one of the public institutions that truly serves the 99 percent of New York City."