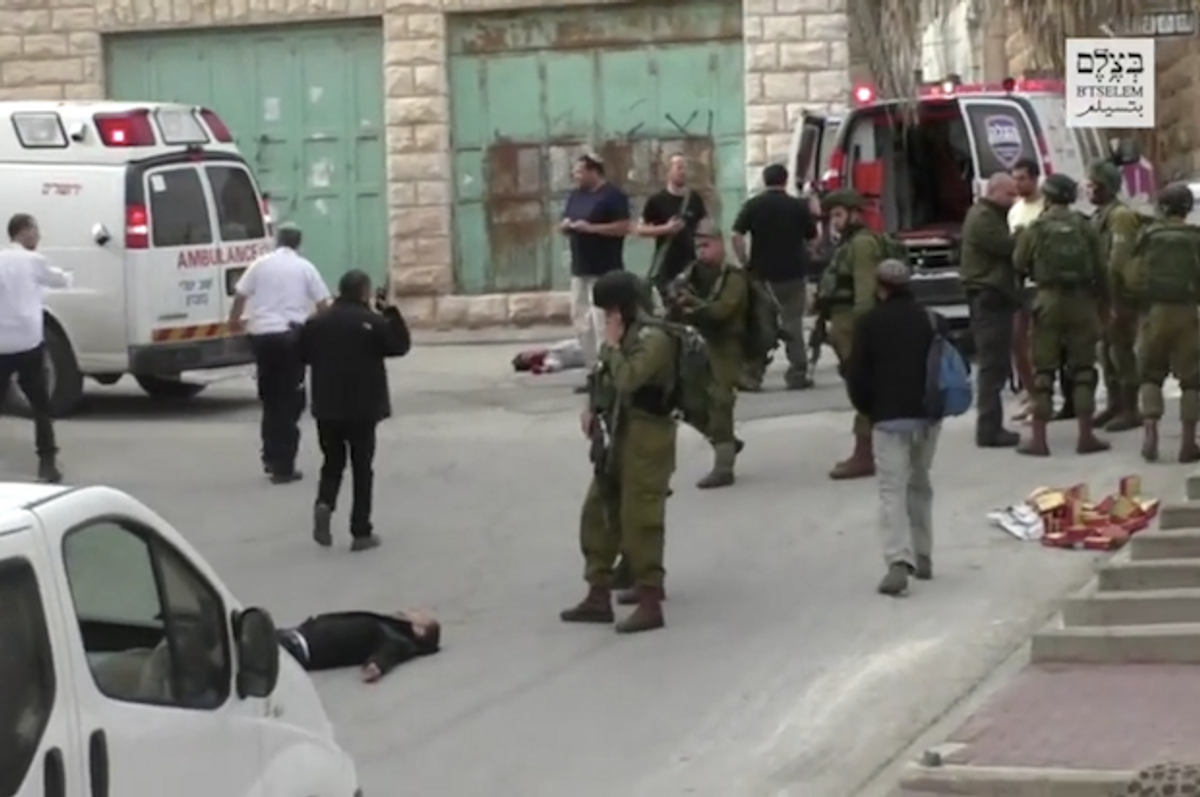 The incident took place on Thursday in the city Hebron in the West Bank, where Palestinians have lived under illegal Israeli military occupation since 1967, and where their land has for decades gradually been colonized by illegal Israeli settlers.

Video footage shows one of the men, Abed al-Fattah Yusri al-Sharif, 21, lying on the ground, incapacitated, before an Israeli soldier shoots him in the head at close range.

(Warning: Although the blood has been blurred out, the video may be disturbing to some viewers.)

In the description accompanying the video, B'Tselem stresses that the law makes it clear that shooting an assailant with intent to kill is only allowed in cases where the assailant endangers the lives of others. In this case, with the assailant injured and incapacitated on the ground, he clearly no longer posed any threat.

The Israeli human rights organization says the killing is the result of hateful rhetoric from politicians and an overall atmosphere of dehumanization of Palestinians within Israel.

Journalist Dan Cohen, a correspondent for the progressive Middle East-focused news site Mondoweiss, notes in his report on the story that Israeli government officials have openly called on police to carry out such summary executions.

The pro-Israel news outlet the Times of Israel reported in October, "Even centrist politicians have encouraged police officers to shoot attackers with the intention of killing them."

"You have to shoot to kill whoever takes out a knife or a screwdriver or whatever," insisted Israeli lawmaker Yair Lapid at the time.

For Palestinians living under illegal Israeli military occupation, violent repression is a quotidian burden. The U.N. Office for the Coordination of Humanitarian Affairs reported that Palestinians were injured 14,000 times in the year 2015 alone; another 136 Palestinians were killed. These were the largest figures the U.N. agency had since it began documenting the violence in 2005.

According to a report by the NGO Defense for Children International-Palestine, Israeli forces shot at least 30 children across the occupied West Bank and East Jerusalem in the first three months of 2015.

Moreover, attacks by illegal Israeli settlers are on the rise. Extremist settlers have firebombed the homes of Palestinians, or run over Palestinian children with their cars.

On the other side, Palestinians have also attacked Israelis, stabbing them or attempting to hit them with their cars. These incidents, in which Palestinians attack Israelis, often get press coverage in the U.S., while cases in which Israelis attack Palestinians rarely get as much media attention.

For almost six months, this violence in Israel-Palestine has escalated to even higher levels than usual. At least 203 Palestinians have been killed since October, according to a count by prominent Palestinian news outlet Ma'an. In the same time period, approximately 30 Israelis have been killed.

Many of the Palestinians killed allegedly tried to stab Israelis. What is often left out of media reports on this violence, however, is the fact that the vast majority of Palestinian attacks take place in the illegally occupied territories, and are frequently directed at Israeli occupation soldiers, not civilians.

Journalist Ben White used the Israeli government's own data to show how this violence is often distorted.

According to the Israel Security Agency, from October to December 2015, there were 1,170 "attacks" by Palestinians — although 75 to 80 percent of these attacks were done with firebombs, which is often used to describe Molotov cocktails Palestinian youths throw at the armored vehicles of the occupying Israeli military. Just 1 percent of these 1,170 attacks took place inside Israel proper.

Of the 85 stabbings that took place in this time period, 86 percent were in the occupied West Bank and East Jerusalem, White found.

There is little indication that the violence will end anytime soon, as illegal settlements continue to grow in the occupied Palestinian territories, and poverty and desperation get worse for the Palestinians living under military occupation.

The U.S. government is complicit in much of this, as it gives approximately $3.1 billion in unconditional military aid to Israel every year.

Since the illegal military occupation began in 1967, the U.S. has given Israel well over $100 billion in military aid. And this enormous sum does not consider the intangible yet invaluable political and diplomatic aid the U.S. has provided Israel, such as the scores of vetoes of U.N. Security Council resolutions the U.S. has done on Israel's behalf.

"Every single thing the Israelis do today is with the total approval and total financing of the United States," explained renowned Israeli journalist Gideon Levy in a recent talk.

Levy described the conditions in Hebron, the Palestinian city in the occupied West Bank where this knife attack occurred, as those of apartheid.