Limbaugh bitterly defends sexual harassment, and shows why so many conservatives love Trump in doing so 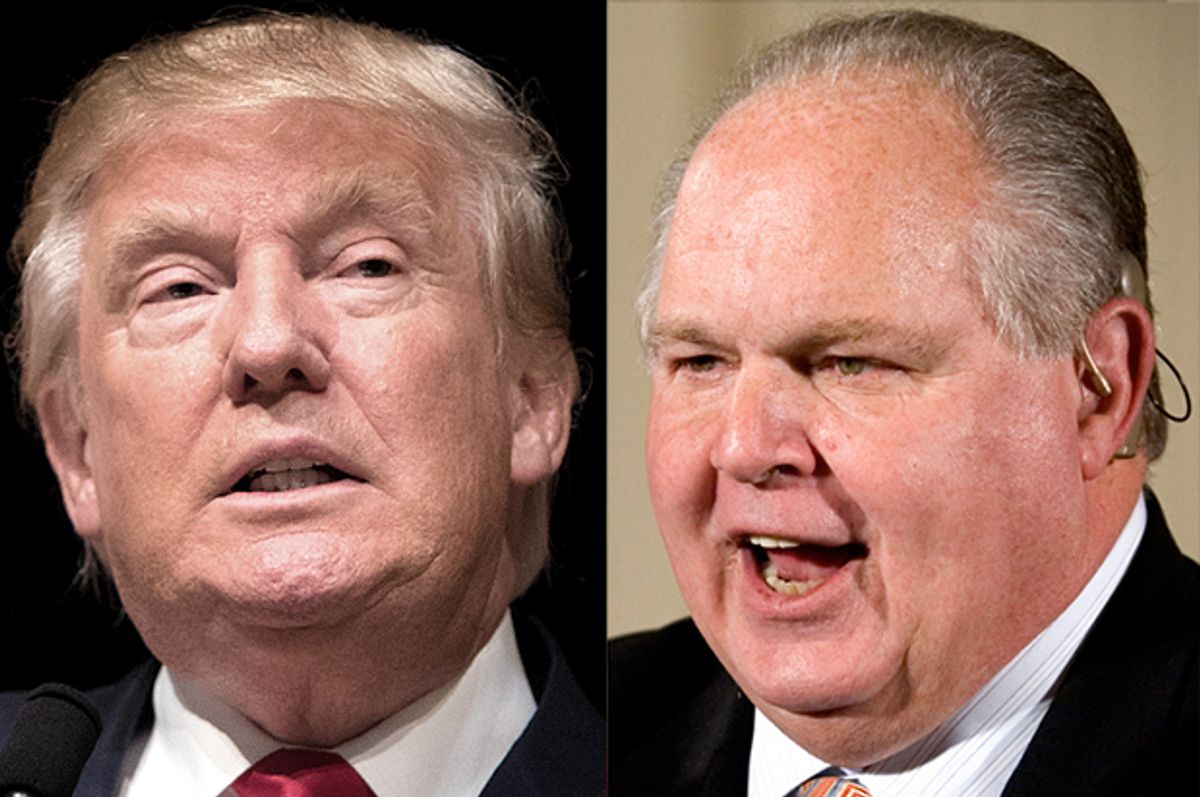 Two words that explain better than any other why Donald Trump is winning the Republican primary: Rush Limbaugh. Oh, he'd deny it. While he has occasionally been Trump-curious on his show, Limbaugh's enough of a party hack to have been trying gently to nudge his audience towards someone more like Ted Cruz.

But the truth is that Limbaugh has done more to create and popularize the image of a conservative as a leering jackass, the guy who flops around acting like a victim of feminism the second he's asked to treat women as human beings instead of objects to dominate and humiliate in a pathetic bid to prove his manhood. And with his popular radio show, he helped really shape the idea that this at least one way to be a conservative, paving the way for Donald Trump to turn the sexual harassment schtick into a bid for the presidency.

Limbaugh has clearly not learned his lesson, because he was at it again on Thursday, bellyaching about how victimized he is because women talk back to sexual harassers.

The occasion was a feminist speech that Michelle Obama gave in Argentina, where sexual harassment is so serious a problem that there have been attempts to outlaw catcalling on the streets. Obama's speech was wide-ranging, but at one point, she did speak about her own experiences with catcallers.

"As I got older, I found that men would whistle at me as I walked down the street, as if my body were their property, as if I were an object to be commented on instead of a full human being with thoughts and feelings of my own," she explained, before moving on to talk about how hard women have to work to shrug off the abuse they get simply for existing.

Obama's claim that her body is her own and doesn't belong to any random man she walks by on the street set Limbaugh's outrage meter to "ballistic." It truly is an epic rant, one that really strains to break records in how many flatly untrue ideas can be squeezed into a single rant.

"She's sitting as first lady of the United States and she can't get past it, she can't get over it, I'm telling you these people are bitter," he whined. "They have not gotten over it, all of this is personal, and they haven't gotten rid of their anger."

The hypocrisy is truly breathtaking, as the very bread and butter of the conservative movement, especially its propagandists like Limbaugh, is grudge-holding and bitterness, usually over stuff that isn't even real.

But all that is neither here nor there, because he's wrong on the facts. Obama's speech was not bitter, but optimistic.

"I decided not to listen to the voices of those who doubted or dismissed me. Instead, I decided to listen to my own voice," she said, making it clear that the point of her speech was to encourage other women and girls to rise above.

But the meat of Limbaugh's rant was an incoherent defense of sexual harassment, which like all good defenses of sexism, starts with a man lecturing women about how he knows better than they what they want.

"Here's the bit about sexism, do you know how many women would love being whistled at walking down the street?" Limbaugh railed.

While you can always dig up some woman who is so hungry for male approval she'll sign off on this, considering that Limbaugh is denouncing a woman who says she doesn't like it for a crowd of women who clearly don't like it in a country where women hate it so much they tried to ban it, I think we can safely write this one off as wishful thinking combined with gross mansplaining. Somehow I doubt it if Limbaugh would himself think it's so awesome to be followed down the street by some guy — perhaps one that looks like Rush Limbaugh — whistling and demanding that he shake that ass, and then calling him a "bitch" when he doesn't play along.

If you wonder how so many Republican voters are happy with Trump and his belief that women literally only exist as receptacles for male sexual attention, here's your answer. One of their most popular radio talk show hosts cannot imagine that women have any other purpose for leaving the house but to attract attention. Women don't have jobs or things to do, like men! They have two modes: Sex objects or sitting at home, powered down.

And then the victim complex: "I'm sorry, Mrs. Obama, but God made me a man, and as such I can't help noticing a woman who I think is attractive. And I'll be damned if I'm going to shut up and not tell her so."

I'm sorry, Mr. Limbaugh, but I'm a normal human being, and as such, I can't help but have a strong desire to see a big globule of spit hit you in the eye and slowly slide down your obnoxious face. And I'll be damned if I'm going to let the basic norms of human interaction stop me from expressing myself.

Just kidding! I'd never spit on Rush Limbaugh, as pleasurable an activity as that might be, because I'm a grown-up and have basic self-control. Which is all that women ask of men when it comes to feeling an urge to bully a woman with fake "compliments" in order to extract attention you know she does not want to provide.

The little rant of Limbaugh's is not an anomaly. He built his entire talk radio empire in no small part off telling sexist men that their urge to be nasty to women is just healthy man stuff and that feminists are oppressing them by asking them to act like adults. Which is why there was a certain inevitability to the Trump campaign, even if it's easier to say so in hindsight.