The Justice Department's Apple crusade gets even sketchier: Why the latest revelations raise troubling new questions

For months, the DOJ has been trying to get Apple to crack a terrorist's iPhone. But what if they didn't need Apple? 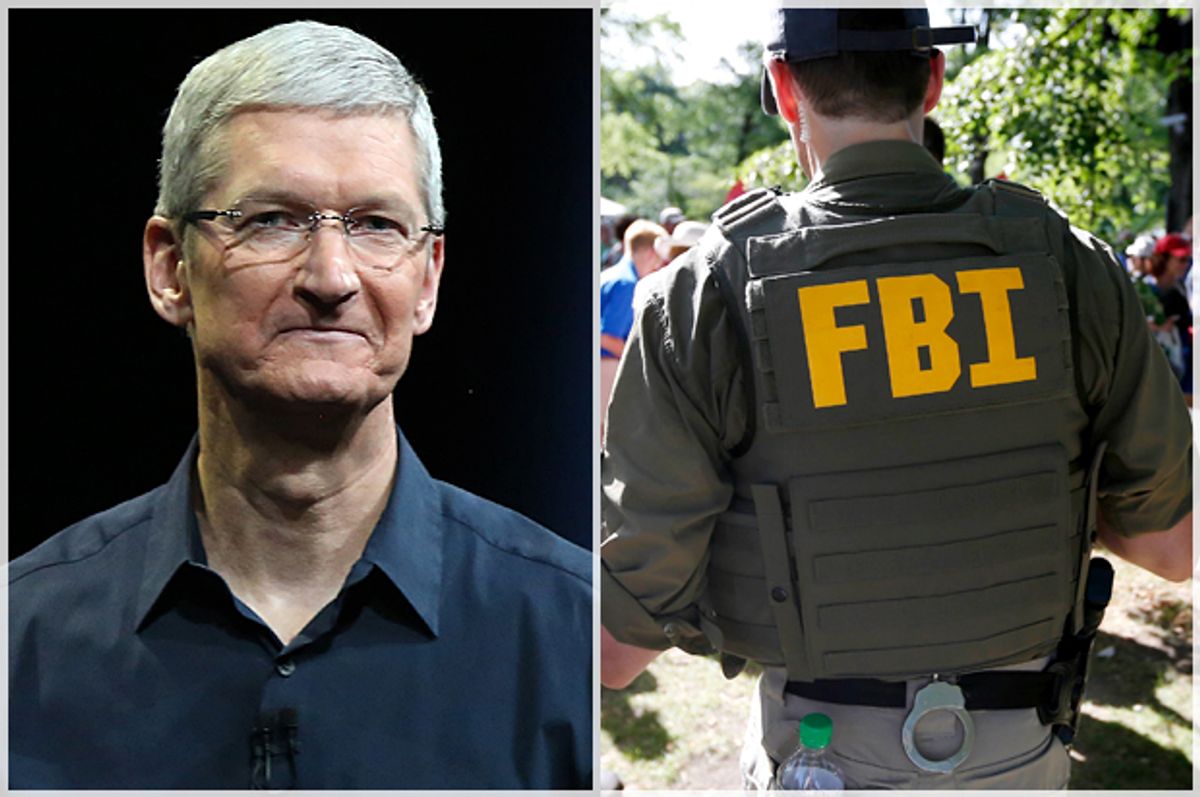 On 19 different occasions across three briefs, the Department of Justice claimed only FBI or Apple would be able to break open the work-issued iPhone 5C of San Bernardino shooter Syed Rizwan Farook. "The assistance sought can only be provided by Apple," the DOJ claimed on Feb. 16, when they first asked for an All Writs Act ordering Apple to comply. "Apple’s assistance is also necessary to effectuate the warrant," DOJ said when it asked Magistrate Judge Sheri Pym to enforce the order on Feb. 19. "Without Apple’s assistance," DOJ repeated on March 10, "the government cannot carry out the search of Farook’s iPhone authorized by the search warrant."

Then, on March 21, the day before a hearing in what looked to be an increasingly uphill fight for the government to convince the court to enforce the order, the DOJ told the court something else: "On Sunday, March 20, 2016, an outside party demonstrated to the FBI a possible method for unlocking Farook’s iPhone," the DOJ explained in asking to delay a court hearing on March 22.

All of a sudden, the Department of Justice admitted the possibility that someone besides Apple or the FBI might be able to open the phone, an issue that had been debated in an earlier Brooklyn fight over All Writs Act orders served on Apple.

Wednesday morning, multiple outlets repeated (but did not independently confirm) Israeli reports that Israeli security firm Cellebrite was the outside party in question. Cellebrite has thus far been publicly coy about whether they were assisting the FBI, though they do have a contract to conduct such services and claim to be able to break iOS 8 phones, one release behind what runs on Farook's phone.

More interesting still, on Feb. 16, DOJ obtained a warrant to get Cellebrite's help to break a iPhone 6, a more recent model (though one that may still be running the older operating system Cellebrite claims to be able to break). The DEA Agent who described the phone was not sure Cellebrite would be able to crack the phone, in which case, he explained, the DOJ would ask Apple for help. Even if Cellebrite were able to crack that phone, that still doesn't mean it could crack Farook's. But it is testament that DOJ remained in an active discussion with Cellebrite about cracking late model iPhones even as it remained utterly silent about that possibility in the fight against Apple, and even as it piled up 12 other cases in which it had demanded Apple's help claiming only the tech company could comply, even with more basic phones.

Whether or not Cellebrite is the outside party helping the government, that distinct possibility raises real questions about the story the DOJ has offered for its attempts to break into this phone. Not until it  submitted its request to delay the hearing did anyone from DOJ admit it always knew someone besides Apple and the FBI might be able to crack the phone. "We have been working tirelessly during this entire time to see if there's another way to do this," prosecutor Tracy Wilkinson revealed in the phone hearing that day after a month of sworn briefs insisting there was no other way to get inside the phone.

And while FBI Director Jim Comey claimed in a congressional hearing on March 1 that, "We’ve talked to anybody who will talk to us about it, and I welcome additional suggestions," researchers who called FBI with potential solutions report being blown off by the FBI.

Which leaves the impression that DOJ -- and the FBI and DEA, law enforcement agencies that are part of DOJ -- have been picking and choosing when they claim they need Apple's help and when they can ask a regular forensic contractor to do the work. It leaves the impression they wanted to force Apple to weaken iPhone security features, even while there were other ways of getting in the phone.

It's a question the Feds are still trying to dodge. In an editorial earlier this week, the Wall Street Journal expressed, with shock, "Now we learn the FBI, far from exhausting all other practical options, had been pursuing such non-Apple leads all along." In a letter to the editor in response, FBI Director Comey denied a different claim. "You are simply wrong to assert that the FBI and the Justice Department lied about our ability to access the San Bernardino killer’s phone," Comey wrote, which says nothing about whether DOJ knew, but did not reveal, that a trusted contractor like Cellebrite might be able to crack the phone.

If DOJ knew all along that Cellebrite or some other DOJ contractor might be able to or even even actively working on a way to crack open the phone, it should have disclosed that. On top of all the other dubious facts about this fight -- starting with the high likelihood there won't be evidence of value on the phone -- it sure adds to the questions about whether DOJ cynically exploited a terrorist attack to try to weaken Apple's security.