California will increase its minimum wage to $15, either through Governor Jerry Brown or at the ballot box 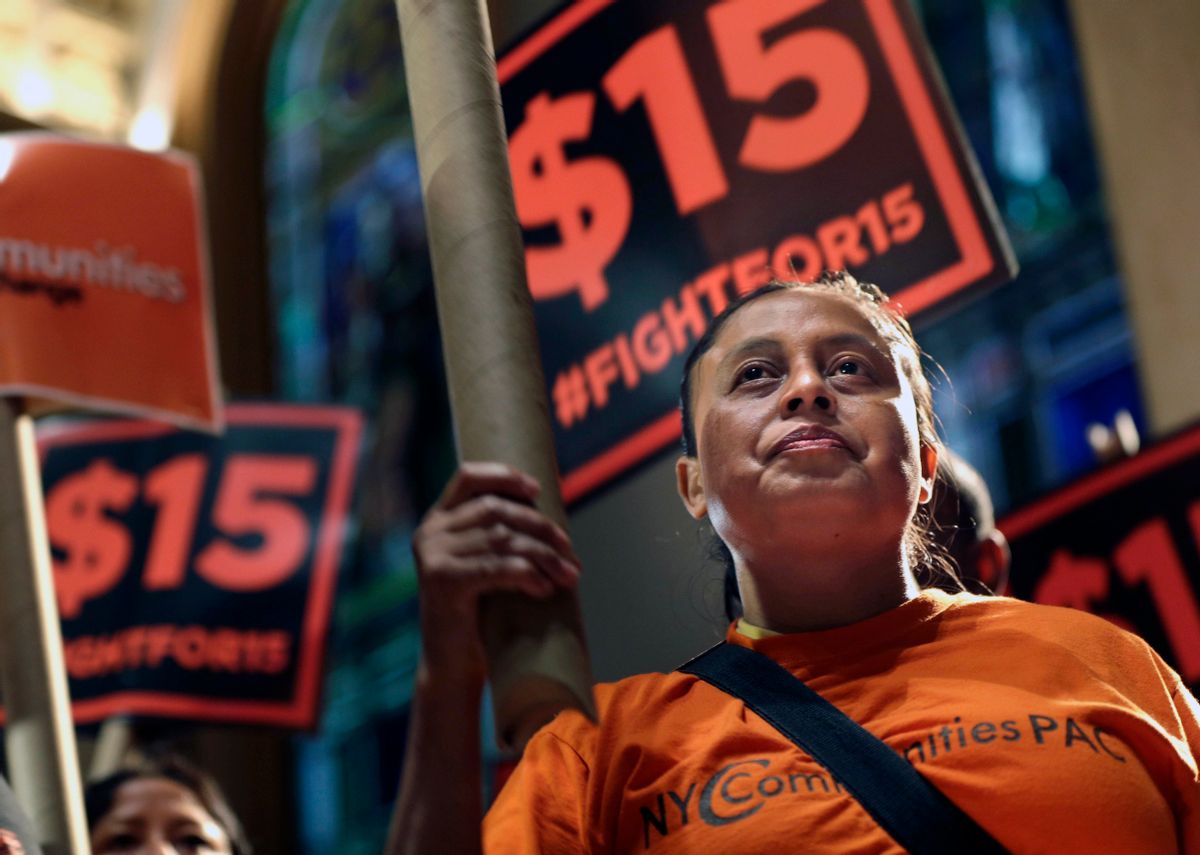 FILE - In this June 15, 2015, file photo, demonstrators rally for a $15 minimum wage before a meeting of the state Wage Board in New York. The New York state Wage Board is expected to recommend a higher minimum wage for the industry during a meeting, Wednesday, July 22, 2015, in New York City. Board members say they support an increase, though they havent offered a specific amount. (AP Photo/Seth Wenig, File) (AP)
--

It was bound to happen.

California's two biggest cities, Los Angeles and San Francisco, recently passed their own minimum wage hikes to $15 an hour and in an effort to avoid a costly and contentious battle over the airwaves this fall, Democratic lawmakers and major labor unions hashed out a deal over the weekend to gradually raise the state's minimum wage to $15 an hour before an initiative calling for a more sudden increase appeared on statewide ballots later this year.

Governor Jerry Brown is set to sign the landmark legislation into law, according to the Los Angeles Times, making the Golden State the largest experiment in the national debate over the minimum wage. According to the National Employment Law Project, no other state has ever passed such a large increase in the minimum wage. California already has one of the highest state minimum wages in the country at $10. The deal would increase that to $10.50 an hour in 2017 and then $1 every year until it reached $15 by 2022, allowing the governor the power to halt the program at any time if negative economic impact is observed.

California voters were already set to decide on the matter of a $15 minimum wage, a movement headed by fast-food workers in the wake of growing national discussion on income inequality around the Occupy Wall Street protests. The "Fair Wage Act of 2016" is an initiative supported by the Service Employees International Union-United Healthcare Workers West (SEIU-UHW) to raise the state's minimum wage to $15 by 2021, a full year before the deal reached by lawmakers. The measure only qualified for the November 8 ballot last week, but it is clear that Brown, who signed a minimum wage increase from $9 to $10 back in 2013, was eager to avoid a public battle with unions while public polling shows widespread support for a $15 minimum wage in the state.

"This is a very big deal," said Paul Sonn, the general counsel to the National Employment Law Project, a national research and advocacy group. "It would mean a raise for one of every three workers in the state." That is more than 5 million low-paid workers, or 38 percent of the state's workforce receiving an average pay increase of about $4,000 each, according to Michael Reich, a labor researcher and professor at UC Berkeley.

Still, this deal, unlike the ballot initiative, would allow businesses with less than 25 employees until 2023 to give workers a $15 hourly minimum wage. And although cities like Long Beach, Santa Monica and Pasadena have also passed $15 minimum wage increases, the majority of the state's cities have not followed suit.

Both Democratic presidential candidate have come out in a favor of a $15 minimum wage, although Hillary Clinton has resisted calling for a nationwide increase. Still, the federal minimum wage has remained at $7.25 an hour since 2009.