Paul Ryan is still a grifter: The GOP has become a tax-avoidance scam for the 1 percent 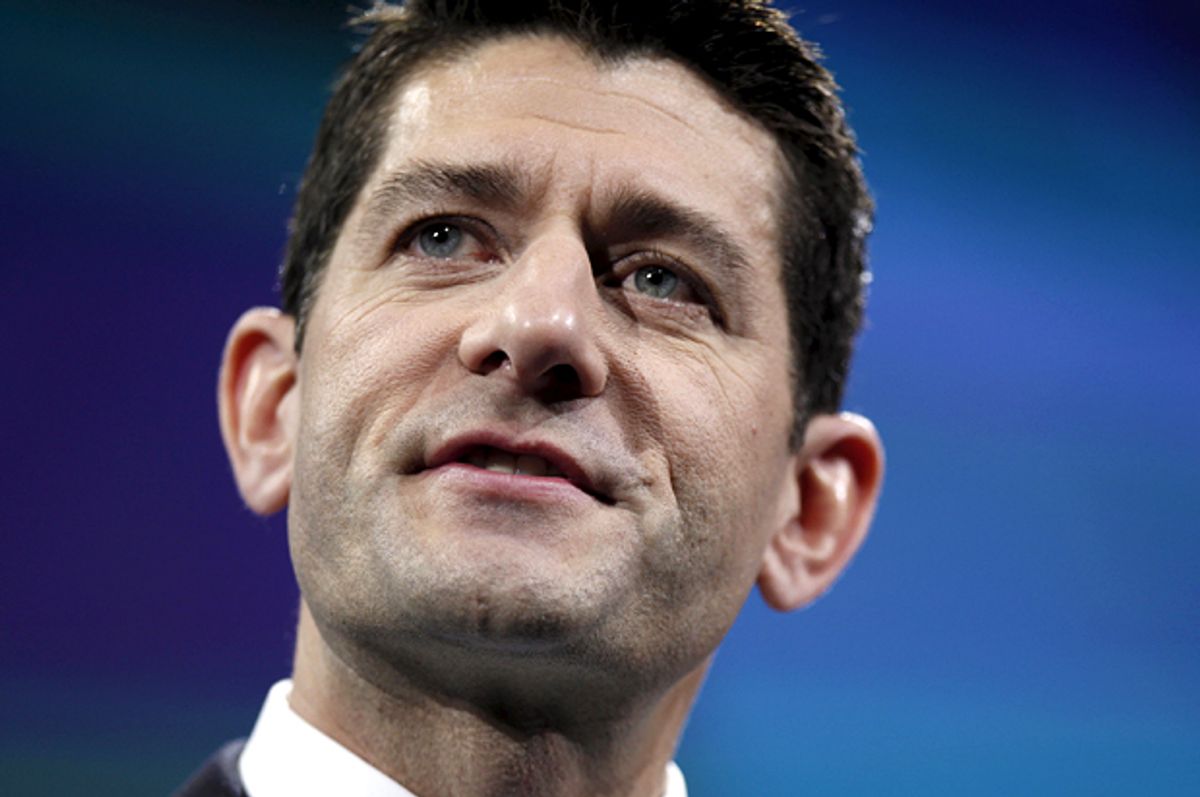 U.S. Speaker of the House Paul Ryan addresses the forum at the 2016 Kemp Forum on Expanding Opportunity in Columbia, South Carolina, January 9, 2016. The forum featured six presidential candidates and focused on their ideas for fighting poverty and expanding opportunity in America. REUTERS/Randall Hill - RTX21NIY (Reuters/Randall Hill)
--

The modern Republican Party has devolved into a tax avoidance scam for rich people. The scam is a masterpiece of psychological manipulation, in which the racial, cultural and economic anxieties of (mostly white) voters are exploited, in order to get those voters to support policies that transfer ever-greater percentages of wealth from themselves to the top 0.1 percent.

It really isn’t any more complicated than that. Everything else – the “culture wars,” the continual hysteria about terrorism, the non-stop rhetoric about how the mainstream media, the universities, the scientists, and basically the rest of the modern world are all biased against conservatives – it’s all just so much noise, designed to solve the tricky problem of how to get ordinary people to support economic policies that make them poorer and rich people richer.

You couldn’t come up with a better illustration of this principle than the ongoing GOP campaign to eliminate the estate tax. Last year the House voted to get rid of it, and a majority of Republican senators have pledged to do the same.

The Republican propaganda machine has waged a multi-decade war against the estate tax, which it has rebranded the “death tax.” Because of these efforts, the tax has been watered down to the point where, under current law, only a tiny group of wealthy people will ever pay any estate taxes at all.

But of course that isn’t enough, since it means that some taxes still have to be paid on truly enormous inheritances, and protecting the economic interests of people who have a net worth in the eight, nine, 10 or 11 figures is the contemporary GOP’s entire reason for being.

One would think that, in a democracy, an estate tax with a sky-high exemption would be extremely popular, since it only affects the very rich, and since taxing inherited (meaning unearned) wealth is surely the least objectionable sort of tax.

Yet a new Gallup poll finds that Americans support getting rid of the estate tax altogether by a margin of nearly 3-to-1. If this remarkable state of affairs leads to the repeal of the tax it will result in a nearly $30 billion annual tax break for the ultra-rich, much of which will go directly into the pockets of the GOP’s biggest donors.

The party’s PR apparatus has produced this result the old-fashioned way, by lying egregiously to the public. For example, in a letter last week to Senate Majority Leader Mitch McConnell, the Family Business Coalition claimed that "it makes no sense to require grieving families to pay a confiscatory tax on their loved one's lifetime savings. Often this tax is paid by selling family assets like farms and businesses."

“Often” here has a special, technical meaning, which in more ordinary discourse is represented by the phrase “almost never.” (Despite decades of claims along these lines, the family farm that had to be sold off because of the estate tax appears to be a completely mythical piece of propaganda.)

Besides lying about the estate tax’s actual effects, Republicans rely on two other widespread fallacies to convince people who will never pay any estate taxes that they ought to favor lessening the tax “burden” on idle trust funders, living off piles of inherited wealth.

One is captured by the statement, attributed to John Steinbeck, that in America “the poor see themselves not as an exploited proletariat, but as temporarily embarrassed millionaires.” In other words, optimism bias leads people to wildly overestimate the odds that someday they, too, will be in a position to bequeath vast sums to their families.

The other fallacy is even more basic and pernicious: contemporary Republican ideology is built around the idea – rarely stated outright, but implied by so many GOP policies– that taxes in general are simply immoral, and indeed a form of theft. The estate tax is wrong, according to this line of reasoning, because it’s wrong to “penalize” people for being rich, even if they got rich by inheriting somebody else’s money.

This preposterous notion is at the very core of the modern Republican Party, and its centrality is a prime example of how the GOP has become nothing more than a cleverly disguised grifting operation, run for the benefit of the rich.