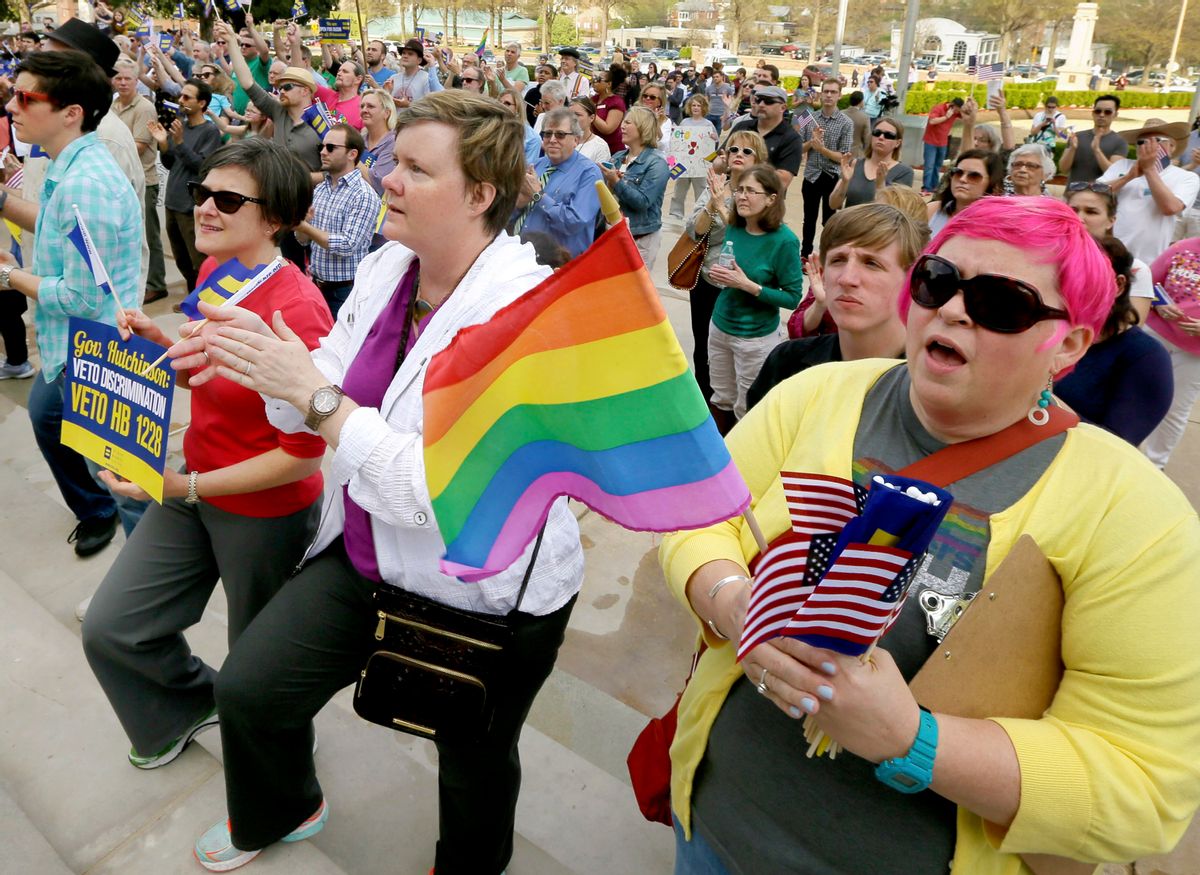 FILE - In this March 31, 2015 file photo, Barbara Hall, right, of Little Rock, joins others at a rally against a new religious objections law outside the Capitol in Little Rock, Ark. The national focus on whether new religious objections laws in Indiana and Arkansas could be used to discriminate against gays and lesbians has boosted efforts for broader civil rights law protections in those and other states. (AP Photo/Danny Johnston, File) (AP)
--

It was declared dead in the past, twice. Georgia's most contentious bill failed to receive final passage from the state legislature for the past two years and after finally being passed by a more conservative body of lawmakers earlier this month, the state's attempt to codify anti-LGBT discrimination now faces certain death at the hands of Georgia's Republican Governor Nathan Deal and his veto pen.

“I do not think we have to discriminate against anyone to protect the faith-based community in Georgia of which I and my family have been part of all of our lives,” Deal said on Monday, announcing his veto of HB 757. Otherwise known as “the Pastor Protection Act,” Georgia's most recent iteration of the popular conservative effort to expand the federal Religious Freedom and Restoration Act to the states in an effort to undercut same-sex marriage, allows clergy the right to refuse to perform same-sex weddings. And as in previous versions, the bill also gives faith-based organizations the right to refuse to rent facilities for events they find “objectionable” in addition to the right to hire and fire people who violate their “sincerely held religious beliefs.”

Of course, such a sweeping and broad power to discriminate was met with widespread criticism and backlash, meant to pressure the Republican governor to veto the controversial, but popular conservative measure. A long list of Hollywood celebrities, including Anne Hathaway and Julianne Moore, said they wouldn't work in the state unless the bill was vetoed. Studios like Disney and Marvel have threatened to stop film production in Georgia, while various other companies, including Apple, Dell, Time Warner, Comcast, Sony Pictures, Lions Gate, and Starz, all urged Deal to veto the anti-LGBT legislation. SalesForce CEO Mark Benioff, who has 16,000 employees in Georgia, threatened to pull them out of the state. Other local giants like Coca-Cola, Home Depot, and Delta Airlines all opposed the bill.

In the sports world, baseball's Atlanta Braves called the bill “detrimental to our community and bad for Georgia.” The Atlanta Hawks have come out against the measure and NFL Atlanta Falcons owner Arthur Blank warned the bill would have a “long-lasting negative impact on our state and the people of Georgia.” Even NFL commissioner Roger Goddell said Atlanta's hopes to host the Super Bowl in either 2019 or 2020 were in jeopardy if HB 757 were to be signed into law.

If all of this pressure outside of traditional political channels sounds familiar, it is because it's the same playbook followed by anti-discrimination activists after Indiana Republican Governor Mike Pence signed an anti-LGBT law under the guise of religious freedom back in 2015. More than 400 million #BoycottIndiana tweets in the week after bill passed and subsequent boycotts lead to the cancellation of at least 12 conventions and the lose of $60 million in direct business, according to local tourism officials estimates.

The Atlanta Convention and Visitors Bureau reported last week it heard from 15 companies that were considering pulling convention business out of Atlanta if HB 757 became law.

"Georgia is a welcoming state. It is full of loving, kind and generous people," the governor reminded the nation on Monday. "And that is what we should want.”

While Georgia may have dealt a major blow to conservatives forces hoping to use discrimination to fight against federally protected same-sex marriages, North Carolina took a major regressive step last week and outlawed municipalities from taking steps to protect LGBT citizens from discrimination -- a move challenged in a major lawsuit by the ACLU on Monday.