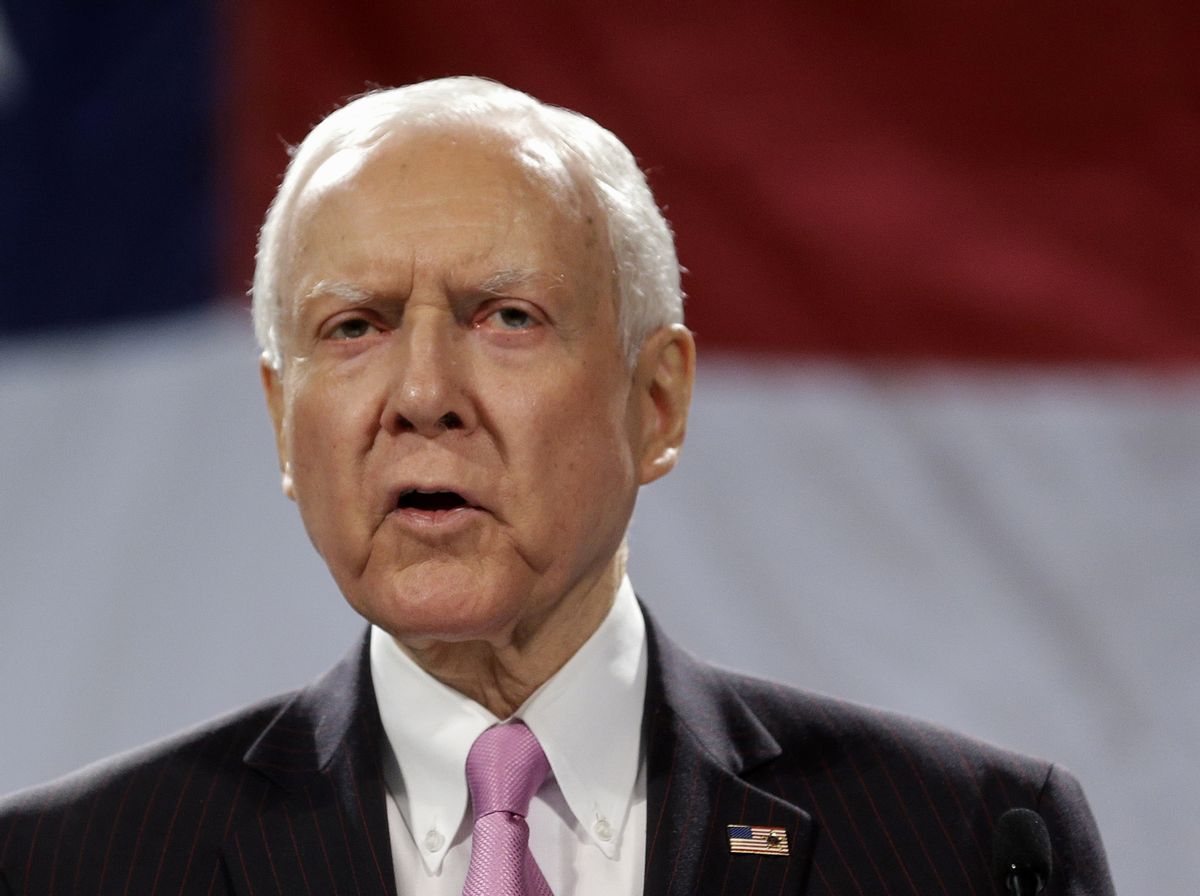 Utah senator Orrin Hatch has emerged as the point person for defending the Senate GOP’s strategy of blocking President Obama’s Supreme Court nominees, and in that role he’s grown adept at inventing new and increasingly exotic justifications for blanket obstructionism. Over the past few weeks, Hatch has explained that the Republican-controlled Senate can’t move forward on any nomination to replace the late Antonin Scalia because: there’s a “well-established rule” that “lame duck presidents” don’t get to make nominations, people are “going to get very, very upset” if a nomination is considered, and it wouldn’t be “fair to both sides.” Just last week he argued that Senate obstruction must proceed because protesters with “professionally printed signs” disrupted his fancy lunch meeting in Washington, DC.

In a Monday Op-Ed for The New York Times, Hatch tosses out yet another reason for delaying action on a Supreme Court nominee until after the 2016 election – let’s call it the Rock-Paper-Scissor principle of judicial nominations:

Given that the American people have elected a president and a Senate majority with drastically different views on the nature of legitimate constitutional government – a split decision of sorts – it seems appropriate to let 2016 voters decide which of the two very different paths the Supreme Court should take.

Voters sent Obama back to the White House in 2012 and then elected a Republican Senate majority in 2014, so 2016 will be the tie-breaker. Best two of out three! Winner gets to pick Scalia’s replacement.

This is some hot garbage and also a far more expansive justification for obstructionism than we’ve seen to date. First off, there’s the tendentious argument that the Republicans’ 2014 Senate victories carry the same mandate as the two national victories Obama won. Up to this point, the Republicans’ case for obstructing has generally just assumed that Obama’s national mandates didn’t matter, but now Hatch is trying to argue that they were actually canceled out by the 34 states that voted for senators on Election Day 2014. But even if you buy that argument, why does the product of divided government have to be a total shutdown of the nominating process? One could just as easily argue that outcome should be the selection of a “consensus nominee” – the precise term Orrin Hatch once used to describe current nominee Merrick Garland before he began discovering new reasons to oppose his nomination.

By relentlessly prioritizing the election that hasn’t happened yet, Hatch has embraced some poisonous logic that could be used to rationalize this sort of obstructionism at really any point of a presidency. Let’s say a high-court vacancy had occurred in February 2015 rather than February 2016. Republicans in the Senate would have been just about a month into their new majority, and under the reasoning laid out by Hatch in this Op-Ed, they’d be justified – they might even say obligated – to obstruct any and all nominees until the conclusion of the 2016 election. Hatch has presented a scenario in which divided government can be used as an excuse to, at a minimum, block all Supreme Court nominees in the second half of a presidential term.

And, of course, there’s no guarantee that the coming election will provide the sort of clarity that Hatch wants us to assume it will. It’s entirely possible that when all the votes are counted this November, a Democrat will have won the White House and the Republicans will have retained control of the Senate. Both sides would take it as an endorsement of their “drastically different views on the nature of legitimate constitutional government,” as Hatch puts it. The “split decision” would still be in effect, so what’s to stop Senate Republicans from arguing that it’s better to hold off on considering any nominees until 2020 so that we know for sure what voters really want?