California's $15 minimum wage is a really big deal. Here's what you need to know 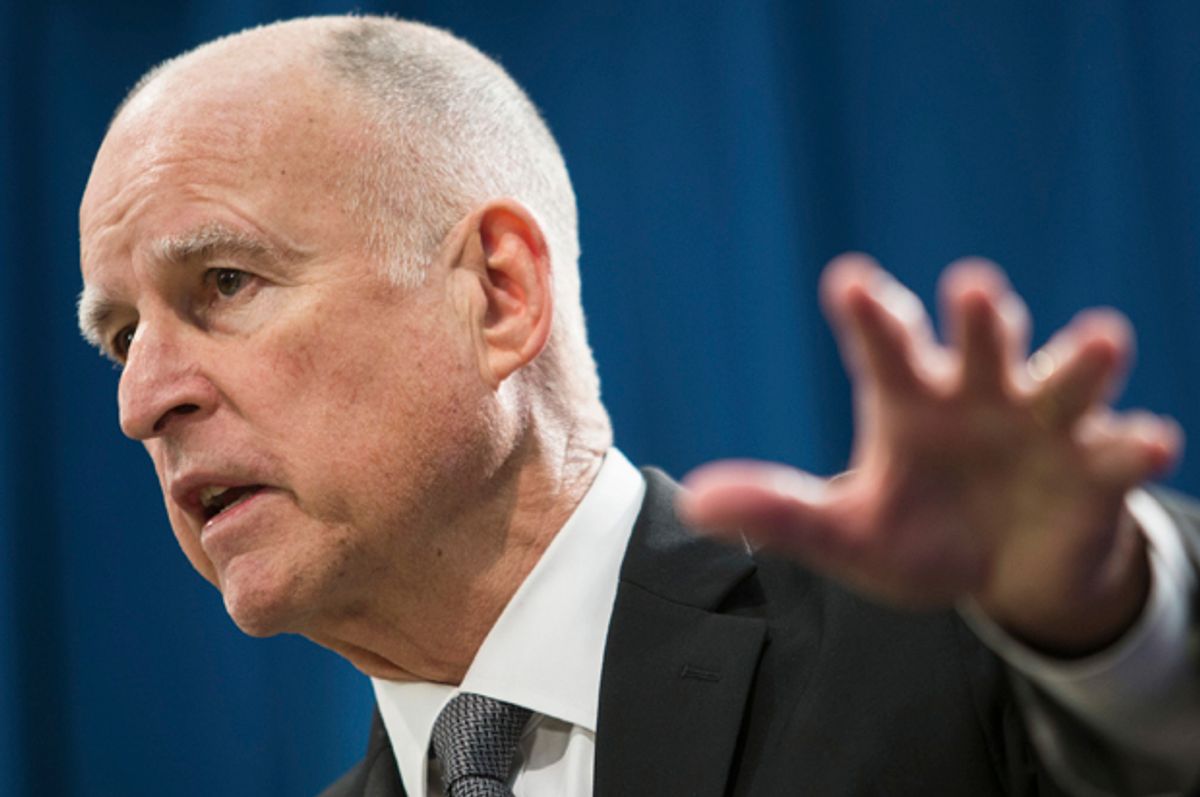 The biggest victory for working people in the 2016 election is on the verge of being realized without a vote being cast. California labor unions, the legislature, and Governor Jerry Brown are poised to consummate a deal that would raise the statewide minimum wage to $15 an hour by 2022, indexing it to inflation thereafter. Though several large California cities were already headed to the $15 threshold (and they can go further if they want, the statewide minimum is just a floor), this would be the first state to uniformly go that high.

Twelve percent of the national workforce resides in California, and roughly one in three workers would see a raise under the proposal. This would have been unthinkable just a few years ago, before the rise of the Fight for 15 movement. Now it’s being delivered, incredibly, as part of a compromise.

The deal, if finalized, avoids a looming disaster that would have spilled onto the November ballot. Two competing initiatives from factions of the same union, the Service Employees International Union (SEIU) State Council and its local affiliate United Healthcare Workers West (UHW), threatened to create ballot confusion and split resources, potentially dooming a long-sought raise for workers.

UHW already qualified their initiative for the ballot; SEIU State Council was gathering signatures for theirs. From the reporting so far, it’s clear that the State Council went around UHW and directly to the Governor. Labor’s pitch probably went like this: Raising the minimum wage is very popular in California. Once we settle our internal differences, we’ll pass our measure easily. You can join us and help shape what becomes law, or get left behind. Governor Brown, who had previously resisted the increase, obviously saw the logic in the pitch.

UHW didn’t specifically say they would defer to the deal and pull back their initiative, which they can by June under a new California law. The UHW measure would reach $15 an hour by 2021, so spending millions to accelerate the wage level by just one year seems foolish.

You can expect a lot of doomsayers warning how such a high minimum wage will lead to massive job loss and more harm for the working poor than help. It’s true that a $15 minimum will make California a national outlier. But it’s worth separating the facts from the hype.

First of all, most minimum wage studies do not find job-killing effects. Going to $15 an hour isn’t something contemplated by those studies. But the change will occur gradually. Under the deal, California’s minimum wage, currently at $10 an hour, will increase to $10.50 by 2017 and $11 by 2018. Then it would go up $1 every year until it gets to $15 by 2022. Small businesses with under 25 employees get another year to comply. Home healthcare workers would reportedly become eligible for three paid sick days a year too.

Assuming 2 percent inflation, $15 in 2022 is approximately equal to $13.30 today. But California’s not doing it in one leap. The gradual increase keeps the wage floor in line with what liberal economists believe would benefit the broad mass of workers. For example, the Economic Policy Institute endorsed raising the national minimum wage to $12 an hour by 2020, saying it would lift wages for 35 million workers. The California deal would get to $12 by 2019, meaning that the wage wouldn’t accelerate past the EPI benchmark for three years.

If that creates a strain -- like large layoffs for the 600,000 manufacturing workers that make under $15 an hour in the state currently -- California has plenty of time to recognize that. And Gov. Brown reportedly included a trigger that would allow the state to temporarily stop increases in the event of a recession.

Nothing in the California deal stops the existing wage hikes underway in Los Angeles, San Francisco and several other populous California regions. SEIU was already implementing a plan to get the entire Bay Area to $15 an hour. Add San Diego’s expected increase in June and a countywide increase in Santa Clara County (the heart of Silicon Valley) moving forward, and most of the places people actually live in California were already headed in that direction.

A statewide wage floor puts poorer areas like the Central Valley on the same level as the big cities, which could create problems. Oregon’s tiered minimum wage law, with a higher floor for Portland and lower levels elsewhere, tries to address that scenario. In several years, we’ll have real-world data on what works better, and states can adjust.

As for the notion that this will accelerate automation and drive out the low-wage workforce, ask the supermarket industry how it worked out when they tried to replace checkout clerks with machines. Spoiler: It didn’t. Retailers have dragged their feet for years upgrading cash registers to accept credit cards with a computer chip; expecting them to invest in millions of robots flies in the face of past experience. Plus, lower worker turnover that would accompany satisfaction with a living wage may reduce the ultimate cost to businesses.

On the other side of the ledger, millions of Californians will be lifted out of poverty. They will spend most of their new earnings, boosting economic activity. The state and federal government will enjoy more tax revenue that they can use to mitigate any deleterious effects. And there will be less strain on the existing safety net, because working people would have reduced needs for food stamps or Section 8 housing vouchers if they make a living wage.

That’s aside from rebalancing labor’s share of the national income, as workers get rewarded for their productivity. And if businesses try to increase productivity per worker to reduce their wage burden, that would have positive net effects across the economy, including the likely introduction of more businesses to serve a more prosperous state.

Central to all of this is the role of the labor movement, which organized a significant advance for all workers, not just those under a union contract. It could be labor’s biggest victory in decades. Fight for $15’s grassroots campaign powerfully displayed the need for a living wage, but SEIU and its counterparts saw the potential to deliver it, and used their resources and organizing talent to make it happen.

They of course had a stake – the Fight for $15 rallying cry is “$15 and a union,” which makes sense, because collective bargaining is as important a factor in wage growth as wage floors. You’re going to need labor to not only export the California solution elsewhere (this cannot help but influence existing talks in New York state), but to mitigate efforts by business to get around the law or carry it out at the expense of workers.

We’ve seen decades of labor experimentation that slighted workers – factory speed-ups, right to work states, just-in-time scheduling, the freelance economy, etc. Here’s one experiment that actually puts some power back in worker’s hands. We’ll need to monitor it, and make sure it’s achieving its goals. But everyone who helped engineer it deserves a round of applause.