"Can I press charges," Trump asked on Twitter after his campaign manager Corey Lewandowski was arrested for battery 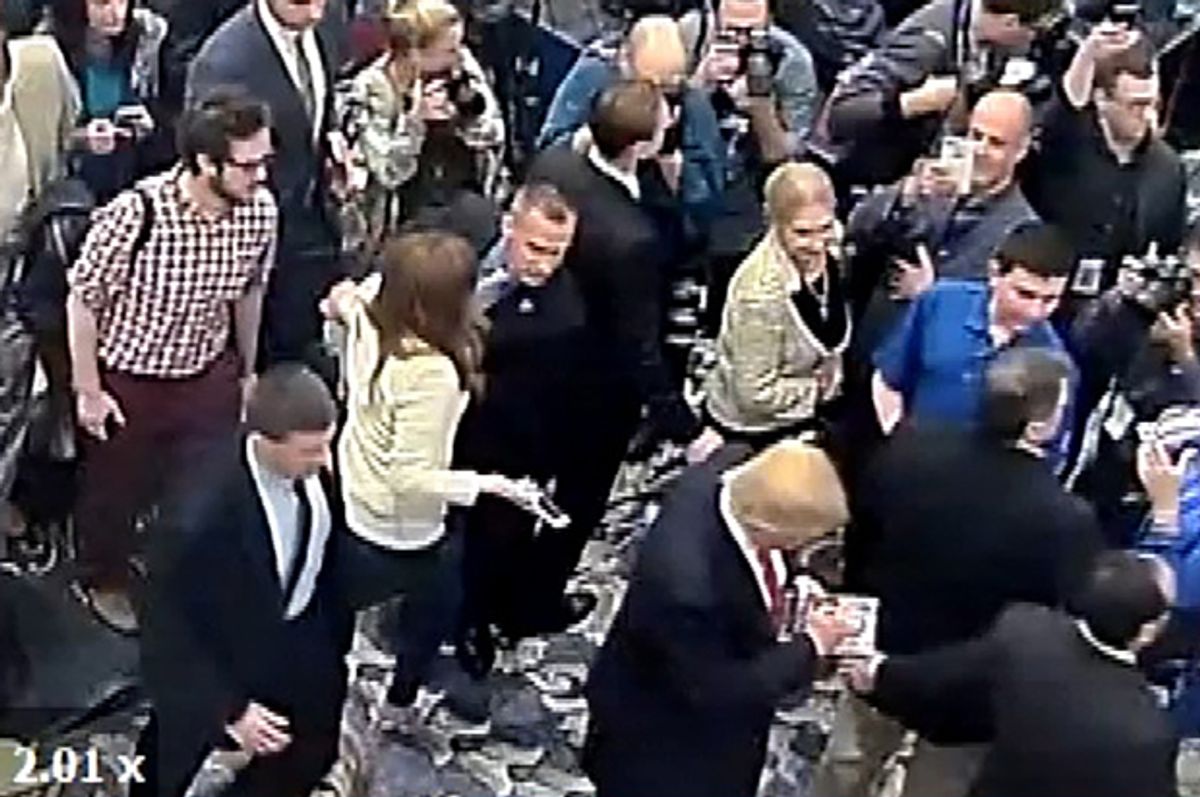 Corey Lewandowski is seen allegedly grabbing the arm of reporter Michelle Fields in this still frame from video taken March 8, 2016 and released by the Jupiter (Florida) Police Department March 29, 2016. (Reuters)
--

Donald Trump reacted to news of his campaign manager's arrest in Florida on battery charges Tuesday with his usual Twitter tantrum, lashing out to mock a former Breitbart staffer who filed a criminal compliant against Trump's top aide after he forcefully yanked her away from the Republican presidential frontrunner earlier this month.

"When she found out there was a tape from my facilitate, she changed her tune," Trump asserted on Twitter this afternoon, continuing his campaign's attacks on Michelle Fields, a reporter who very recently worked for the most pro-Trump media outlet in the nation:

Lewandowski, who soon after the March 8 incident took to Twitter to share bruises she alleged were left by Lewandowski, responded to Trump's charge, insisting that her "story never changed":

"Victory press conference was over. Why is she allowed to grab me and shout questions? Can I press charges?" Trump tweeted Tuesday with a screenshot of closed-circuit video from his Mar-a-Lago campaign the night of the incident. It does not appear that Fields is touching Trump in the image:

A second tweet featured an image that appears to show Fields' hand much closer to Trump. "What is in her hand??" Trump demands"

Lewandowksi, who was arrested in Florida early Tuesday morning will appear on Fox News' "O'Reilly Factor" Tuesday evening for an interview with guest host Eric Bolling. His boss, Trump, will also be interviewed on Fox News tonight by Sean Hannity. Rounding out the conservative family drama playing out on cable news' largest conservative outlet, Fields will appear, sandwiched between the two Trump campaign interviews, tonight with Megyn Kelly.

“We have total confidence in our campaign manager,” Trump national spokesperson Katrina Pierson said on CNN Tuesday, insisting that Lewandowski would remain on as campaign manager even if convicted of battery. “We feel that’s he’s going to be exonerated."

“Mr. Lewandowski is an integral part of the team and the camp wholeheartedly supports him and will see him through the entire ordeal.”