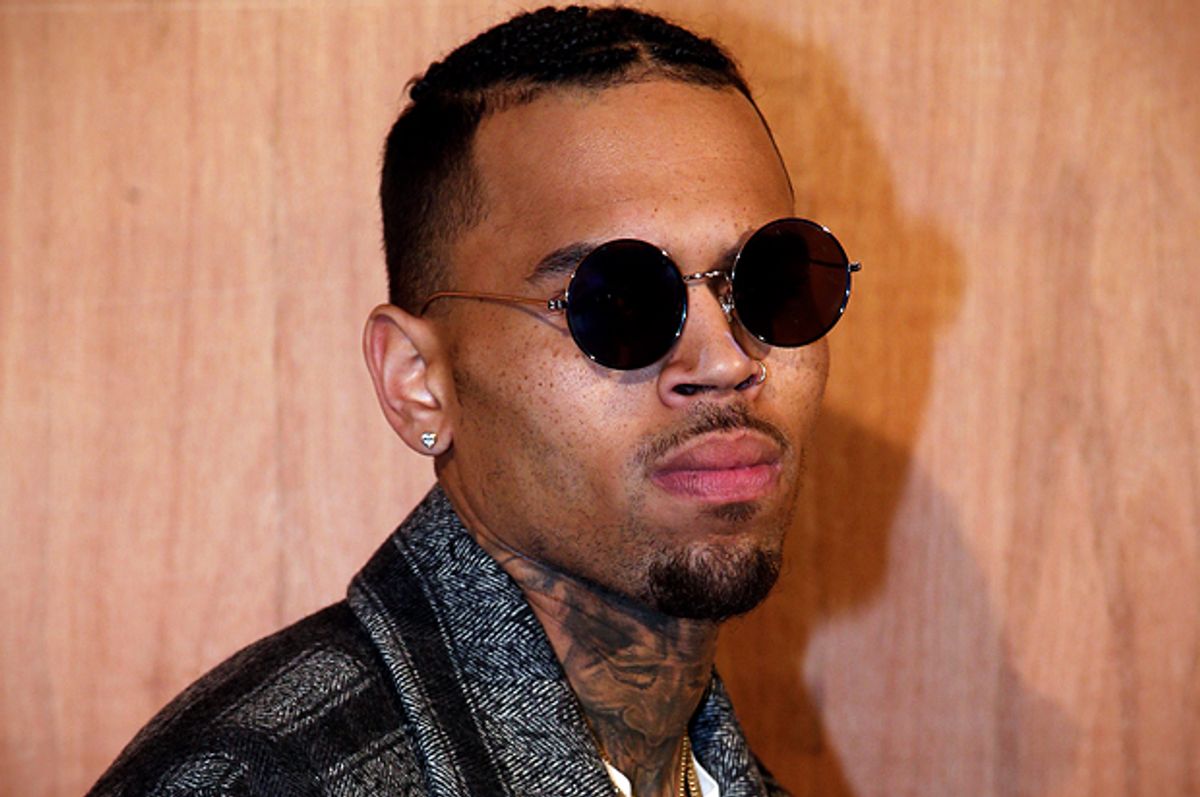 In case you'd forgotten that Chris Brown is the worst, here's an update: He still is.

On Monday, Grammy-nominated singer Kehlani Parrish posted a photo on Instagram of her arm, with an IV in it. She captioned it, "I wanted to leave this Earth. Being completely selfish for once. Never thought I'd get to such a low point." Friends reportedly found her unconscious in her Los Angeles home, following a highly-public storm of rumors she'd cheated on her boyfriend, NBA star Kyrie Irving, with an ex-boyfriend. TMZ, meanwhile, reported that she'd been put in psychiatric hold.

Earlier in the week, her ex, Canadian singer/songwriter and rapper PartyNextDoor, posted an undated photo on Instagram of them holding hands in bed, with the caption, "After all her shenanigans, still got the r&b singer back in my bed." He has since deleted it. In her message, Kehlani wrote, "Don't believe the blogs you read. No one was cheated on and I'm not a bad person. Everyone is hurt and everyone is in a place of misunderstanding, but as of today I had no single wish to see tomorrow ... but God saved me for a reason, and for that I must be grateful cuz I'm not in heaven right now for a reason." She later posted a photo of PND by her her hospital bed, with the caption,"thank you for saving my life." She subsequently removed all of her social media.

So perhaps she and Irving had broken up, perhaps it was an old picture, anyway, the point is, slut shaming is toxic. And the singer's high-profile friends have been offering their public support for her. Charlie Puth tweeted, "I'm very upset hearing this news about my friend right now. Social media is a terrible thing sometimes. I'm glad you are ok....People have no idea how much their words can affect people. What happened to treating everyone with kindness and understanding." And Nick Cannon, whom she refers to as a supportive father figure, posted a photo of the two of them in a hug, with the caption, "Had to go grab my Youngen!"

And then there's Brown. You remember Brown, the convicted abuser who has not done the greatest job of keeping his rage in check and his rap sheet free of arrests in the years since his notorious assault of then-girlfriend Rihanna. Now the father of a young daughter and a man who claims parenthood is "mellowing him out," he still seems to have a lot of anger. On Tuesday, he pointedly tweeted the observation that "Girls be mad at a n___a for f__king around wit bitches but her DMs got more names then the Declaration of Independence. #YEAHIMTHROWINGSHADE." Then, just to make it very clear, he added, "There is no attempting suicide. Stop flexing for the gram. Doing shit for sympathy so them comments under your pics don't look so bad." He then ended with "The amount of followers I got and the amount of comments are the amounts of f__ks I give" — which is peculiar, since that would mean he has quite a lot.

Brown's recent rant has all the hallmarks of one of his classic tantrums — nonsensical, mean, and then capped with a boastful flourish. And it's pretty amazing that people like Zendaya — who has spoken out against online trolls so forcefully in the past — continue to work with and support this guy. Just earlier this week, Wentworth Miller shared of his past suicidal depression and made an eloquent plea for compassion and sensitivity. Brown, on the other hand, just keeps on doing what he does — mocking, belittling and bullying — and staying as successful and famous for it as ever.