Trump’s petulant “Excuse me”: Two little words that signal he's about to lay it on thick

On last night's Town Hall, he said it 14 times, notably before insisting he "didn't start" the Heidi Cruz smear 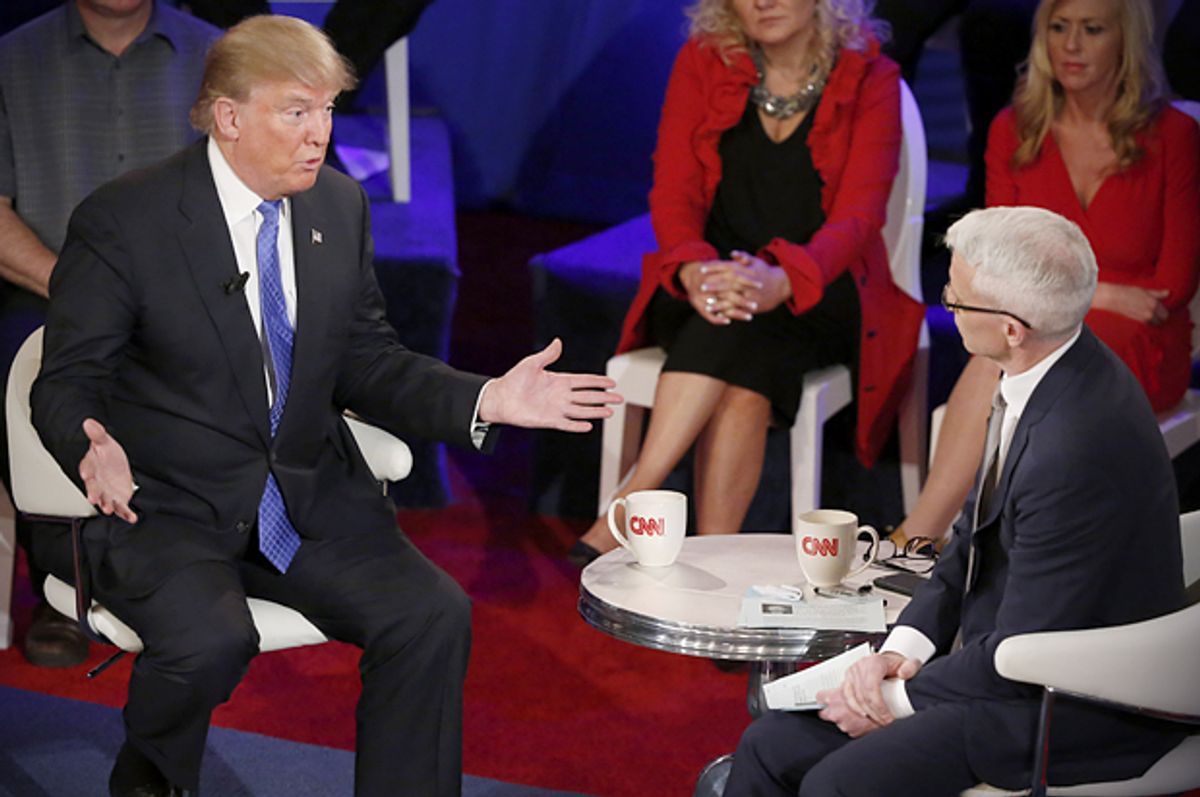 Last night at the CNN Republican presidential candidates’ Town Hall in Milwaukee, moderator Anderson Cooper scolded GOP frontrunner Donald Trump, because like so many responsible adults in similar situations, the cranky toddler did not give him any choice. Cooper began the conversation by trying to pin Trump down on his tweets attacking Senator Ted Cruz for attacking Melania Trump by then attacking Heidi Cruz—or, to be more exact, Heidi Cruz’s appearance.

Via CNN’s rush transcript of the town hall:

COOPER: […] After saying that you were going to spill the beans about Heidi Cruz, you retweeted an unflattering picture of her next to a picture of your wife.

TRUMP:  I thought it was fine.  She's a pretty woman.

COOPER:  You're running for president of the United States.

COOPER:  But, sir, with all due respect, that's the argument of 5-year-old.

COOPER:  The argument of a 5-year-old is he started it.

TRUMP:  You would say that.  That's the problem with our country.

COOPER:  Every parent knows a kid who says he started it.

TRUMP:  That's not a 5-year-old. Excuse.  No, no, no.  That's the problem.  Exactly that thinking is the problem this country has.  I did not start this.

The only thing that would have made this more like a scene right outside daycare on a Tuesday afternoon is if Trump had thrown down one of his shoes in frustration and Cooper, ever-disappointed, took his glasses off and pinched the bridge of his nose.

Cooper’s appeal to responsibility and maturity is commendable, as usual, but in this case, not only does the toddler not want to grow up, but the toddler is getting massive countrywide endorsement for his immaturity; Trump’s basic strategy, in this campaign and in life, is to evade responsibility and blame others while utilizing as much bluster as possible. It’s apparent in even just his mendacity about the much-discussed retweet that could functionally only be commenting on Heidi Cruz’s appearance—what else could “THE IMAGES ARE WORTH A THOUSAND WORDS” be referring to? That they are both wearing diamond studs? Or is it the direction they are looking? Did Donald Trump retweet the account “@Don_Vito_08” because of the terrible revelation that Heidi Cruz isn’t an ambiturner?!

No, of course not. The comment was about her appearance and everyone knows it; Trump is enough of a machismo-obsessed cretin that he thinks there is such a thing as objective hotness for women, and furthermore, that it matters. But he lies about it, to Cooper; he says “it was a nice picture,” “it was fine,” and even, as if this matters, “she’s a pretty woman.” Cooper, as he does, appeals to reason, with a sharp little “Come on.” And Trump, more or less cornered into either admitting he purposefully retweeted comments about the attractiveness of his opponent’s wife or that he has some other “beans” on Heidi Cruz to spill, resorts to the final bastion of the petulant bully: “Excuse me. I didn’t start it.”

Given that Cooper said everything that needs to be said about “I didn’t start it,” what fascinates me is the “excuse me,” a verbal tic that pops up throughout Trump’s rhetoric. What does that “excuse me” really mean? It is not the “excuse me” one intones after sneezing loudly, or burping at the dinner table, which is too bad, because it would be nice if Trump would beg our pardons following some of the more inflammatory things he’s said.

I noticed it later on at the Town Hall, Trump was asked to answer for his proposed ban on Muslims, by Brian Lenda, a first-responding officer who was shot 15 times in an attempt to stop an attack on a Sikh temple in Oak Creek, Wisconsin. Lenda asked Trump about racial profiling, and Trump’s response was that the issues around terrorism were too dangerous to be worried about that. “I do want to [protect the rights of minority groups], but at the same time we have to recognize we have a serious problem […] You know, nobody wants to call it a war—excuse me. Nobody wants to call it a war. It's a war. There's a war.”

Is it, though? CNN’s transcript has Trump saying “excuse me” 14 times, sometimes in quick succession. Partly, he uses it as a wedge to interrupt Cooper—sort of like an “I’m sorry, but…” or Fox News anchor Megyn Kelly’s “stand by.” Partly, he uses it to insert his ego into the conversation—look at me, pay attention to me, excuse you, but now I’m talking. But mostly, I think, it’s his tell that he is about to twist the truth. Or to be more exact, to use an element of truth to package a much bigger lie. It’s an “excuse me” of false equivalence, one that says, well, because I didn’t start it, it was okay that I tweeted something that mocked my opponent’s wife’s appearance.

From last night’s town hall: “Excuse me, I didn’t start it,” about the wife-feud of 2016. “Excuse me, they were Romney people,” about the Melania Trump ad run by an anti-Trump super PAC. “Excuse me, they had bombs on the floor, many people saw this” in reference to the San Bernadino murderers in the Muslim community. “Excuse me, I didn’t suggest!” to Cooper, about how a tweet is, apparently, not a suggestion. “Excuse me. Did you see the protester grabbing the woman in front of him? With his hands on her neck?” as an evasion about his campaign manager Corey Lewandowski’s filmed and documented assault of Michelle Fields, a Breitbart reporter. It is a litany of insular truth and fabrication. But to a certain subset of the viewing public, it looks like Trump is one-upping his competition.

To the rest of us, it looks like a tantrum. At this rate, I would not be that surprised to see Cooper inform Trump at their next meeting that no, he is not excused. I wonder how Trump will wheedle his way out of that.

Watch this video to see just how many times Trump interrupted Cooper with an "excuse me."