Trump's proposal to criminalize abortion mirrors the Republican Party platform. The media should know that 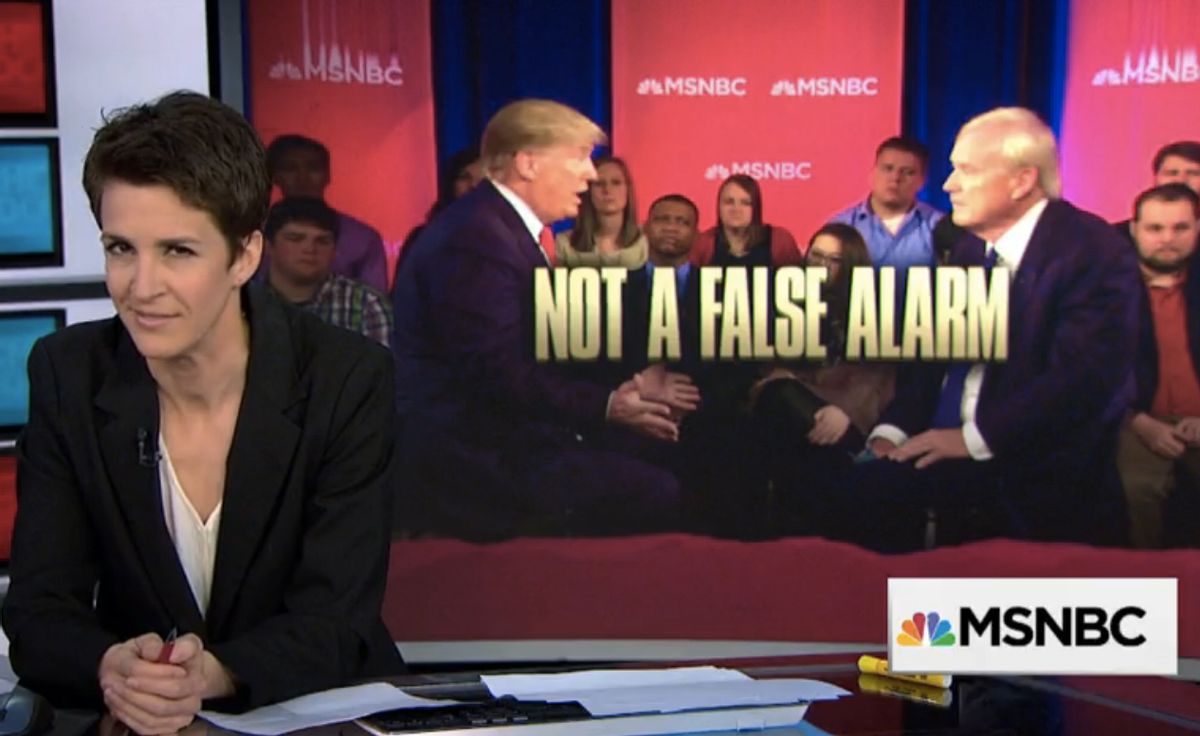 Fair warning: The clip below is 20 minutes long -- and completely worth it.

To open her show Thursday night, MSNBC host Rachel Maddow employed her usual meticulous rundown of a topic's most unusual history to arrive at a salient and current point. It resulted in a brilliant and glorious takedown of the Republican Party's disingenuous anti-abortion extremeness disguised as moderation, and the media which for so long played along with the charade until the current Republican presidential frontrunner inadvertently let the whole thing slip.

The official Republican Party platform, passed at the 2012 Republican National Convention, is very clear on abortion, calling for the passage of a “Human Life Amendment” to the Constitution, which would classify every fetus at every stage as a full, human, life. The Amendment would effectively nullify Roe v. Wade and outlaw abortion in all cases, including rape or incest. This official Republican Party platform also calls for any doctor who performs the procedure to be arrested.

But what about the woman seeking the abortion? How can a doctor perform such a medical procedure without consent? Wouldn't that necessitate that women, and possibly their partners, be considered part of a criminal conspiracy to commit murder?

These are questions that heretofore had been either completely ignored or given short shrift by media covering anti-choice Republicans for years. Perhaps because the logical conclusion of the Republican Party's extreme anti-abortion platform would reveal it to be just that, wholly extreme.

“I don’t know if the Beltway media sort of doesn’t get this yet, or if they don’t feel like reporting on it or if it’s uncomfortable, or if it earns you too many enemies from people you want to be sources or friends in the future,” Maddow said on Thursday, explaining that while Donald Trump caused a sudden national controversy by simply espousing the logical conclusion of the Republican Party's official anti-abortion platform during a town hall with MSNBC's Chris Matthews on Wednesday, his rival Ted Cruz routinely touts a top supporter, Troy Newman, who is a vocal anti-abortion activist who calls for the execution of abortion providers.

"What's going on is not that hard to understand, and it's really different from the way this is being described this most national media," Maddow said, calling out the pattern of media allowing Republicans a pass on their extremism as a whole, while focusing on the insanity of an individual. "The political narrative and media narrative that come up in the last 24 hours in response to what Donald Trump said yesterday about abortion and what it means to be anti- abortion, what it means to want to ban abortion in this country, it is so out of touch and so facile right now it's mind-bending." A sampling of some of the coverage Maddow referred to:

"What Donald Trump did yesterday, it may be viewed as a gaffe, but it wasn't a gaffe, right? He just used blunter language than the anti-abortion movement likes the use in public," she explained. “Ted Cruz is right, that the anti-abortion movement in general has learned to stop talking about that,” she said. “They don’t like to talk about that; they like to say that they’ll never talk about that. But it is, if we’re being honest here, an unavoidable consequence of what it would mean if they get their way":

Ted Cruz is not only anti-abortion, he's anti-abortion in every instance. Under President Ted Cruz, he would go further than Donald Trump and impose the same criminal regime not just on women broadly, but on specifically women who became pregnant because they were raped or because they were the victim of incest.

So, some -- God forbid, right, some 13-year-old girl somewhere in America gets raped by her evil uncle and gets impregnated. Under a Ted Cruz presidency, if he gets his way, that 13-year-old girl's pregnancy would become a matter for the state, the government to monitor, and the criminal law would be used to force the 13-year-old girl to bring the pregnancy to term and it would force her to give birth to her rapist's child against her will under penalty of criminal law.

So, it sort of feels like a parallel universe, right, in which the comments by Donald Trump yesterday are seen as somehow outrageous while Ted Cruz is the reasonable one.

Take a moment, or 20, to watch the entire thing, via MSNBC: