"What other option does a person like me have," California Senate candidate Mike Beitiks asks 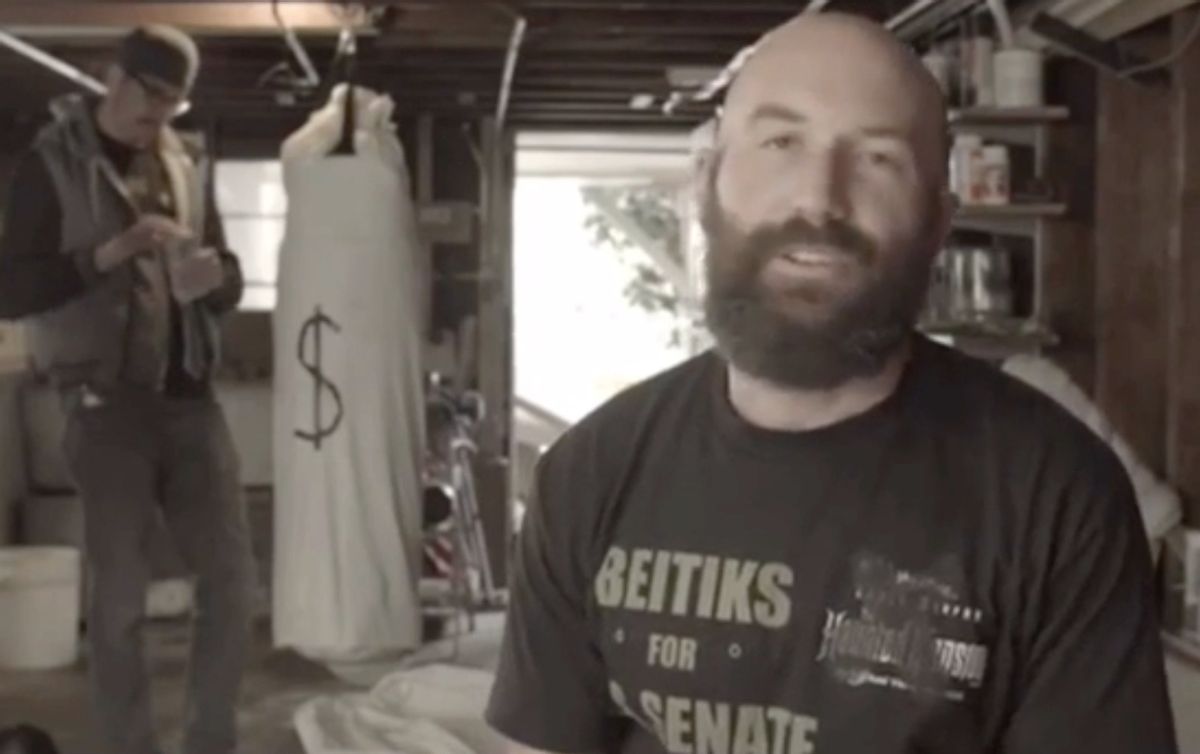 Silly season of political campaign ads has hardly begun, but I have a feeling we already have a top contender that will outlast the crazy to come.

A single-issue upstart candidate for U.S. Senate in California has just released a hilarious campaign ad promising to "literally fistfight the Koch Brothers" in order to get money out of politics and effectively fight climate change.

“ISIS. Obamacare. Russia. The NSA. Wealth disparity. Immigration reform. Gun control. What do all of these hot issues for the 2016 election have in common?" 32-year-old father of two, lawyer and surfer Mike Beitiks asks on his campaign website. "None of them matter because we’re all going to die.”

While Beitiks makes no promises to create jobs -- “Everyone I know hates their jobs,” he told MSNBC last year, adding “jobs create a lot of CO2" -- he does promise to "not to do nothing" about climate change.

On his website, iwillnotdonothing.org, Beitiks says he is "ready to risk assassination attempts from corporate henchmen, misguided populists, shortsighted libertarians, cult leaders, and lobbyists of every industry modern society was built upon as I implement wildly unpopular policies" in order to act on climate change.

And in a new campaign ad, the San Franciscan doesn't take on his Democratic primary challengers like Attorney General Kamala Harris and Rep. Loretta Sanchez, but two 75-year-old and 80-year-old brothers -- the Koch brothers.

“There’s a lot of candidates who talk about fighting money in politics, but there’s only one who is training right now to literally fistfight the Koch brothers,” says a man, not Beitiks, who appears to be Beitiks' boxing trainer in the comedic campaign ad. "Talk is cheap. David and Charles Koch, why don't you put your money where your mouth is and then Mike Beitiks will put his fist where your money is."

The trainer, Matt Lieb, also show off a dollar sign adorned punching bag that he explains is full of Ayn Rand novels. “There’s a couple different levels of free-market economics in that bad boy.”

“This is strictly a gentleman’s challenge. A possible solution for this little ‘federal-legislators-are-doing-nothing-to-protect-my-children-from-climate-change-in-large-part-because-of-you-and-your-money’ kerfuffle that’s come up between us," Beitiks explains in a press release.

Lieb, the trainer, lays out the ground rules for the impending Koch fistfight and reminds Beitiks that “When the day comes and we see both those dudes, cause they hang out together, we got to be ready to pounce.”

The Kochs, Lieb says, are not allowed to pay others to fight for them. “It’s a very important rule because we’ve trained to fight two senior citizens,” Lieb insists.

The candidate later admits that fighting the billionaire brothers is most "definitely not" a good idea, before asking this most important question: “But you’re talking about a huge obstacle to effective climate legislation on the federal level. What other option does a person like me have?”

The two-and-a-half-minute ad even ends with a humorous touch: “Paid for by Beatikis’ money that could have gone to carbon reduction.”