Donald Trump's cratering popularity could help Ted Cruz snag the nomination, but he has glaring weaknesses too 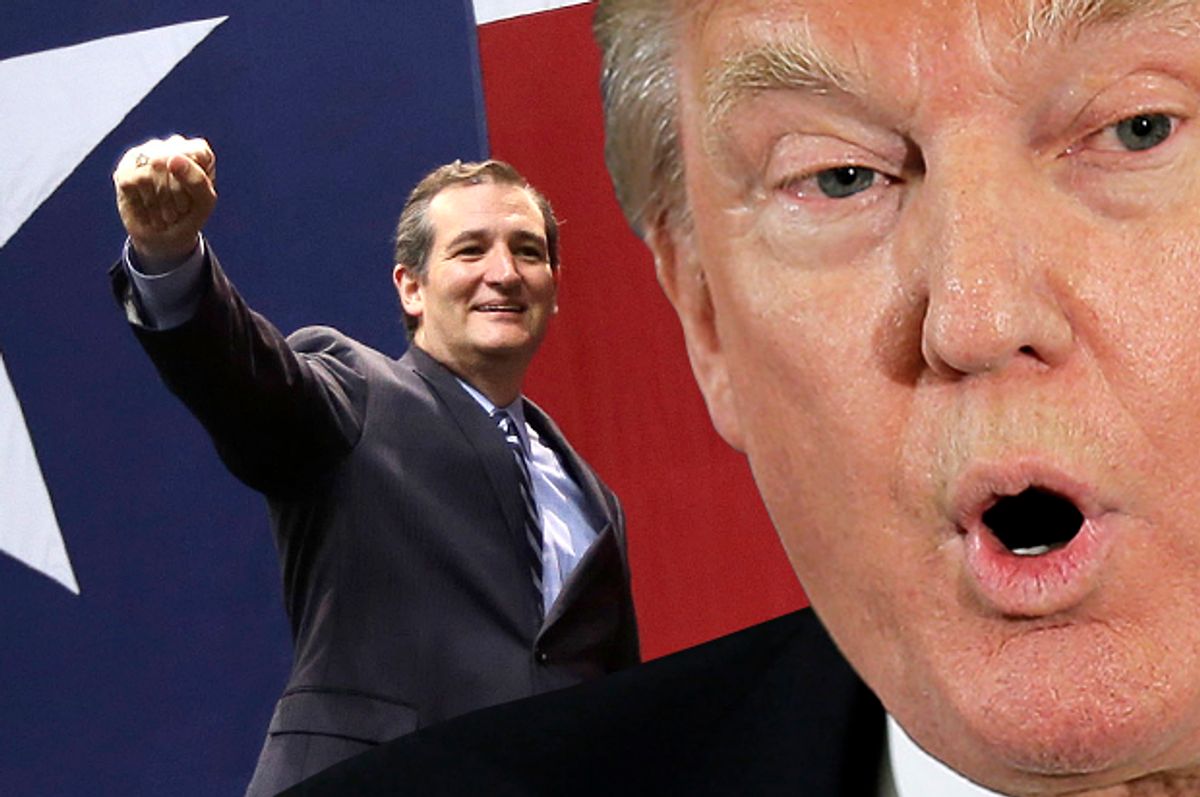 It seems like it wouldn’t be possible, but Donald Trump is somehow getting more unpopular. He was never well-liked to begin with, but after a series of rough news cycles dominated by, among other things, his campaign manager being brought up on misdemeanor battery charges, he’s staring at historic levels of unpopularity for a presidential candidate. New polling from the Washington Post puts Trump’s unfavorable rating at a staggeringly high 67 percent. He’s disliked by pretty much every demographic slice of the population, and is especially unpopular among white women and Hispanics. The political toxicity of the Trump brand has graduated from merely strychnine to something like polonium-210.

Trump’s standing with Republican primary voters remains steady, but as my colleague Sean Illing writes, numbers like these point to a general election bloodbath come November. Putting someone as broadly reviled as Donald Trump at the top of the ticket would almost certainly cost Republicans the White House, quite likely tip control of the Senate to the Democrats, and possibly threaten the GOP’s majority in the House of Representatives. And when you consider the current vacancy on the Supreme Court and the likelihood of others coming open during the next president’s term, you’re looking at a comprehensive, years-long setback for Republican politics, all thanks to Trump.

One question that arises from Trump’s terrible numbers is whether they make Ted Cruz’s chances of capturing the nomination any stronger. Cruz won’t be able to capture the required number of delegates before the convention to win the nomination outright, but he can stop Trump from getting there too. And then it’s BROKERED CONVENTION TIME! Party leaders would obviously be hesitant to jigger the convention to block Trump – the likely vote- and delegate-leader – from capturing the nomination, but if goes into the convention with close to three-quarters of the American public disliking him, GOP bigwigs might conclude that political self-preservation requires gaming the outcome in defiance of the will of the voters. In that scenario Cruz would have a strong hand, given that the convention is run by party insiders and he is (ironically) the Republican establishment’s preferred alternative to Trump. (Also, Trump and his team don’t seem to have a firm grasp of how the delegate system works.)

So let’s say the nomination is snatched away from Trump at the convention and thrown to Cruz. Crisis averted, right? Well… no, not really. Cruz might not be as weak a general election candidate as Trump, but he has his own glaring weaknesses that would make a November victory an arduous slog for the Republican Party.

While everyone is focusing on the collapse of Trump’s popularity, no one has really noticed that Cruz’s numbers are plummeting too. The same Washington Post poll that gave Trump crazily high negatives also found that Cruz is deeply underwater. His favorable rating is just 35 percent, while his unfavorable rating is 51 percent. Back in January, his favorable/unfavorable was roughly even at 42/43. A new poll from Gallup confirmed the Post poll’s findings: in December of last year, Cruz’s favorable/unfavorable split was about even, but it’s cratered to -16 since then. “Cruz's image has suffered as much as Trump's,” Gallup’s analysis notes.

This makes all the sense in the world. To stay competitive with Trump in the Republican primary, Cruz has had to get down in the mud with him and engage in some extraordinarily personal and petty fights. And Cruz’s overall response to Trumpism hasn’t been to reject it, but to embrace it. He spouts the same anti-immigrant nonsense as Trump, just without the flourishes and exaggerations about massive walls. (According to recent polling, Cruz is as unpopular with Latino voters as Mitt Romney was in 2012.) He plays the same politics of xenophobia and anxiety as Trump – after the Brussels attacks he proposed empowering police forces to patrol and monitor Muslim communities in America.

Cruz would also be the most ideologically extreme presidential candidate we’ve seen for some time. His entire political persona is built around a zero-compromise approach to far-right conservative politics, and his general election game plan is to win by mobilizing conservative voters who allegedly “stayed home” in 2012 – a dubious theory that isn’t supported by any strong evidence. That extremism hasn’t won him any policy victories he can point do, but it did inform his successful push to shut down the government over Obamacare, and his unsuccessful push to shut down the government over Planned Parenthood funding.

And Cruz doesn’t have much in the way of personal likeability to paper over his ideological extremism. He struggles to conceal his smug know-it-all-ism, and his idea of charm is to quote the Federalist Papers. Rep. Peter King, Republican of New York, summed up Cruz neatly in a quote to the Washington Post: “Cruz isn't a good guy, and he'd be impossible as president. People don't trust him. And regardless of what your concern is with Trump, he's pragmatic enough to get something done. I also don't see malice in Trump like I see with Cruz.”

Cruz would be a stronger candidate than Trump, but that bar is so low that it has a few inches of topsoil over it. If he were to snag the nomination and there were no exogenous shocks to tilt the election away from the incumbent party (like an economic collapse or a massive terrorist attack), it seems like he would have a rough time capturing the presidency. But a Cruz nomination could at least help the Republicans prevent a complete or partial Democratic takeover of Congress, which might be the best outcome they could hope for.