Donald Trump is the pinnacle of American stupidity: Why his campaign consummates decades of rising anti-intellectualism

It's not that we've never seen anyone like Trump before. He's just finishing the job begun by Reagan, Bush & Palin 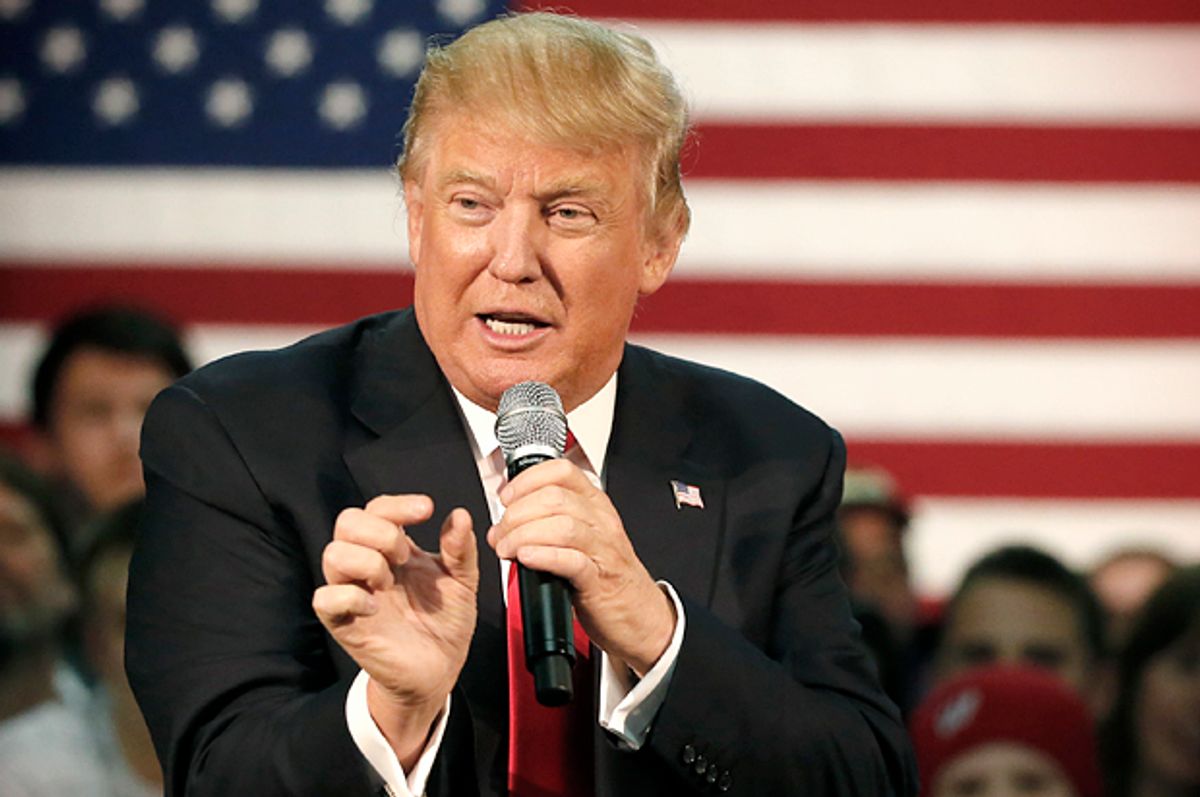 During Tuesday’s Republican town hall in Milwaukee, it was not a candidate, but the host, Anderson Cooper, who had the best line of the night, when he told Donald Trump — in the politest way possible — that he was acting like a fatuous little boy. “Sir, with all due respect, that’s the argument of a 5-year-old,” said the CNN anchor, after Trump defended his attack on Ted Cruz’s wife by saying that he “didn’t start it,” in just the same manner a child who is unable to admit any wrongdoing (or someone with narcissistic personality disorder) might.

Of course, while the Donald is nearly 70 years old, and his stout physique and leathery skin display what several decades of gravity, tanning booths and well-done steaks can accomplish, his temperament has remained fixed somewhere in the adolescent period of development. The billionaire has thrived off of petty insults, having defended the size of his junk (admittedly, he’s not the only grown man who feels the need to do this, but the only presidential candidate); threatened to “beat the crap out of” protesters; and, most recently, tweeted an unflattering picture of his opponent’s wife next to his supermodel trophy wife. Trump also speaks at a 4th-grade level — by far the lowest of all presidential candidates — and has offered almost nothing in terms of actual policy, just bravado about his superhuman deal-making abilities.

Trump represents the culmination of Republican — and American — stupidity. For many voters, his ignorance of both foreign and domestic issues is offset by his bold and folksy rhetoric, along with his absolute confidence, which, as Bill Maher recently noted, “is perfect for the country that scores low in math and science but off the charts in self-esteem.” In this age of 24/7 entertainment, where even the news is seen as a form of escapism, his sophomoric antics are considered fun and amusing, while his vulgar and often inflammatory comments are regarded as rebellious by those who are fed up with perceived “political correctness.”

Trump, of course, didn’t invent the politics of simplemindedness. Republican patron saint Ronald Reagan was incredibly ill-informed and even hostile toward learnedness, but he was an actor who could pull off inspiring speeches with a kind of paternal charm. The same cannot be said for our last president, George W. Bush, whom Rolling Stone writer Matt Taibbi accredits with paving the way for Trump’s know-nothing triumph in his article "Revenge of the Simple." Famous for his inability to string together coherent sentences, Bush was not especially proficient at hiding his deficits. But it didn’t matter; his simplicity was part of his charm, particularly when up against the sophisticated and pompous Vice President Al Gore. Ultimately, it came down to the question of which man a large swath of the population would rather have a beer with.

In his piece, Taibbi recounts how Bush strategist Karl Rove sold the president's simplicity to the American voters:

“Rove correctly guessed that a generation of watching TV and Hollywood movies left huge blocs of Americans convinced that people who read books, looked at paintings and cared about spelling were either serial killers or scheming to steal bearer bonds from the Nakatomi building. (Even knowing what a bearer bond is was villainous)... The Roves of the world used Bush's simplicity to win the White House. Once they got there, they used the levers of power to pillage and scheme like every other gang of rapacious politicians ever. But the plan was never to make ignorance a political principle. It was just a ruse to win office.”

After eight years of Bush, it was hard to imagine a less intelligent or articulate Republican on a presidential ticket. And then Senator John McCain, R - Ariz., decided to tap Sarah Palin — who made Bush look like Stephen Hawking — as his running mate. Her inability to answer basic questions evinced a frightening lack of knowledge and judgement in someone who might have been a heartbeat away from the presidency. But once again, this was part of her appeal. Later on, McCain staffers revealed that her ignorance was even worse than it looked, as portrayed in the HBO movie “Game Change.” In the film, Palin thought the Queen ran the British government, didn't know the difference between North and South Korea, thought Saddam Hussein was responsible for 9/11, and had never heard of the Federal Reserve.

Since 2008, ignorance has increasingly become a political principle in Republican circles, as Taibbi puts it. After Obama defeated McCain and Palin, the reactionary Tea Party movement arose, and anti-intellectualism and extremism began to infiltrate the GOP. (While the Republican establishment has long exploited the ignorance of voters, it managed to keep the more reactionary figures in line, until recently.) Leading Tea Party Republicans like Michele Bachmann, Ben Carson, Scott Walker, Mike Huckabee, Rick Perry, and of course, Donald Trump, have found tremendous success in being about as unsophisticated and uninformed as possible.

And now here we are in 2016. After 10 months on the campaign trail, Trump seems in no rush to become more knowledgeable on the issues -- or more “presidential,” for that matter. And why should he be? So far, he’s managed to prove all the pundits wrong and win state after state on a giant heap of blustering bullshit. Trump’s recent interviews on foreign policy with The Washington Post and The New York Times reveal just how deluded he is, and major media outlets are now expressing deep concern. “Mr. Trump is confronting most of these issues for the first time, and many of his thoughts are contradictory and shockingly ignorant,” writes the New York Times editorial board. Unfortunately, ignorance is no longer seen as a negative to many voters, but a sincere sign of authenticity.