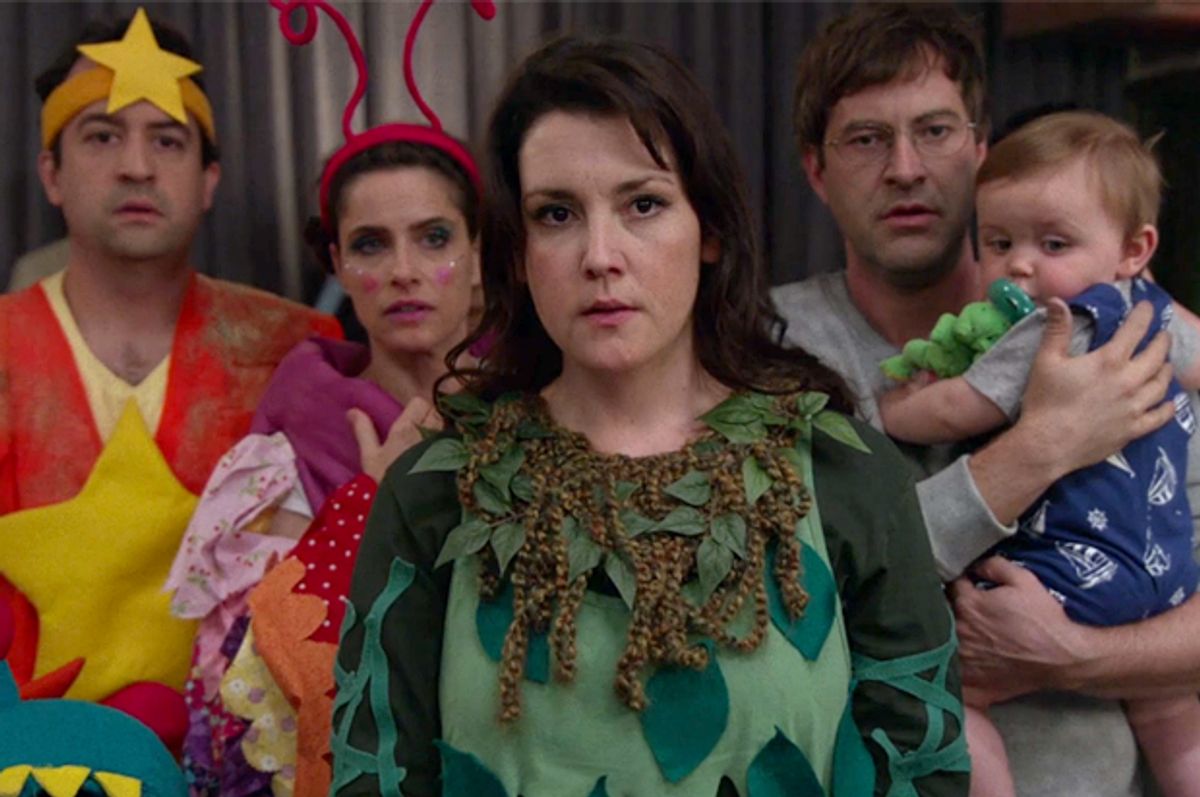 Last year, in advance of “Togetherness”’ lovely season one finale, a person who knows a lot more about Los Angeles school districts than I do wrote a piece here in Salon about how completely broken the show’s perspective on charter schools is. Joshua Leibner, a former LAUSD teacher, eloquently explains the hypocrisies of the show’s approach to children’s education. As a result, he explains, he is pretty fed up with the show by the end of the first season.

I wasn't there—yet. Ostensibly in the name of character arcs and the willing suspension of disbelief—and more because of how beautiful that closing scene was—I gave the show a pass. I was enamored enough of the characters that creators Mark and Jay Duplass showcased in “Togetherness” that I was willing to chalk up Michelle (Melanie Lynskey)’s sudden transformation into a charter-school organizer as part of her own internal transformation from a dissatisfied stay-at-home mom to a woman with her own voice and her own ideas.

In the show's defense, Michelle’s decision to throw in her lot with the charter school being put together in her community is much more about her burgeoning crush on its organizer, David Garcia (John Ortiz), and her desire to do something different from what her husband Brett (Mark Duplass) has already decided on, than it is about the political realities of their neighborhood in Los Angeles (gentrifying Eagle Rock, where the Duplass brothers live in real life). Narrative can’t divorce from politics entirely, but the finale of season one—which takes Michelle, Brett and David out of Eagle Rock for a back-and-forth of sexual energy in a hotel in Sacramento—illustrates how the realities of charter schools are often quite beside the point for these three characters.

And though that is frustrating in its own way, it’s also illustrative of what has made “Togetherness” so appealing. These are characters that with just a shade or two of different framing would be much more infuriating. But because of the dexterity of the filmmakers and the surprising resonance of the performances, it’s hard not to feel for them, even when they are poised on the cusp of yet another terrible decision. And romantically, at least, this has worked beautifully in the show. Michelle’s decision to sleep with David is both completely understandable and even triumphant for her, and you feel it, as a viewer watching her transform for eight episodes. But you also feel the absolute devastation lurking around the corner for her husband Brett, who is finally becoming able to express his love for Michelle again. It can be, and often is, a deeply felt show.

This season, that has all changed. For a show that can be so self-aware about marital dynamics and Hollywood culture, the charter school subplot is a glaring blind spot, one that is given more and more screentime as the season progresses. No lessons are learned from critiques like Leibner’s of the charter school plot from season one; if anything, season two demonstrates a weird entrenching in a political stance that subverts the other positive elements of the show. If these characters are asking for our empathy despite seeming like the exact replicas of the privileged gentrifiers that are a dime a dozen on television these days, investing four different characters’ energy into the politicized belief that a charter school will solve their problems is not a very good strategy.

In the second season, Michelle becomes the sole organizer of the charter school; her former collaborator and former crush shies away from the project after she ends things with him, and her husband moves out of their house after learning about her (brief) affair. She finds a new collaborator, in the form of powerbroker-turned-homemaker Anna (Katie Aselton)—only to learn that Anna is sabotaging Michelle’s charter to introduce her own. The arc of “Togetherness”’ season two, which continues tonight and ends next Sunday, April 10, is about Michelle shaking off these major obstacles to succeed anyway.

And though I understand the character’s motivations (and think that Lynskey is incredible in the role), it’s a profoundly unsatisfying arc. When Michelle is motivated by consideration of and a sense of mission in charter schools, instead of desperation, she becomes an increasingly frustrating character, one who can’t articulate what she wants to keep her kids safe from in public schools but is driven almost wholly by that impulse.

And Anna, as her primary obstacle, is an extremely frustrating caricature, a kind of ennui-crazed super-bitch mean-girl whose encroachment onto Michelle’s turf looks and feels like a high-school manipulation. Anna and Michelle disagree over curricula; Anna becomes interested in a French program called Le Petit Village, which she describes in tonight’s episode as “a dual-immersion French charter school” featuring “French language arts, Singapore math, Montessori approaches” and the involvement of a professor from nearby Occidental College. She is advocating for a privileged, fenced-off environment for her privileged child and her privileged subsection of the Eagle Rock community, which is underscored by her ability to quickly raise money for Le Petit Village, while Michelle’s project is still stuck in Kickstarter drought.

This is all fine, and perfectly realistic, unfortunately; rich people gonna rich people, and mean girls gonna mean girl. But the odd element, for me, is the pretension that Michelle is any different from or better than Anna. The sentiment of excluding their children from the existing community of Eagle Rock that they’re currently gentrifying is identical. To paraphrase Leibner—public education is never even introduced as an option for the Piersons, which makes impassioned speeches like this from Michelle in season one all the more frustrating:

My daughter is going to start kindergarten and we’re talking about where is she going to go… what is she going to do… I’m wondering why is there not some community place — somewhere I can put her and feel good with a lot of different people. I don’t want to put her in a private school where she doesn’t get to experience what life is like where we live.

This is almost identical to what Mark Duplass said about the show's education plot in an interview last month on WBEZ, although unlike Michelle, he does directly address public schools:

Michelle's quest to find the right school for her children is also a quest for herself to be a part of a community of people that she can see in the neighborhood and know their names and feel comfortable sending her kids to their home. [...] The way that it struck us is like, there's three or four public schools in your neighborhood, two of which are awesome, one of which is not so great and one of which kind of sucks, is what it comes down to. And depending on what street you live on you get a little lucky or not.

There are a lot of sociopolitical assumptions manifest here. "Togetherness" tries to simplify the issue by making Anna into the Bad Gentrifier; it emphasizes her obsession with exclusivity and buzzy educational terms, as quoted above, and in next week’s finale, she hilariously starts using a fence as a design element for promoting Le Petit Village. Michelle, meanwhile, with her emphasis on “inclusion,” is the Good Gentrifier; in tonight’s episode, she takes that one step further by impulsively declaring Brett’s ridiculous soundscape/puppet “Dune” adaptation as part of her charter school’s curriculum, thus frustratingly yoking together an exclusive sort of diversity with a sudden discovery of arts education as a thing worth having.

Of course, in terms of the plot, Brett’s “Dune” thing had to resolve somehow, and connecting it to Michelle’s charter school makes for a nice, tied-off plot thread. But while this makes the charter school into a means to an end for the adult characters' arcs, it does not make charter schools less crappy, and it does not make Michelle's charter school better than Anna's Le Petit Village. An arts-and-humanities curriculum does not undo the exclusivity of cordoned-off education, and just because designing that curriculum creates a sense of purpose for two middle-aged hipster parents, that does not mean it will be a particularly good curriculum. There is an extraordinarily laziness at work here, and it's even apparent in Michelle's desperate scrambling for some new way to one-up Anna's well-funded, well-researched and well-considered idea. You almost wish, perversely, that Anna would win the dumb charter, so that at least the show would be honest about what charter schools really are and maybe would force the blinkered cast of characters to gain a bit more perspective.

“Togetherness”’s whole second season pivots on the idea of Michelle as a sort of community hero, and unfortunately, it falls completely flat. In last week’s episode, “Geri-ina,” Michelle discovers Anna has been holding meetings without her and then confronts her at a fundraiser at Anna’s swanky mansion. In the altercation, Michelle pushes Anna into her pool. It’s supposed to be a triumphant moment, like Michelle winning the kick-the-can game against the eventually sympathetic park hipsters in last season’s fifth episode. But the victory here seems like ego run amok. Anna never has a moment of reconciliation; Michelle never experiences an ounce of self-awareness, and, without giving too much away, the finale next week falls even further down the rabbit hole of self-satisfied moralizing about Art, Community and The Children—dragging all four lead characters, the community of Eagle Rock, and the legacy of “Togetherness” along with it.

Because that is the other thing, and an important thing; next week’s episode of “Togetherness” is its last. HBO decided not to renew the show after this second season, and although low ratings are probably the reason why, it is not difficult to imagine that a certain amount of political blinkeredness might have soured viewers on Michelle, Brett, Alex and Tina (Amanda Peet). In that vein, one of the things that continually amazed me, in watching “Togetherness,” is Brett and Michelle’s purported engagement with the community they live in; where the idea of community was desired and elusive in the first season, by the second there is a relatively stable contingent of supporters and friends who, in the last two episodes especially, end up doing all kinds of risky and sort of ludicrous things to get this particularly odd vision of a non-exclusive-but-still-exclusive school off the ground. They believe, mostly silently, in Michelle’s nearly nonexistent vision; they listen, mostly silently, to Brett and Alex’s bizarre stage directions. It sincerely makes me wonder: Who does “Togetherness” think the rest of us out in the world really are?