A (semi-)defense of Reince Priebus: Don't expect the RNC chair to save the party from Trump

Faced with a Trump nomination, RNC chair Reince Priebus has few good options, but war with Trump is among the worst 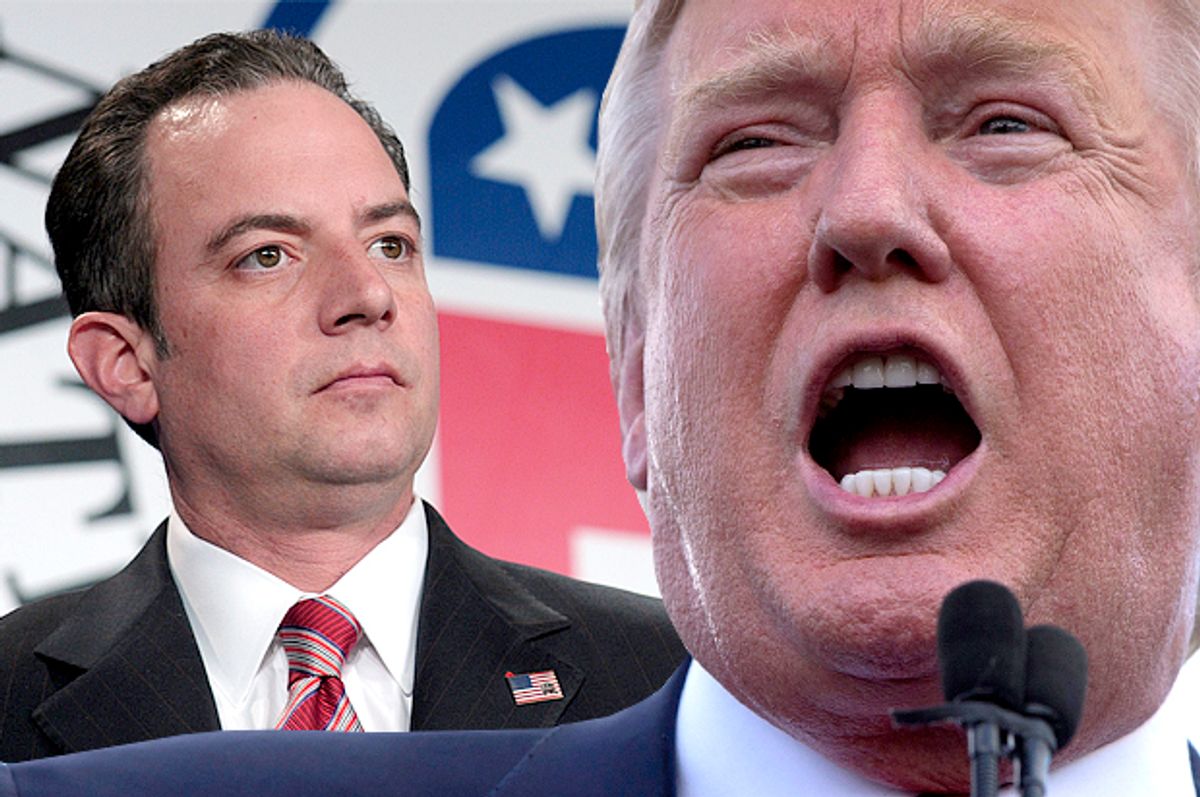 There’s always stiff competition, but the worst job in Washington, DC right now probably belongs to Republican National Committee chairman Reince Priebus (a.k.a. Reince Pubis). This poor schmo has to spend each day standing amid the smoldering detritus of his carefully considered 2016 plans and try to figure out how to salvage something from the wreckage.

After the Republicans’ 2012 defeat, Priebus led the RNC’s effort to revamp the party for 2016 success – that meant expanding the GOP’s appeal across demographic groups and reworking the presidential primaries to make it tougher for insurgent yahoos to challenge the party-approved candidates. That’s all been destroyed. Comprehensive immigration reform (the one policy recommendation the RNC made as part of its path forward for the GOP) was smothered in its crib by nativists in the House of Representatives. And the primary schedule that was supposed to grease the skids for Jeb Bush or Scott Walker instead ended up with GOP 2016 frontrunner Donald Trump, who has spent the better part of a year making Priebus’ life hell.

The latest indignity came just last week as Trump, fresh off a round of horrible press and a disavowal of his pledge to support the Republican nominee, parachuted into DC for a secret meeting with Priebus at which they discussed, among other things, the Trump campaign’s obvious ineptitude. The New York Times’ account of the meeting portrays a patient, if slightly exasperated, Priebus entreating the likely Republican nominee to at least try to maintain a positive relationship with the party committee. Per the Times, Priebus “told Mr. Trump and his team that the party wanted to be helpful to him but that it was difficult to do so in the face of his routine criticism.” After the meeting, both Trump and Priebus had lovely things to say, with the chairman reiterating that everyone will support the Republican nominee, whoever it is.

This meeting and its tone provoked some exasperation from anti-Trump conservatives who have grown weary with the RNC’s unwillingness to forcefully stand up to the toxic frontrunner. Washington Post writer Jennifer Rubin wrote a long post lashing out at the “arrogance and moral vapidity” of the RNC chair:

It would be bad enough if Priebus had merely been afraid to speak up when Trump denigrated women and minorities, confirming the image of the party as a bunch of narrow-minded bigots, and when Trump’s campaign manager was caught on tape assaulting a female reporter. Spinelessness would have been regrettable but unextraordinary for a party operative. No, he has done worse than that. He has cast Trump as just another qualified candidate, offering his party to a thug who would turn it into an organization dedicated to his cult of personality and authoritarian mind-set. Furthermore, he has done incalculable damage to the work of shedding the GOP’s image as the old white man’s party.

Priebus does not seem to be a bad man. He is a foolish one, however, injuring the party and the cause of conservatism at the time it could use, if not moral leadership, then at least the discretion to know when to shut his trap.

Folks, if you’re clamoring for “moral leadership” from the head of a party committee, then you might have to adjust your expectations a bit. The fact that anti-Trump conservatives are looking to a DC insider and jumped-up bureaucrat like Priebus to rescue the movement is a good indicator of how desperate things are.

I understand the frustration with Priebus, but what the hell else is he supposed to do? The window for delegitimizing Trump and dismissing him as an unqualified candidate snapped shut permanently the moment the polls closed in New Hampshire. Trump is quite obviously a dangerous candidate and he’s ripped open fissures within the GOP that threaten its continued existence, but he’s amassed the most votes and the most delegates by working within the process set up by the Republican National Committee to select a presidential candidate. If Priebus shuts out Trump now, that’s tantamount to a declaration of war on the party’s likely nominee, who will use his considerable media presence to do everything he can to ensure that the Republicans go down in flames this November.

Priebus' job is to somehow prevent that from happening, and he can still use the process to pull off the unexpected and deny the nomination to Trump. It’s not his job to render moral judgment on the fitness of individual candidates or fret about the health of the conservative movement. Has Priebus screwed up? Yes, undoubtedly. The “loyalty pledge” he circulated among the 2016 candidates last year was intended to bring Trump to heel, but all it did was handcuff the other candidates to Trump, making it impossible for them to credibly attack him as manifestly unfit for the presidency. Priebus is an important cog in a political machine that has exploited and encouraged the same toxic political forces that are now powering Trumpism. If Republicans crash and burn in November, he will absorb a good deal of the blame.

But you can’t expect the guy to save the party from Trump. The forces at work here are well beyond the control of a party apparatchik like Priebus.