This is all the proof we need: Donald Trump isn't the only Republican who wants to punish women for abortion

The GOP frontrunner has earned opprobrium for his anti-choice statements, but don't be fooled. He isn't alone 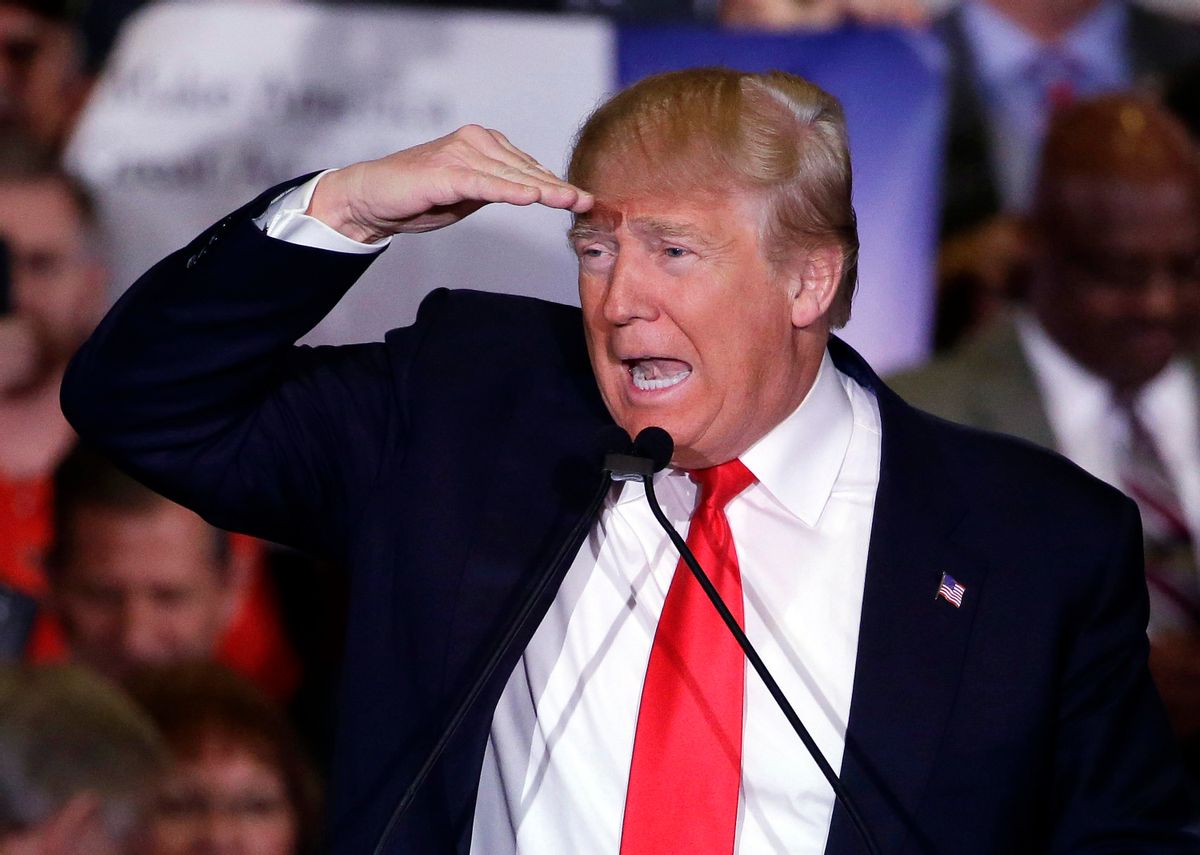 Once again, a major political figure has gaffed by accidentally admitting the truth.

As we're all aware by now, Donald Trump's first instinct when asked by MSNBC's Chris Matthews whether women who have illegal abortions should be punished was to answer: "Yes."

TRUMP: The answer is there has to be some form of punishment.

MATTHEWS: For the woman?

Within hours, Trump's staffers backpedaled on the issue, suggesting that only doctors should be punished and that women are "victims." Of course this makes no sense in the context of how anti-choice Republicans regard abortion as literally homicide, at best, and a holocaust against the unborn at worst. If that's truly the case, and we have no reason to doubt they believe it, then women who have illegal abortions following some sort of nationwide ban would, at the very least, be the masterminds of the crime -- voluntarily requesting the so-called "murder" of fetuses. Under this future ban, it'd be the hypothetical equivalent of a wife hiring a guy to kill her husband.

In fact, I suspect that if abortion is banned and sanctioned as murder, then women would have to be held criminally accountable. If it's codified as murder, there's no way around it without unleashing every criminal defense attorney who'd use a penalty-free abortion ban as precedent to exonerate convicted murderers. Rand Paul, for instance, has twice introduced what's known as "fetal personhood" laws, granting human embryos and fetuses full rights and protections under the law, which would, logically, make it homicide to kill a fetus, just as it would a birthed person.

Republicans, however, appear to be totally flummoxed by this obvious conclusion.

When asked about Trump's non-gaffe gaffe, John Kasich, who is arguably far more radicalized against reproductive rights than Trump, told George Stephanopoulos on Sunday that punishment is a matter best left up to the states, but that women probably shouldn't be punished.

KASICH: Well, that will be up to the states to figure out what they want to do. And, you know, obviously, when we have seen these comments that have come out earlier this week, it's the first time I've seen the pro-life and the pro-choice people come together to say, you know, that we'll have to basically work this out and trying to punish a woman would not be the appropriate way to behave.

State governments can barely pave roads or conduct elections. Should states really be authorized to handle such a complicated issue? Not a chance in hell. The states are where the most awful and draconian restrictions are being passed, and they all specifically target women as culprits, even though criminal penalties haven't been authorized. Irrespective of Kasich's tone, make no mistake: the intent of the anti-choice movement has always been to target and attack pregnant women as baby killers. Now that they're corned about it, they're afraid to admit it.

So, how can we be sure that Republicans do, in fact, want to punish women who have illegal abortions, even though they refuse to confess? The process is already underway and here's how.

1) The protests. Every protest outside every clinic has included the deliberate shaming of women as they endure the treacherous gauntlet of bug-eyed, shrieking zealots armed with oversized photos of aborted fetuses. The targeting of women is so strikingly obvious that it defies logic when we hear Republicans deny that women should be punished.

Speaking of which, a recent study by Joseph Packer titled, "How Much Jail Time? Returning Women to the Abortion Debate?", documented the anti-choice movement's inability to answer the punishment question. An accompanying video of anti-choice protesters appearing confused by the question is a must-watch. The protesters either didn't know how women should be punished, or they outright denied that women should be punished. One protester said women who have illegal abortions should simply be prayed for.

2) Existing anti-choice laws punish women already. The truth is that women have been systematically punished by anti-choice laws across too many red states. Perhaps not in a crime-and-punishment way, but certainly the process of seeking and receiving an abortion has evolved into one of shame, peril and hardship, even before the procedure itself.

-- Most recently, Governor Mike Pence and other Indiana Republicans have banned virtually all abortions in their state. Elsewhere, women have been targeted with intimidation, be it with government-mandated transvaginal ultrasounds or punitively long waiting periods or by being forced to listen to fetal heartbeats.

-- In Texas, the ban on late-term abortions forced one woman to carry a dead fetus to term. It might not be jail time, but it's arguably one of the most tragic sanctions any woman or any couple should be forced to endure by the will of their government.

Women who seek safe and legal abortions from coast to coast are practically fugitives pursued by the Republican Party and other activists so extreme they make Donald Trump seem like a respectable and decent human being.

3) Women have already been arrested and imprisoned for having illegal abortions. Sure, they didn't seek out a clinic and medical professionals for their abortions. They simply induced themselves to have spontaneous abortions in violation of new "feticide" laws. Almost exactly one year ago, Salon reported on the imprisonment of Pervi Patel, an Indiana woman who was sent to prison for having a miscarriage, also known as a "spontaneous abortion." And Ms. Patel wasn't the first.

Purvi Patel, the second woman to be prosecuted under Indiana’s feticide law, was sentenced to 20 years in prison on Monday, after being convicted of feticide and neglect of a dependent. The 33-year-old faced up to 70 years in prison for allegedly attempting to induce an abortion and giving birth to a live child, who prosecutors argued later died because of her neglect. Patel, however, has consistently maintained she had a miscarriage.

Elsewhere, in Alabama, Lauderdale County District Attorney Chris Connolly attempted to gain custody over the fetus of "Jane Doe," who was incarcerated for a drug offense. Doe attempted go through standard channels, including a court order to have an abortion, but Connolly stepped in to have Doe's parental rights rescinded, making her fetus a ward of the state. The most bizarre twist in the story is that per a 2004 law, the fetus was assigned legal counsel -- a "guardian ad litem" to argue for its rights.

If these circumstances weren't terrible enough, over the last several years, anti-choice Republicans have successfully forced pro-choice activists to debate whether rape, incest and life-of-the-mother should be exceptions, rather than maintaining the debate solely in terms of keeping abortion safe and legal. By debating the exceptions, pro-choice activists have to abandon their most crucial argument, which is that women have the right to maintain privacy and sovereignty over their bodies. And now that punishing women has been injected into the debate, pro-choice groups are once again lassoed into another debate on the anti-choice movement's terms. Consequently, and despite Trump's blurtings and the anti-choice movement's befuddlement, the Republicans continue to preserve the initiative on the abortion issue.

The unspoken truth is totally out of the bag and they simply don't know how to talk about it out loud yet. But they'll surely figure it out, and when they do, it won't be a shocker to anyone who's been paying attention to the GOP's language as well as its cavalcade of reproductive Jim Crow laws.