Bernie spoke out against tax havens & Panama Free Trade Agreement 5 years ago. Hillary was on the side of the rich 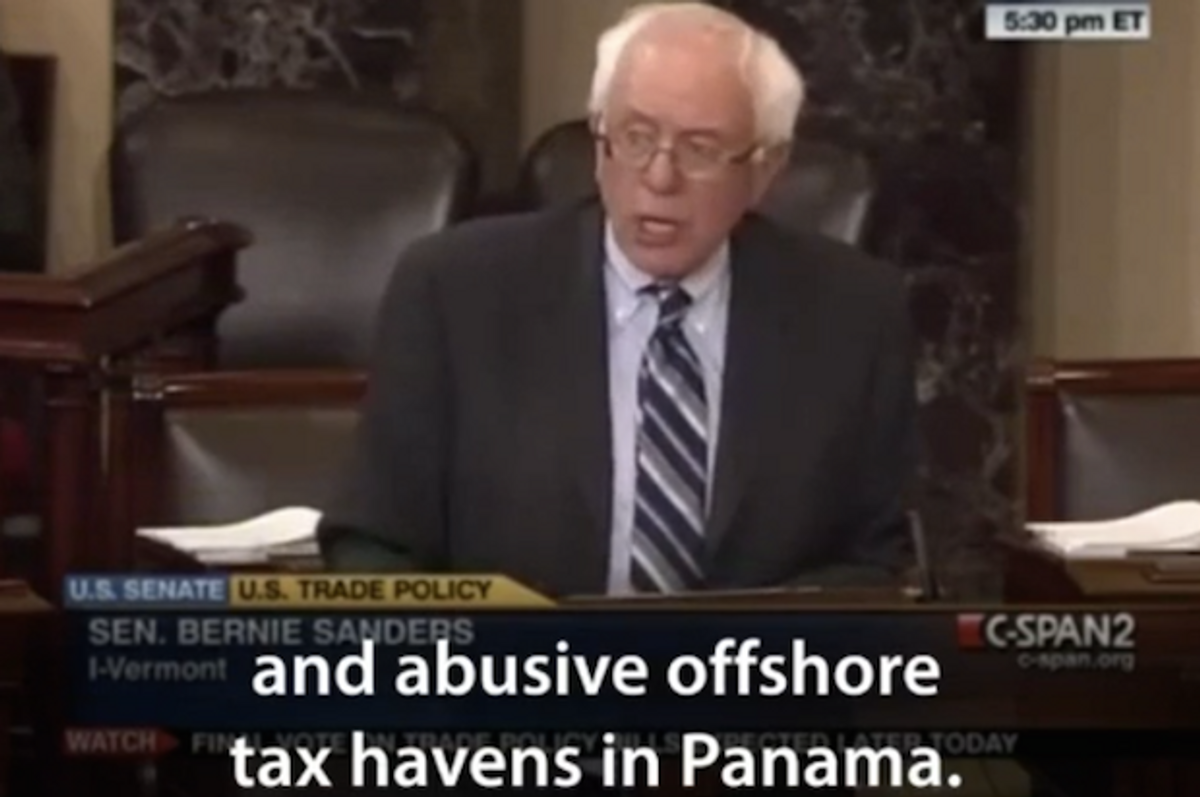 Bernie Sanders criticizing the Panama Free Trade Agreement that led to the Panama Papers scandal, on the Senate floor on Oct. 12, 2011 (C-Span2/YouTube)
--

The Panama Papers scandal exploded this week, with revelations that many of the world's most powerful politicians are implicated in widespread, systemic corruption.

Sigmundur Davíð Gunnlaugsson, the right-wing prime minister of Iceland, was pressured into resignation after the leak exposed his exploitation of tax havens. He is just one among a dozen current and former heads of state in the middle of the controversy.

Presidential candidate Bernie Sanders spoke up about the issue on Monday. His campaign posted to Facebook a video of an October 2011 speech in the U.S. Senate, in which Sanders condemned the Panama Free Trade Agreement that was being considered at the time.

Then-Secretary of State Hillary Clinton and President Obama both supported the Bush administration-negotiated agreement, which ultimately made tax evasion an even larger problem. Progressive NGOs and watchdogs warned that this would happen at the time, but Clinton and Obama ignored them and strongly pushed for the deal.

Sanders, on the other hand, was one of the few voices to challenge the neoliberal trade deal.

Sanders began his statement on the Senate floor noting that Panama's economy is incredibly small, with an economic output of just 0.2 percent of the U.S. economy's. (Panama as a country, in fact, did not exist until the beginning of the 20th century, when the U.S. carved it off of Colombia and built an important canal there.)

"So I think no one is going to legitimately stand up here and say that trading with such a small country is going to significantly increase American jobs," he explained.

Why, then, was the U.S. considering a free trade agreement with the country? He asked.

"Well, it turns out," Sanders continued, "that Panama is a world leader when it comes to allowing wealthy Americans and large corporations to evade U.S. taxes by stashing their cash in offshore tax havens."

The Panama Free Trade Agreement, the Vermont senator argued, would there "make this bad situation much worse."

As the release of the Panama Papers has shown, Sanders turned out to be correct.

In his 2011 speech in the Senate, Sanders quoted a study by the progressive advocacy group Citizens for Tax Justice, which had found that Panama is likely "the worst" tax haven.

The free trade agreement Clinton and Obama supported "would effectively bar the United States from cracking down on illegal and abusive offshore tax havens in Panama," the Vermont senator pointed out.

"In fact, combating tax haven abuse in Panama would be a violation of this free trade agreement, exposing the U.S. to fines from international authorities," he stressed.

Sanders also emphasized that the U.S. was losing up to $100 billion in taxes every year "as corporations stash their money in" tax havens like Panama, the Cayman Islands and Bermuda.

"At a time when we have a $14 trillion plus national debt, and at a time when we are frantically figuring out ways to try to lower our deficit, some of us believe that it is a good idea to do away with all of these tax havens by which the wealthy and large corporations stash their money abroad and avoid paying U.S. taxes," Sanders said.

"The Panama Trade Agreement would make that goal even more difficult," he added.

Emails released from Clinton's private email server show that her State Department played an important role in pushing for the agreement.

As secretary of state, Clinton also pushed hard for the Trans-Pacific Partnership, or TPP, a neoliberal trade agreement that is very similar to the Panama deal, but exponentially larger.

Labor and environmental groups warn the TPP, which has been described as "NAFTA on steroids," would be disastrous for the local economy and the environment.

Clinton now claims to oppose the TPP, but she helped create it as secretary of state, and publicly lobbied on behalf of it scores of times.