Donald Trump's "insult haiku": Scholars are having a field day parsing the poetics of Trump's "idiolect" 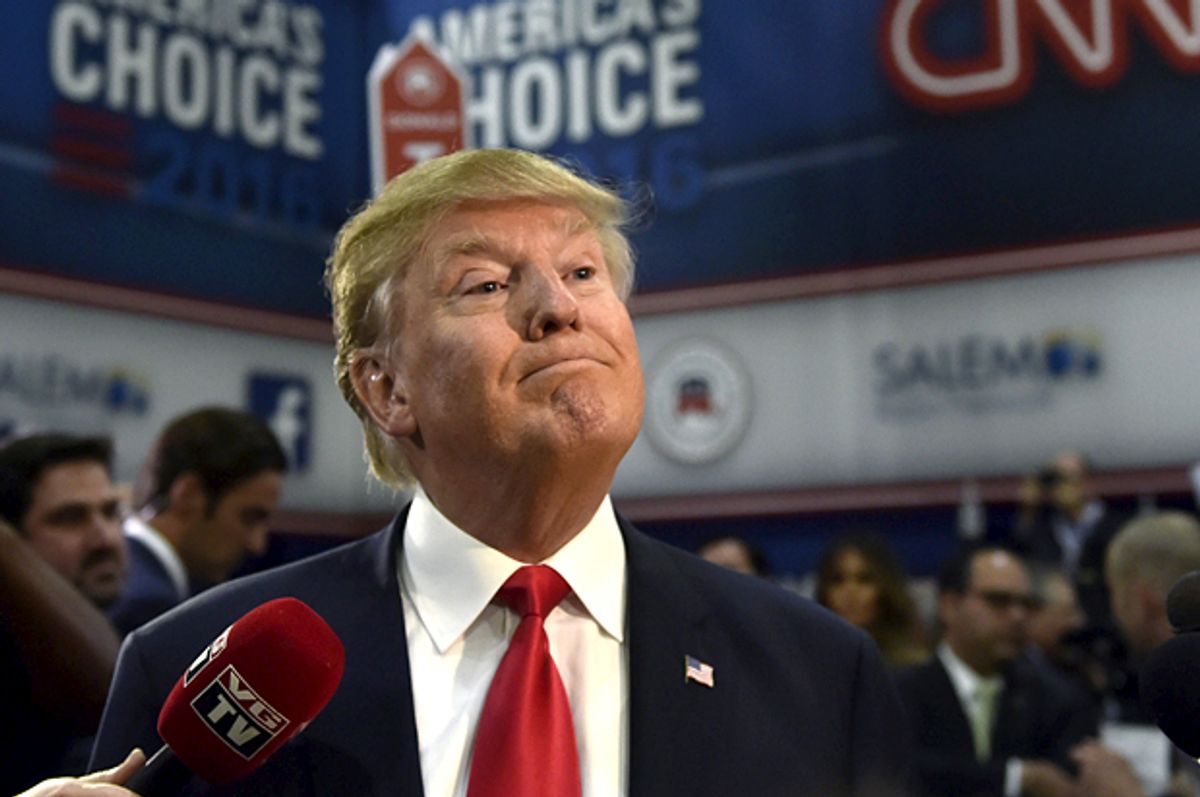 How to explain the “idiolect” of Donald Trump? An “idiolect,” explains sociolinguist Jennifer Sclafani, is “not the language of idiots, but an idiosyncratic form of language that is unique to an individual.” Trump’s use of words, of which he has many and only the best, is easily imitated yet utterly unique. Whether his manner of speaking helps or hurts him politically is beside the point: what matters is that it shines through own tweets and non-speeches with consistency. He has a big, voice-y voice, the kind that literary agents say they are looking for in new, exciting manuscripts. It cries out for intellectual analysis. Academia has risen to the challenge. Predictably, the Internet School of Trumpology instantaneously split into two scholarly sub-specialties: Trump Tweet; and Trump Speak. The iPhone versions of what semioticians call langue (language) and parole (word).

A Chaucer scholar, “KC,” who specializes in Middle English alliterative meter, argued that Trump’s tweets “resonate with us because of their tripartite flow; I would argue that the three-line haiku appeals to us for the same reason.” KC reminds us of the power of three, which saturates culture in variants such as the Holy Trinity of Christianity, to the simple incantation of three-time’s-a-charm common to fairytales. “Rhetorically, then,” KC suggests, “dividing a message in threes like this will satisfy our unconscious desire for this pattern.”

That tripartite pattern has become so closely aligned with the Trump Tweet that the Massachusetts Institute of Technology’s Computer Science and Artificial Intelligence Lab created a bot that generates Trumpisms and spits them out under the Twitter handle, “Deep Drumpf.” Alarmingly, many are virtually indistinguishable from actual tweets by the real Donald J. Trump.

Tongue in cheek, linguists have proposed establishing the field of Trump Insult Haiku Studies to better mine the nuances, form, and meaning of his tweets. Meanwhile, however, scholars of Trump Speak have been busy. The most recent contribution to Trumpology is the “Journal of Complete & Utter Nonsense Talking.” The brainchild of  Matt Crawford, an American “experimental social cognitive psychologist, fan of the surreal, the absurd, the bizarre, and the darkly comic,” the ersatz journal manages to satirize Trump Speak as well as the academic conventions being used to unpack it.

It’s all cover and no content except for a sample page of the kind that researchers get to see as a tease for scholarly papers behind exorbitant paywalls.

Crawford’s latest parody is a paper written by “Donald J. Trump, scientist.” The paper’s title is:  “A title for a really great piece of research just the best, really”; it only cites publications written by Trump and is also externally reviewed by Trump. Writing as External Reviewer 2, Trump gives himself a terrible assessment, calling his research “sad. Really Sad.” Wherefore he, Trump, decides to make research great again. How? He buys the journal on the spot and fires the editor along with the (nonexistent) board. “All of you, fired.” He then promises to build a paywall, a really big paywall. Because walls.

The bleak genius of Crawford’s approach is that he is not just critiquing Trump but also the corporatization of academy along lines bemoaned by Noam Chomsky, who ties our current political crisis to a steady erosion of actual education in favor of glorified obedience training. As a billionaire member of the plutocracy, Trump can fire any worker on a whim, including university professors who, as a group, are now members of the precariat, defined as labor that is cheap, vulnerable, and disposable. Yet the “Journal of Complete & Utter Nonsense Talking” isn’t just referring to Trump but to the hermetic elitism of the Ivory Tower, a condition once examined by German author Herman Hesse in the novel, Magister Ludi: The Glass Bead Game, which won the Nobel Prize for Literature in 1946, and was itself a parody of the genre of biography.

When the world is in crisis, scholarship for its own sake is not enough. In the wake of World War II, the ethical questions raised by Hesse’s characters’ decision to pursue a pure life of the mind were perhaps self-explanatory. The irony of academics today, busily parsing Trump’s idiolect using the tools of linguistics, semiotics, and literary criticism, is that such “useless” specialties have suddenly become valid in the public realm because they are amusing. The glass bead tying Trump to his dominance of the mass media is pride in anti-intellectualism, even as the noble ideals of the Ivy league threatens to turn those gated retreats into The Garden of the Finzi Continis.

“it is beyond dispute that critical thinking has been abandoned as a cultural value,” writes David Niose. “Our failure as a society to connect the dots, to see that such anti-intellectualism comes with a huge price, could eventually be our downfall.” Is it still possible to change? Maybe. Someone tweeting for Hillary Clinton’s team quietly took the form of the Trump Insult Haiku but changed its contents. The message: “At this point, Donald Trump has insulted the vast majority of Americans. The good news is, there's something we can all do about it: Vote.”