Martin Scorsese's groundbreaking film turns 40 this year, and the 1970s issues that fueled it are still with us 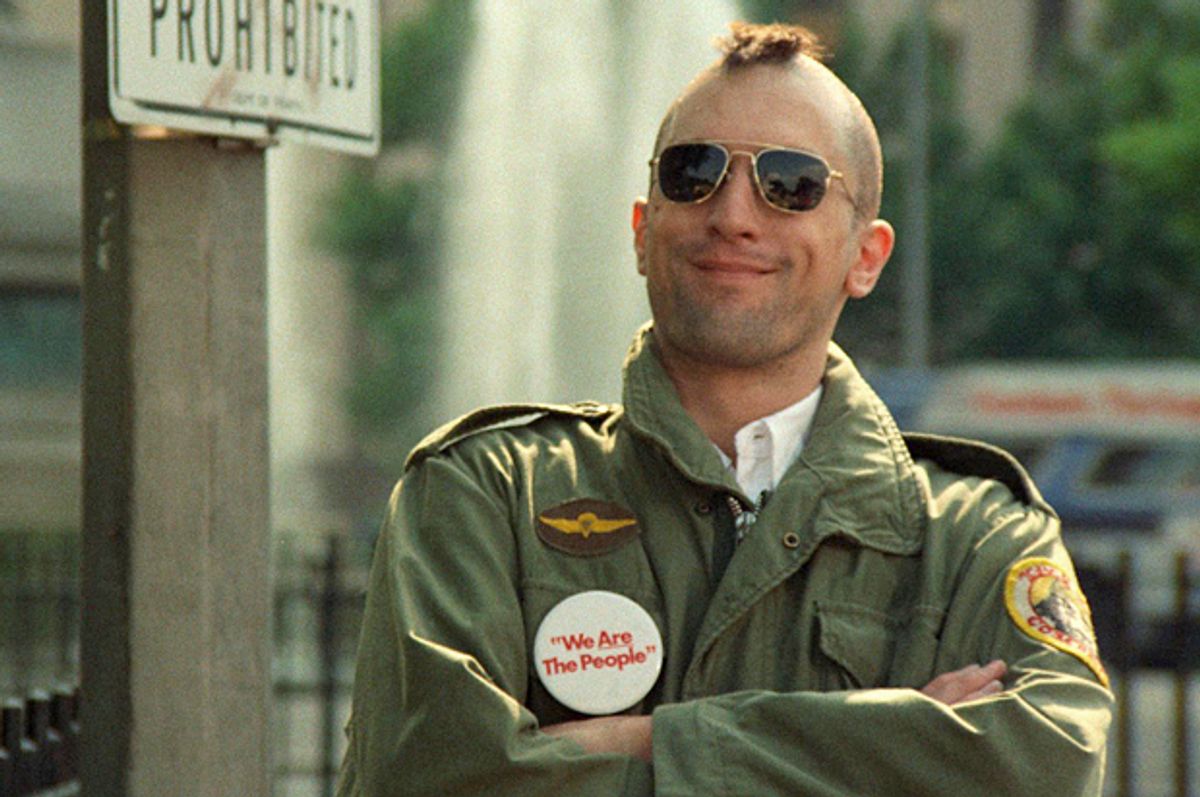 Perhaps the two greatest American movie of the 1970s – “Chinatown” and “Godfather II”– were set in the past. The most influential film of the decade, the original “Star Wars” movie, was set “A long time ago, in a galaxy far, far away.”

But one ’70s film set in what was then the present is still with us. “Taxi Driver,” which gets a 40th anniversary screening at the Tribeca Film Festival on April 21, is both a great movie on its own terms and a film that has come to seem more and more relevant.

Many large American cities – especially New York, which was at a particularly unpleasant low point when the movie was being shot and released in 1975 and ’76 – are now far cleaner, safer and more prosperous. Between New York’s High Line and the polished, teched-out neighborhoods of San Francisco, urbanites seem to be living in a world very far from that of Martin Scorsese’s film. But underneath the surface, some of what the film documents hasn’t changed.

If there's anyone out there who still hasn’t seen “Taxi Driver,” the movie follows Robert De Niro’s Travis Bickle, a depressed and confused loner, discharged from the Marines, who drives a cab and spirals down as the film goes on.

He fixates on a teenage prostitute name Iris, played by Jodie Foster, and tries to assassinate a senator running for president. At the end of the film, Travis kills Iris’ pimp, played by Harvey Keitel. Screenwriter Paul Schrader was going through a very rough time when he wrote the script, and it shows. Travis is always looking out his windows at the city and cursing what he sees.

The 1970s may’ve looked at the time like a uniquely bad period in American history, but in some ways the decade opened the door for the world we still live in. We got, arguably, the birth of American independent film – and filmmakers like Quentin Tarantino were deeply influenced by the movie – and energized movements for rights for women, gays and lesbians, and racial minorities.

We also got the beginning of intense inequality, a loss of faith in politics, and the beginning of a period of frequent recessions. In many ways American life is better than it was in the ’70s, but the problems the movie documents endure – guns drifting into the wrong hands, the dangerous disorientation of veterans, the sexual exploitation of children and the heightening of racial resentment. (Travis’ distrust and envy of black men runs through the movie.) Some of the pain is around the urban fringes and rural areas now instead of in, say, Manhattan. The violence is more likely to be solider suicides, police firing at black men, and school shootings than loners stalking politicians, too.

And if you want to see anger, check in with the rage behind American politics. Both Democrats and Republicans are incensed and insecure.

One of the many intriguing things described in The Hollywood Reporter’s oral history of the film is the incredible fight the filmmakers went through before “Taxi Driver” could see the light of day. Scorsese, for instance, describes showing an early cut of the movie to Columbia’s executives:

We had one screening at the studio in a small screening room for some friends, and then it was shown to the studio. I don't recall what my friends said, but people were kind of perplexed. I believe it was the next day that the studio saw it and there was a smiling kind of reaction that was very brief. Then I heard word that they were concerned that women wouldn't like the film. Then, what had happened was that the film was shown to the MPAA and it was given an X rating. There was no way the studio was going to release an X, understandably. I had the same problems with "Mean Streets." I'm used to it. We were told we were going into a meeting and the studio was going to discuss with us how to proceed. We sat down, took out a pen, and the studio exec turned to us and said, "Cut it for an R or we cut it." Then we were dismissed.

Even after endless screenings for the MPAA and numerous tiny changes to the film, Columbia only released “Taxi Driver” to two cinemas.

Scorsese and “Taxi Driver,” of course, prevailed: Great art won – thanks to the advocacy of critics and the enthusiasm of audiences. And we’re left with a powerful film, beautiful urban areas, and a country that’s still dealing with anger, poverty, violence and threat. The details have changed, but break out of the nice addresses, and “Taxi Driver” shows an America a lot of people still inhabit.