Behind the music on "Vinyl": Patti Smith, more Magic Tramps and Springsteen, who's "like an approachable Dylan"

On the ninth episode of HBO's series about the '70s music scene, ACR considers swiping the Boss from Columbia 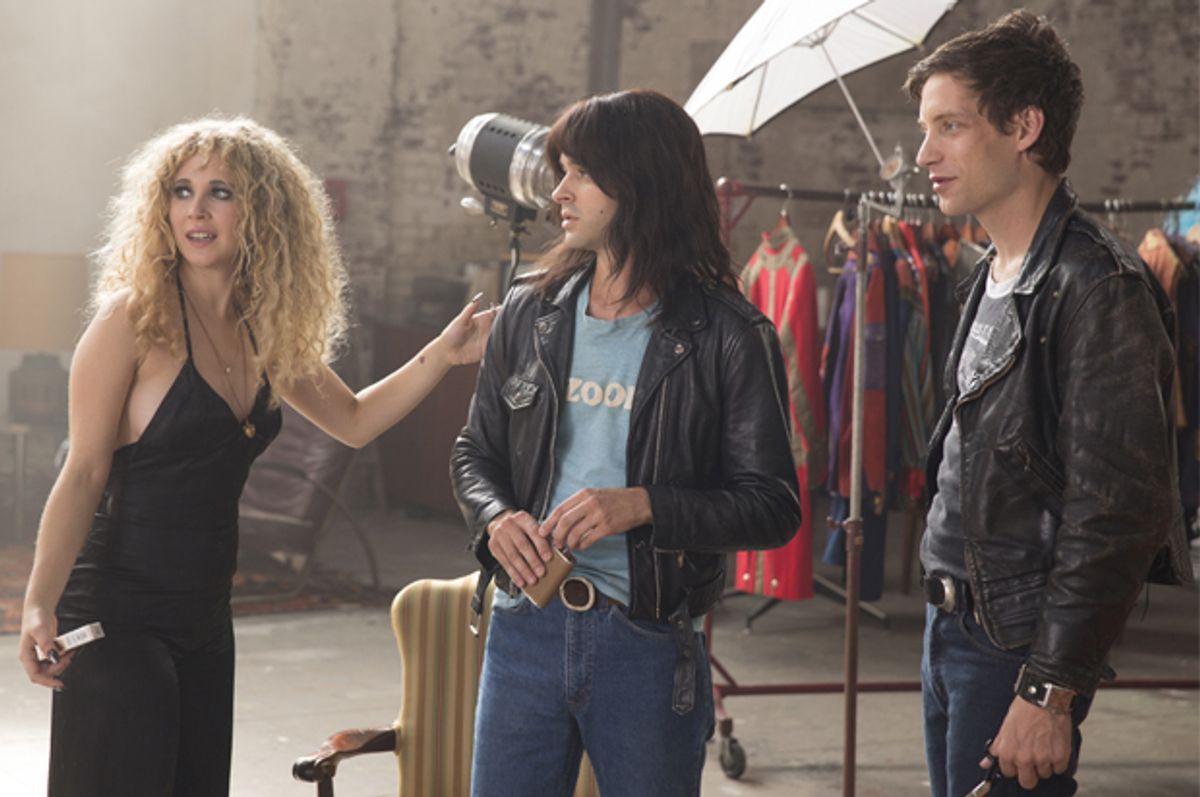 This week on "Vinyl," it’s A&R (artists and repertoire) meeting time at American Century Recordings, where they sit around and talk about new acts and current acts. There’s a TDK T-60 cassette playing in the Panasonic tape deck, and we can see “PATTI SMITH HEY JOE MAX’S” written on the label in black sharpie. While it does sound like Patti Smith singing her take on Jimi Hendrix’ version of “Hey Joe,” it’s not a live recording, it’s not from Max’s Kansas City, and it’s not from 1973.

Patti Smith gave her first performance in February of 1971, reading poetry at St. Mark’s Church, accompanied on many by Lenny Kaye on guitar. That performance attracted a lot of attention, and she had several offers of management, people who wanted to package her up, create an act around her--impresario Steve Paul wanted to pair her off with guitarist Rick Derringer, for example--and she turned all of the offers down. She spent the next couple of years honing her craft, figuring out what she wanted to do next, what rock and roll looked like to her.

Patti actually did play Max’s Kansas City in 1973, but it was in December, the very last week of the year, supporting folksinger Phil Ochs. Six nights, December 26-31, two sets per night. But she couldn’t have performed “Hey Joe” in 1973 because she hadn’t written it yet. Patti’s lyrics focus on and were inspired by Patty Hearst, the California heiress who was kidnapped by the Symbionese Liberation Army in 1974. “Hey Joe” would end up being the A-side of her first record, a 45 rpm single she recorded in the Spring of 1974 at “the house that Jimi built,” Electric Lady Studios in Greenwich Village. The recording was funded by her boyfriend and partner in crime, Robert Mapplethorpe, who wanted to help support her art. The single was released independently on Smith’s own Mer Records shortly thereafter.

While Julie (Max Casella), who we saw skulking around Max’s in the last episode, is attempting to act like he gets it, the rest of the table is less than impressed. Hearing the smirks and watching the visible derision--Zak (Ray Romano) says, “Don’t wanna piss her off!”-- was just like being back in high school again. Richie (Bobby Cannavale) magnanimously says, “Worth a look,” and then the team moves on to the next act.

At the end of the meeting, as Richie runs out of the room (yet again), we hear Andrea (Annie Parisse) ask, “Who’s going after Magic Tramps? We got a plan?” That statement is actually the most objectionable one of the entire episode (well, short of Andrea’s later lecture about how women can’t be in A&R, but a feminist reading of the show would be entirely too depressing).

It is completely improbable that anyone at American Century Recordings — the label proud of passing on the New York Dolls, the people who make fun of Zak’s signing of Xavier and who are freaked out by the Nasty Bits and Patti Smith — would find the Magic Tramps palatable on any level. As noted in the recap for Episode #2, the Magic Tramps were glam pioneers, and like most pioneers, they were completely before their time. Led by Warhol superstar Eric Emerson, the Magic Tramps were wearing face paint, glitter and playing the type of music later thought of as glam rock before anyone else--before KISS, before the New York Dolls--in fact, the Dolls got their start at the Mercer Arts Center opening for the Magic Tramps. It’s laudable that "Vinyl" keeps referencing the Magic Tramps (their song “Magic In The Moonlight” was featured in the second episode, and “My Reflection” was covered by Jesse Malin for Episode 7), but it is pointless to rewrite history.

Julie later strolls into Richie’s office to discuss another of his Max’s Kansas City discoveries: “I saw an act Friday I wanted to tell you about: Bruce Springsteen.” “Isn’t he at Columbia?” Richie answers. “Yeah, but his records ain’t doin’ much. He thinks they may dump him. We could maybe get in there,” Julie suggests. “He’s soulful. He’s a throwback in some ways. He’s like an approachable Dylan.” It’s like a Bruce bingo card!

As previously noted several times, "Vinyl" likes to play fast and loose with the 1973 timeline. Springsteen’s first album, "Greetings From Asbury Park," was released in January of 1973, and his second record, "The Wild, The Innocent & the E Street Shuffle" came out in September of that year. While it is 100 percent true and accurate to say that Bruce Springsteen’s first two albums did not do well commercially, this was in an era where labels developed acts. Springsteen was signed to Columbia by John Hammond, and they hadn’t been out long enough to make a decision. (Also, there is literally no way Bruce was having this conversation with someone from a record label without his manager at the time, Mike Appel. Springsteen was not very business-savvy at this particular juncture. That would change later.)

Our A&R exile to the mailroom, Clark (Jack Quaid), grabs a copy of the latest record from Indigo, the dance act that the label wants to dump. Together with his now-frenemy Jorge (Christian Navarro), they go back up to the Bronx to another party. As they walk into the room, the DJ is playing “Soul Makossa,” which you’ll probably recognize from the sample on Michael Jackson’s 1983 single, “Wanna Be Starting Something,” from "Thriller."

“Soul Makossa” was a record by a Cameroonian artist named Manu Dibango, which a NYC DJ discovered in 1972 while record hunting in a West Indian music store. Once it became a hit at one club, DJs all over the city tracked down their own copies. The song would make it onto the radio airwaves on New York City’s legendary R&B station, WBLS, Atlantic Records would end up licensing the song and officially releasing it in the United States, and Dibango would end up playing at Yankee Stadium as part of the lineup for the “1st Latin Soulrock Fiesta!”

So there is literally no way that anyone, let alone an unknown white dude with zero connections or credibility, is going to walk into a Bronx party in the '70s and tell the DJ to take off the biggest dance hit of the year. The Indigo song brings the crowd to a standstill, and then, magically! Suddenly half the crowd has disco dance moves. Indigo isn’t a real group; the song is called “Kill The Lights (with Nile Rogers)” by Alex Newell and DJ Cassidy. If you’re going to make a fake '70s disco song, at least they had the common sense to ask Nile Rogers, the now-legendary producer and founding member of Chic, to be involved. It certainly sounds like '70s disco, but let’s be honest, it is not something that is going to stop the dance floor over “Soul Makossa.”

The Nasty Bits’ single is done, and Richie listens to it at full volume in a dark and empty office while he considers how to try to get out of the mess he’s in. But let’s pass judgement on the potential of the Nasty Bits next week, after the season one finale.