"Media can be the greatest force for peace on earth": Amy Goodman reflects on the 20th anniversary of "Democracy Now!"

When the media "simply acts as a PR machine for those in power, this all has to be challenged," says Goodman 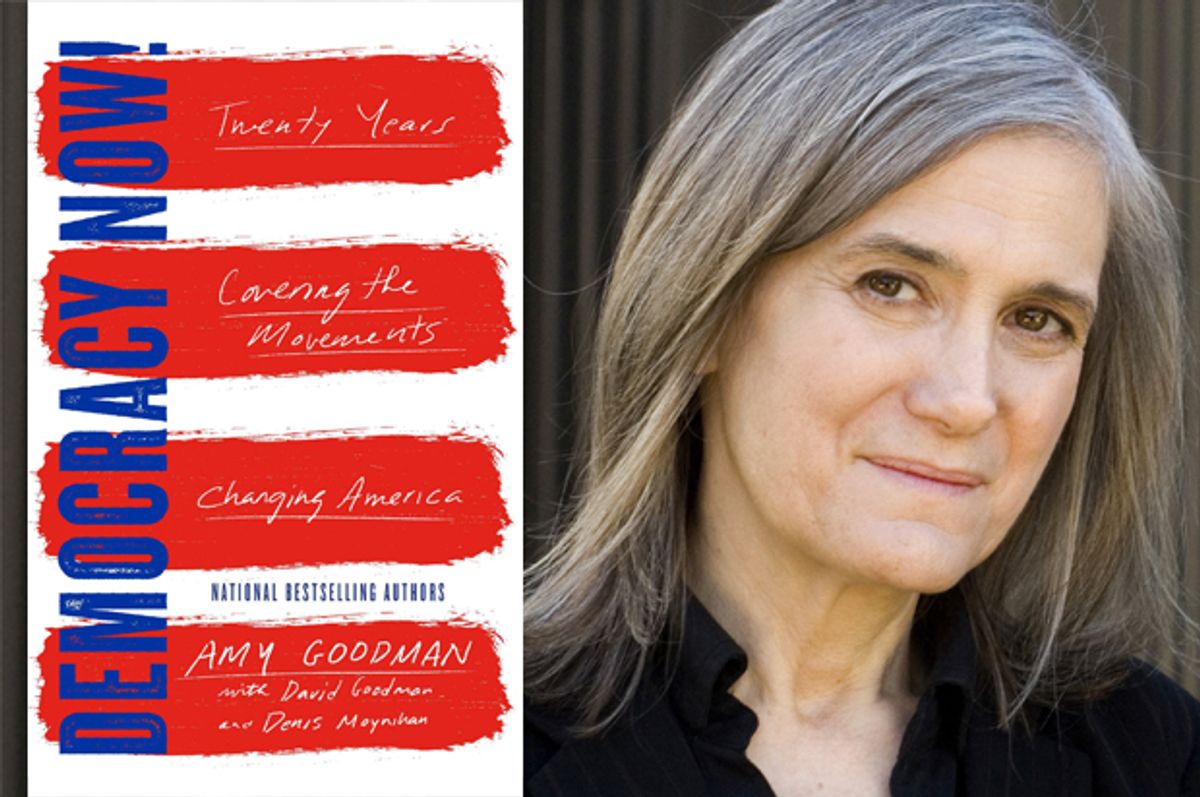 Amy Goodman isn't a mainstream media figure, but she's as beloved and well-known as any journalist in the country. Twenty years ago, before 9/11 and George W. Bush and Barack Obama, Goodman hosted what she believed was a one-time national election show for Pacifica radio network. Out of that was born “Democracy Now!,” a daily progressive news hour that airs on more than 1,400 stations across the nation.

Goodman is reflecting on the 20th anniversary of “Democracy Now!” in a new book titled “Democracy Now!: Twenty Years Covering the Movements Changing America,” which is co-authored by her longtime collaborators David Goodman and Denis Moynihan. The book is a sweeping look at both the origins of the show and its unique role in American political life. It's also a scathing critique of corporate media and its corrosive culture.

Goodman and her co-authors are currently on a North American speaking tour to mark the show's anniversary. Recently, Salon spoke with Goodman about the new book. Our conversation is below and has been edited for clarity and length.

Twenty years into Democracy Now’s tenure, what are you most proud of in terms of the show’s contribution to our discourse?

I think the fact that Democracy Now! has grown so exponentially into the largest public media collaboration in the country and on stations around the world on democracynow.org and on their public radio and television stations. I think that it shows a hunger for independent voices that is especially important now. Even with all the hundreds of channels there are, what matters is the handful of media moguls and we need independent media so that you can get a true diversity of opinion and originality of thinking that Democracy Now! brings out.

You note in the introduction to your book that journalism is the only profession explicitly protected by the U.S. Constitution, precisely because the press is an indispensable check on power. But it often feels as though the media serves the power structure. How did that happen? And what can people do about it?

It definitely amplifies the power structure. It brings us this small circle of pundits on all of the networks who know so little about so much explaining the world to us and getting it so wrong. It acts as a conveyor belt for what the administration and the establishment says. That's not what the media is supposed to be doing in serving a democratic society. Yes, there's a reason why our profession is the only one explicitly protected by the U.S. Constitution, because we're supposed to be the check and balance on power. That's an awesome responsibility. So when a president, for example, alleges weapons of mass destruction, it is incumbent on the media to challenge that, to question that, because then the U.S., as it did over a decade ago, goes to war in the most serious decision a country can make and it is based on a false premise. Instead, what happens with our media is they kind of rally the wagons around the president in a time of war, when that's the time that the most questioning has to take place.

Many people believe the profit motive is anathema to an independent and socially responsible media – that it fundamentally perverts the incentive structure. Do you agree?

The media is the oxygen of a democracy. When it simply acts as a PR machine for those in power, this all has to be challenged. It's why we have to build independent media and challenge the corporate media, because, in fact, they're using the public airwaves, which are a national treasure, and they have a responsibility not simply to echo the most powerful in society. Just look at the imbalances in society today. You have 62 or 63 of the wealthiest people in the world, two-thirds of them in the United States, owning more wealth than 3.5 billion people. That's half the world's population. It has to be challenged and changed, and we need a media that is a part of that challenge.

We started in 1996 on only about eight or nine community radio stations, and we're now broadcasting on over 1,400—public access TV, PBS stations, NPR stations, community and college radio stations, at democracynow.org broadcasting throughout the United States and all over the world. In Sweden we're on radio and television many times a day, in Japan and South Africa, in Latin America we translate our headlines into Spanish. Interestingly, we have many documentarians who come from around the world to do pieces on Democracy Now! — we're based in New York Cit y—because in many countries, they know corporate media, they know government media, but they haven't heard of independent media and they want to look at what this model is.

Today so many people have so much access to information and yet the populace remains hopelessly misinformed. Do you attribute that to a Balkanized profit-driven media or to some other instrument of manipulation?

I think we need media that is open. I think people have to break out of their silos. One other thing is we have to ensure that the internet remains open and free. There is a great push, because it is so invaluable, to privatize the internet, the place where all of us can get so much information that we have to double- and triple-check everything you see there. It is a great equalizer. Corporations have been globalizing for many decades. For everyday people, the way we communicate globally is through the internet. Telecoms and video companies want to take the internet private, and we have to fight for it to remain open.

That's also a critical part of opening up the flow of information. People should refer to many different sources when they want to get real information. I think the media can be a bridge between people, not silo people into only one way of thinking. I've always felt that the media can be the biggest force for peace on earth. Instead, all too often, it's wielded as a weapon of war. How can it be a force for peace? Providing a forum for people to speak for themselves so that when you hear an Israeli grandmother or Palestinian child or an aunt in Iraq or an uncle in Afghanistan, you begin to understand where they're coming from. I didn't say agree. How often to we agree with our family members even? But you begin to find some kind of common ground when you hear someone describing their own experience. It breaks down barriers that fuel hate groups. That's why the media has a huge task. And that is that we can familiarize ourselves with people who are very different than ourselves without wanting to destroy them.

Are you optimistic about the future of journalism in this country? So long as ratings and clicks are the driving force, is there any hope that the press will prize education over stupefaction?

Yes, I am optimistic because of the movements there are to cover in this country. These movements have been phenomenal from The Black Lives Matter movement to the Immigrant’s Rights movement; the most vulnerable people of our country could be deported at any moment, especially young people who are undocumented. And there they’ve been sitting in….President Obama’s reelection campaign offices over the years, congressional offices, demanding they be protected and their families be protected. I can’t think of anything more brave than this. There are the gay and lesbian activists, the LGBT movement, fighting for marriage equality and well beyond that for equality for everyone, whatever their gender identification.

Now there are a lot of bills that are being put in place, from Mississippi to North Carolina, and there’s a movement of people around this country who are also saying “no” to that repressive legislation, not only people and movements, but corporations are saying “we won’t do business with a state of hate.” In the peace movement in this country, soldiers are turning and saying “we shouldn’t be at war.” The environmental movement and all it has pushed for in demanding that we recognize that we’re destroying the planet. We have to do something about it. Even though the Koch brothers pour in millions of dollars to obfuscate basic facts about human-induced climate change, through dark money, setting up think-thanks, what many call think-thanks, to obfuscate the issue. And still people all over this country are getting the message “we’ve got to do something about the climate.” Even the Pentagon acknowledges climate change will be the issue of the 21st century that threatens national security the most. The issue for example, of climate refugees, people fleeing countries that are hardest hit by climate change induced weather and it is so important we take these issues seriously.

There are so many movements that are. The Black Lives Matter movement interrupting presidential campaigns to raise very serious questions, holding candidates accountable. I think there’s a great deal to be excited about, to be hopeful for.

What is the future of Democracy Now? What do you expect the show to look like in 10, 20 years?

I hope that we continue to expand, which I think gives people hope when they hear people on the ground trying to solve issues not those typical pundits you get on the networks. I hope the 1400 stations continue at the pace it is, a station a week picking us up somewhere in the world. Again I think the media can be the greatest force for peace on earth, but we got to be out there, we got to be covering the movements; the people, the events that are shaping this country. And making an enormous difference, so I hope we’re just continuing, and continuing to grow.