Which American dream will win?: Donald Trump as existential hero and the ugliness lurking in the "dream life of our nation" 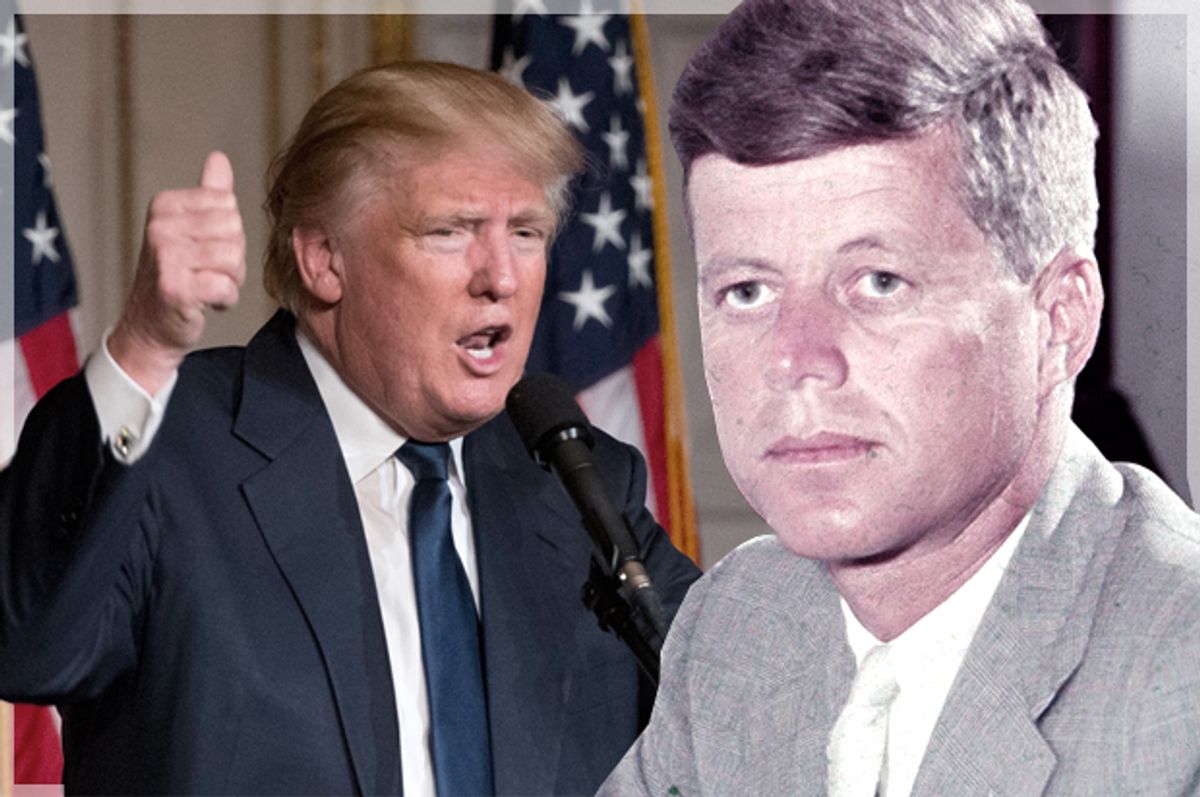 The President of the United States plays a wide range of roles on the single stage of national leadership. More than a policymaker, commander, and executive, the President, for better and worse, is an emotional director for the country’s culture. The impact a President makes on the nation’s laws and politics is significant, but it is often a small dent in comparison to the crater of cultural influence.

In addition to the empowerment of specific constituencies, Presidents also – through use of language, prioritization of ideas, and temperament – push American culture until it tilts in one direction. George W. Bush enabled religious fanatics and nationalists to feel great pride in their ignorance and zealotry, just as it is no coincidence that the cultural left ascended to new prominence under the Presidency of Barack Obama. Obama did nothing to directly encourage practitioners of identity politics. In fact, he has often attempted to discourage them, but his mere presence in the most powerful position in American government, sent a signal of opportunity to people concerned, with good reason or not, about diversity, multiculturalism, and inclusion. The personality and style of Obama also demonstrates the limits to cultural influence. Despite keeping the calm demeanor of a Buddhist librarian throughout the various crises and conflicts of his tenure as President, Americans continue to have anxiety attacks over nearly every inconvenience; operating under the belief that the world is forever teetering on the edge of ruin, and demonstrating that they do not possess the strength and courage of their President.

There are moments throughout history, however, when Presidents either elevate the populace, or pander and placate them as they crawl through the bacterial mud of paranoia, arrogance, and dysfunction. When President Roosevelt declared during the lows of the Great Depression that Americans had nothing to fear but fear itself, he was not only making an argument for his policies, but was acting as a cultural leader. President Carter tried, but failed to show Americans that an alternative to reckless consumption exists in his “Crises of Confidence” speech, while his successor, Ronald Reagan, essentially sent the message that Americans are correct in their assumption that the world is their penny arcade.

One of the first writers to observe the cultural impact and influence of the Presidency was Norman Mailer. Mailer maintained an ability to register the emotional and psychological pulse of America, and his diagnostic work, in many ways, began with the now seminal 1960 essay, “Superman Comes to the Supermarket.”

Just recently reissued as a photo-essay book by Taschen Press, the robust argument for John F. Kennedy – then a candidate for the White House – makes not a political case, but a cultural one for his election.

Mailer writes that Kennedy had a “good and sound liberal record,” but the real reason to treat his political emergence with excitement is that he “has a patina of that other life, the second American life, the long electric night with the fires of neon leading down the highway to the murmur of jazz.”

“Since the First World War,” Mailer explains with the eye of the philosopher and poet pulled into the visionary glance of one literary artist, “Americans have been leading a double life, and our history has moved on two rivers, one visible, the other underground; there has been the history of politics, which is concrete, factual, practical, and unbelievably dull if not for the consequences of the actions of some of these men; and there is a subterranean river of untapped, ferocious, lonely and romantic desires, that concentration of ecstasy and violence which is the dream life of the nation.”

Because Kennedy, with his Hollywood looks, his sexual vitality, his charisma, and his high level wit, offered illustration and assertion of the underground, second America life, he had the potential to become an “existential hero,” and America, according to Mailer, is a nation that needs heroes. The stiff and stale 1950s opened up the antiseptic space for Dwight Eisenhower to act as hero, but he was a hero for that large number of Americans who, in the words of Mailer, “were most proud of their lack of imagination.”

By electing Kennedy as national leader – with all that word implies – America could make a turn from the “tasteless, sexless, odorless sanctity in architecture, manners, modes, and styles,” and become more “extraordinary and adventurous.”

Americans did elect John Kennedy as President, and although his administration met a tragic ending with an assassin’s bullet, Mailer proved prescient when not long after Kennedy’s inauguration, the sexual revolution started. In an odd irony, Mailer was one of the most vocal critics of women’s liberation, which was the engine of the vehicular turn Mailer hoped would happen.

The danger of the current campaign for the Presidency, as Mailer’s work reminds readers, is not merely political or financial. It is cultural.

Donald Trump, in the eyes of many voters ranging from uninformed to mentally disturbed, appears like an existential hero. Should he pull off the increasingly unlikely nightmare of becoming President, he would multiply and intensify his already repugnant and destructive cultural movement. It is a movement that empowers many of the bigots who were once shamed into silence by decades of social and political progress. Trump as President would notify every antisocial and anti-intellectual American that their time to speak ignorantly, act cruelly, and threaten the civility and decency of American diversity has arrived. The hate and violence at his rallies offer a horrific preview into the cultural transformation that might occur if Trump were to become the country’s character and cultural leader.

Ted Cruz would likely arrest America’s development, and cause it to regress into the immaturity of the Bush years. Extremists with dreams of theocracy in their heads would feel emboldened to further push their agenda of corrupting American schools, stunting American sexuality, and damaging American women onto a nation steadily becoming less religious.

President Obama – an intelligent and eloquent President – should have had the cultural effect of encouraging more intellectual engagement and achievement in American life, but the odds against him were too overwhelming. He was a one-armed man paddling against the waves of a tropical storm.