Bernie Sanders must accept that Pope Francis isn't a friend to the left: The pontiff can't be a true humanitarian with his anti-woman and anti-LGBT views

Despite his position on poverty, Pope Francis denies the basic rights and dignity of more than half the world 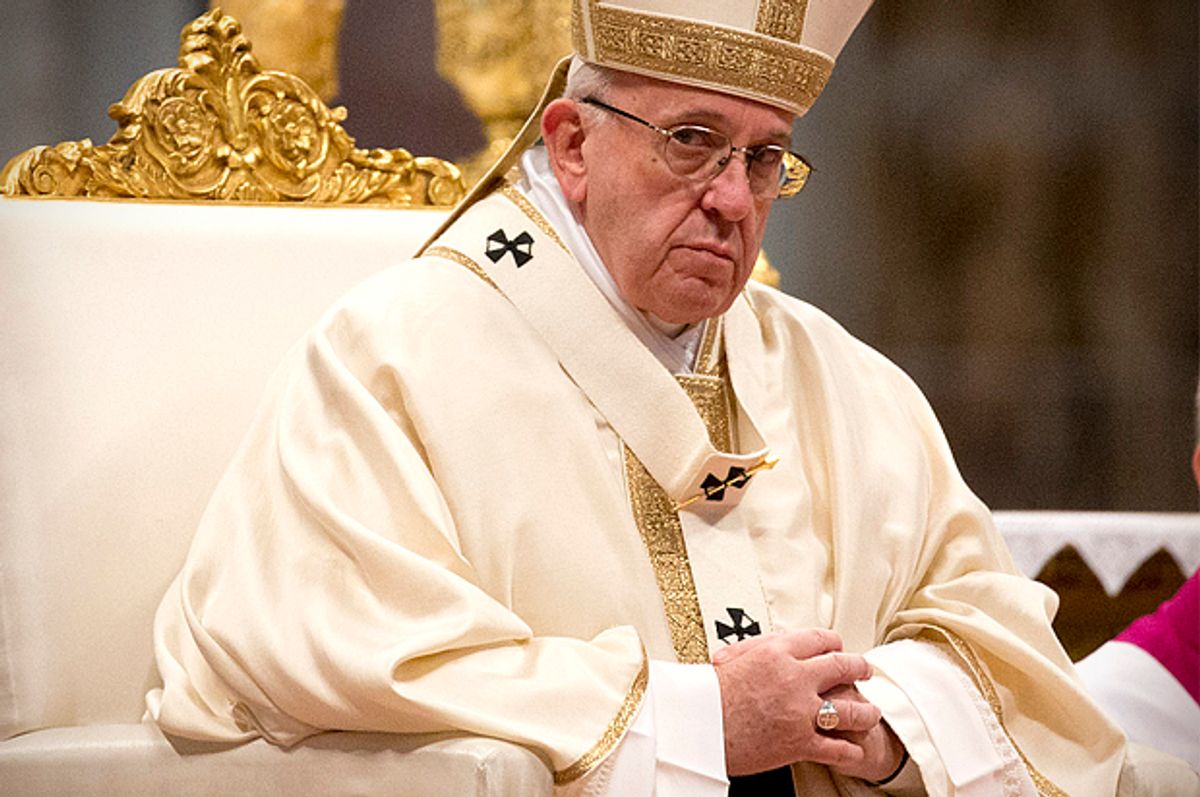 In an already weird election season, things have gotten even stranger as Bernie Sanders vies heavily and openly for Pope Francis to meet with him. Sanders admires the pope so much that he is leaving the campaign trail for a couple of days, something even some allies question the wisdom of, to speak at the Vatican and, he hopes, get a chance to meet Francis and (of course), get a picture with him.

"I believe that the pope has been an inspirational figure in raising public consciousness about the kind of income and wealth inequality we are seeing all over this world," Sanders told The Washington Post, explaining his decision.

This decision has raised controversy, with Clinton supporters noting that the history of the Catholic church getting involved in elections where there was what you might call concern that women might secure powerful leadership positions, something expressly forbidden within the church. But both critics and supporters of Sanders openly courting the Vatican seem to believe that it's a good move for him politically, that Pope will cast a glow on Sanders and charm more voters to his side.

If so, that's a real shame, because it shows yet again that liberals and progressives really need to get it into their heads: The Pope is not your friend. And he's not really a friend to the poor, because half of them (probably more) are women.

This pope is admittedly less awful than his predecessor, Pope Benedict XVI, but that's like saying a kick in the knees isn't as bad as a kick in the crotch. Ideally, no one should be kicking anyone at all, and progressives really shouldn't apologize for holding that ground.

And Pope Francis likes to kick a lot of innocent people. Earlier this month, Pope Francis released a document addressing the church's views on "family" (read: policing sexual identity and consensual behavior).  This got a friendly reception in the press, with writers falling all over themselves to congratulate the church for being mildly less evil to the vast majority of human beings around the world that cannot and will not live up to the church's rigid and inhumane views on people's romantic and sexual lives.

I'm not so generous. The document may have been marginally better than previous edicts on the issue of divorce, but overall, it was a nasty piece of work, stunning in its cruelty to women and LGBT people.

For one thing, it was snidely cruel not just to trans people, but singling young trans people out for special abuse. As the Christian Post (which loved this cruelty) noted, the pope "asserted that schools need to teach children to 'accept' their natural bodies as they were 'created,' and to appreciate their bodies as 'male and female.'"

He did try to frame this anti-trans view in liberal terms, arguing that there are overly rigid gender roles that can teach kids "that it is not really masculine to cultivate art or dance, or not very feminine to exercise leadership."

Sounds progressive, but it's really not, as the implication here that people aren't really transgender, as if some boy is sitting around saying, "I just want to dance, but it's only for girls, so I have to be a girl, I guess."

Propping up the myth that trans people are just confused is incredibly dangerous, as this myth is used to justify denying trans people medical care or even access to the bathroom that corresponds with their gender. Trans people don't need a lecture on how they just need to learn to live as a gender they were assigned at birth. They need health care and human rights, and the Pope is clearly working against them by pushing tired myths instead.

The pope denounced gay marriage and pushed anti-trans myths, but he also took the time to demonize the sexuality of nearly every straight person alive, as well.

"Frequently, sex education deals primarily with ‘protection’ through the practice of ‘safe sex,'" he wrote. "Such expressions convey a negative attitude towards the natural procreative finality of sexuality, as if an eventual child were an enemy to be protected against. This way of thinking promotes narcissism and aggressivity in place of acceptance."

People who are taught about contraception, he added, "end up being blithely encouraged to use other persons as a means of fulfilling their needs or limitations."

That's right: The pope equates using contraception (something 99% of sexually active women in the United States do at some point) with being a cold, exploitative user.

Oh sure, the pope does the same thing to contraception users that he does to trans people by wrapping this dehumanizing argument in liberal-sounding language. He's not trying to hurt you, ladies! He's just trying to protect you against those exploitative men who want to have sex without making babies. It's for your own good!

In reality, however, it's the anti-contraception edict that is exploitative and dehumanizing of women.(As someone who isn't a celibate priest but a sexually active woman, I can safely say that taking an interest in contraception is more a sign that a man cares, and showing indifference on the issue is usually a red flag that he's a user.) Being deprived of control over your own body degrades women and treats them not like full, dignified human beings, but brood mares.

It also completely undermines the pope's claim to be a champion of the poor, since unintended childbearing is particularly hard on poor people. Women who have access to reliable contraception endure less poverty. Families who are trying to get out of poverty struggle more when they keep having to pay for medical care and food for more children than they want. This is not just backed up by research, but really should be common sense.

The church's insistence that women be forced to choose between celibacy or having one child after another until their bodies give out is not just some esoteric theological stance that has no impact on the real world. It does real, material harm every day.

Take the story of Yolanda Naz, as reported by Kenneth Weiss of the LA Times in 2012. Naz and her husband live in Manila, in the Philippines, and wanted to limit their family to three children. But, under pressure from the Catholic church, the city cut off birth control at the public clinics, and Naz went on to have eight children, five more than she wanted. When Weiss met Naz, her family was half-starved and broke and she worried all the time that the lack of nutrition would kill her children.

"At 36, she had more children than teeth, common for poor women after repeated pregnancies and breast-feeding," Weiss writes.

No one who actually cares about poor people would cavalierly write off the suffering of people like Naz with facile arguments that it would somehow be worse if she and her husband could have sex without non-stop pregnancies. But that's exactly what Pope Francis did with his latest anti-contraception writings.

None of which is to say that Sanders shouldn't meet with the pope or speak at the Vatican. Politics is a world where you sometimes have to deal with unsavory characters because they are in positions of power and influence.

But when you hold the pope out as some kind of great liberal icon despite his hostility to women and LGBT people, it sends the message that the needs of more than half the world for basic dignity and respect, much less health and safety, is a minor and boutique issue. But it's not. More than that, securing the human rights of more than half the world is crucial to fighting poverty and income inequality.