Donald Trump is a petulant baby: Yes, the primary system is rigged — in his favor

Trump is telling anyone who will listen that the GOP primary has been manipulated to oust him. Here's the truth 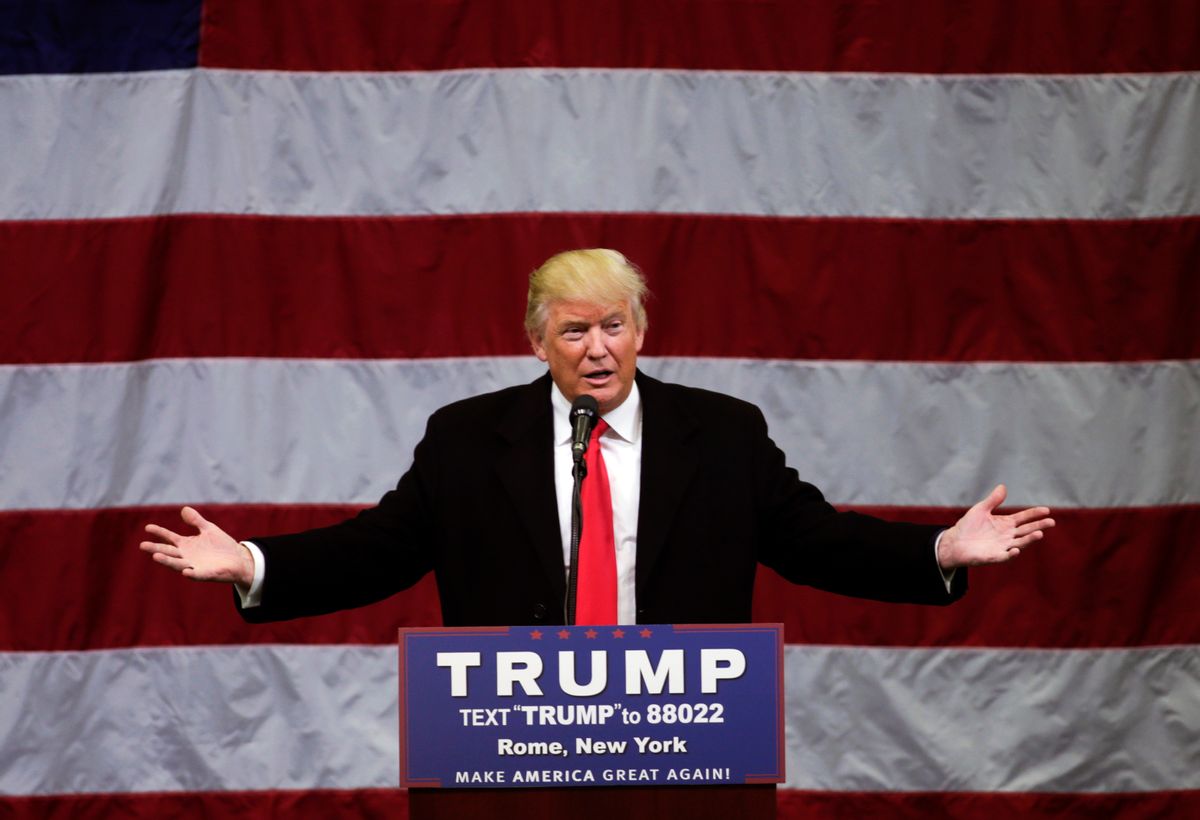 Donald Trump is a winner because he knows how to play the game better than anyone else, right? He's so good at the "art of the deal" that he always comes out ahead and the other side doesn't even know what hit them. In fact, they are so dazzled by his fabulousness that they just give him whatever he wants and beg for the opportunity to give more. That's just how good he is -- at least to hear him tell it. So why is he whining like child about the election being "rigged" and having tantrums over the unfairness of the system? Shouldn't he be able to simply renegotiate the rules in his favor? Isn't that how the world works?

It is true that the nominating systems of both parties are byzantine and obscure. Our electoral system in general is ridiculously convoluted. And now Trump's party is making it even worse with vote suppression tactics being enacted all over the country. But who doesn't know this by now? It was only 16 years ago that we had a disputed election and a great national debate about whether we even have a constitutional right to vote --- and the Supreme Court serenely told us that we do not. The party primary system doesn't even fall under any constitutional guidelines. It's considered a private matter decided by private organizations. If you don't like how they do things you can join the party and try to change it or start your own. And good luck with that. It's worked out so well in the past.

None of this is new, however. We have long had two national parties that operate in 50 states with 50 separate governments all of which handle elections their own way. We have caucuses and primaries and state conventions and delegate selection and it's all nuts.And believe it or not it's actually much more democratic than it used to be. The Democrats, for instance, have proportional delegates now which is much more fair than the old winner take all system. It draws out the primary for months and makes it a much more arduous campaign, but in the end a lot more Democrats have a say in the outcome than in the past.

The GOP primary process is admittedly much more complicated. But that Donald Trump made it all the way to April of the primary season as front runner for the presidential nomination without being aware of this says everything you need to know about his organizational acumen. It turns out that national politics isn't as simple as a branding deal with Macy's over ties and underwear. It isn't a Manhattan real estate negotiation either. But like so many wealthy men, he assumed that making all that money must make him a genius, so much so that he's capable of running the world by the seat of his pants.

Trump is not a genius. As this piece in the LA Times explains, he's getting outmaneuvered and outclassed by Ted Cruz at every turn:

Trump may have won the vote in Louisiana’s primary, but Cruz came out with an equal number of delegates when the election results got sifted through the state party procedures. Cruz has pulled off similar maneuvers in numerous states. In Colorado, where delegates are picked at congressional district caucuses, Cruz has claimed all the delegates. In Texas, where Trump thought he had picked up 48 of the state’s 155 delegates even though he lost to Cruz in the primary, the Austin American-Statesman reports that all 155 will be Cruz supporters. Yes, 48 of them will be required to vote for Trump for two nominating ballots at the Republican convention in Cleveland this July, but they are free to vote with Cruz on procedural rules and will go to Cruz if a third ballot comes around. Even in states where Trump came in first, including South Carolina, Florida, Georgia and Virginia, Cruz has gotten stealth delegates elected who will abandon the New York businessman for the Texas senator as quickly as they can legally do it.

In California, where the primary campaign will reach a grand climax on June 7, Trump now leads in polls, but he has to think about more than simply winning the statewide vote. Delegates are allocated to the winner in each congressional district. That means there are actually 53 distinct elections that will each choose three convention delegates. Winning the votes of the few Republicans in House Democratic Leader Nancy Pelosi’s liberal San Francisco district is as valuable as winning the votes of the many conservatives in the San Diego district of U.S. Rep. Duncan Hunter, the first member of Congress to endorse Trump.

Cruz has been organizing in the state for months. Trump just hired a staff. This doesn't mean Cruz will win, of course. But it does mean that Trump's not quite the dominating alpha wolf he claims to be.

In his second favorite book after the Bible, his own, "Art of the Deal," one of Trump's most important pieces of advice is to "know your market." And he is proud that he doesn't hire researchers or market analysts for that purpose and instead relies on his instincts. So in running for president he listened to "the shows" and had his minions report on what talk radio was saying, but he didn't bother to hire people who knew how the system worked until this month. He thought he could just hold big rallies and call in to the cable news programs and that would carry him. But he didn't bother to learn the most important market, which is delegates not rally attendees or TV ratings.

In fact, he's a much bigger loser at this stage than he knows. As Rich Lowry observed in this piece in Politico:

For all of Trump’s complaints, the nomination system was set up to favor the front-runner and get him over the top as soon as possible. It is a symptom of Trump’s weakness that, even as he romped through the first couple of months of the race and accumulated delegates out of proportion to his popular vote (about 45 percent of the delegates on 37 percent of the vote), he still might fall short of 1,237.

This is an extremely important point. The rules were rigged. But they were rigged to favor Donald Trump. For a man who is selling himself as the greatest deal maker the world has ever known, he's having an awfully hard time closing one that was set-up for him to win from the very beginning.

Still, there's plenty of life left in the Donald and he has some cards to play. It's unseemly that a man in his position would wring his hands about life being unfair, but he's been doing this from the beginning of the campaign. His earliest flap over Megyn Kelly was all about her asking him unfair questions. You may recall that when Chris Cuomo repeated a quote from Rich Lowry calling him a "fabulous whiner," he readily admitted to it:

"I think he's probably right. I am the most fabulous whiner. I do whine because I want to win. And I'm not happy if I'm not winning. And I am a whiner. And I'm a whiner and I keep whining and whining until I win. And I'm going to win for the country and I'm going to make our country great again."

There's a word for that. It's called a tantrum. It's something little children do to get their way. And it often works. It's worked for him so far.

Lowry thinks Trump is preparing to be a sore loser and burn what's left of the Republican Party in his wake as he flounces off in a huff if he isn't given the nomination. The big question is whether his followers would go with him. I suspect they would. Trump may not have any real analytical or organizational skill but if there's one "market" he understands it's the disaffected faction of white America that feels persecuted and marginalized. His crude, ill-mannered, "politically incorrect" campaign has given their victimization complexes a shot of adrenaline. And you know what happens when that rush wears off. Trump will be able to retreat to his golden palace to lick his wounds. All his followers will have to show for it will be that stupid red hat.