Hillary Clinton "goysplains" to Bernie Sanders in Passover article, accusing him of betraying his people by criticizing Israel 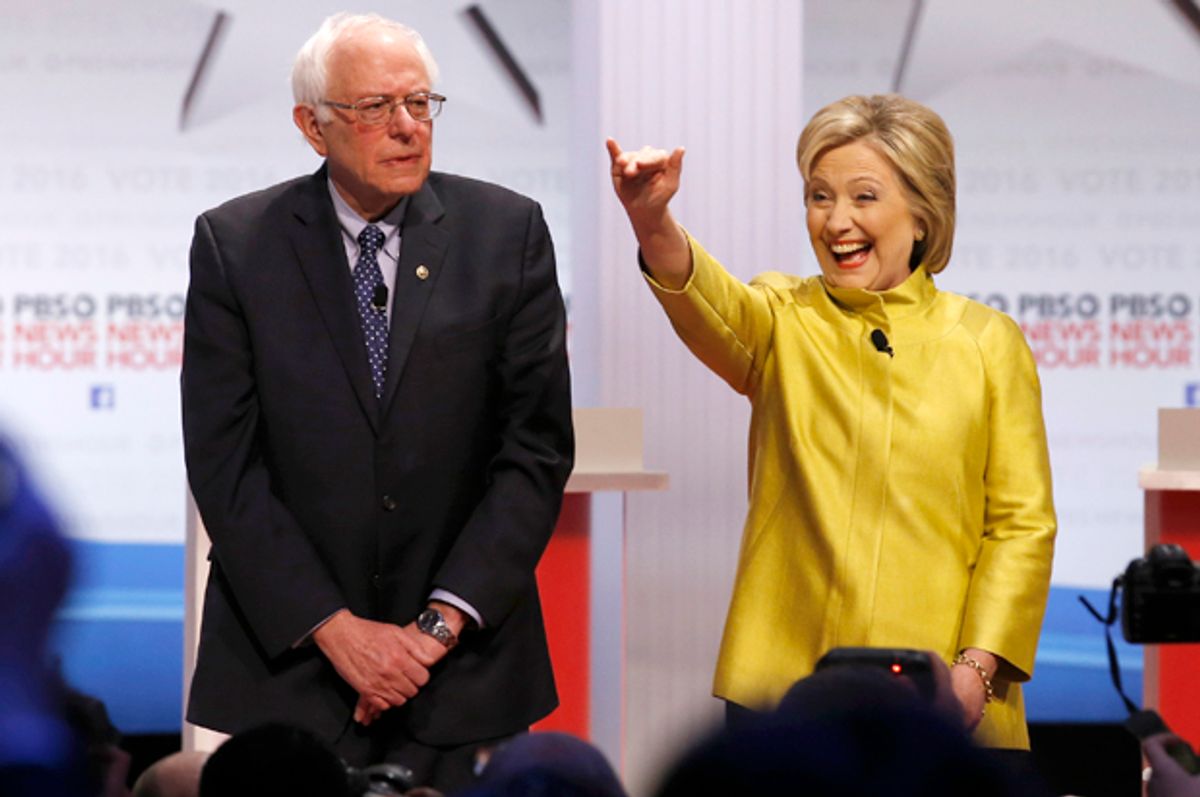 Hillary Clinton's supporters have frequently, and often dishonestly, accused Bernie Sanders and his supporters of "mansplaining."

Meanwhile, the presidential candidate herself published a blog post on the website The Times of Israel on Sunday night doing what can only be described as "goysplaining" — or, as a non-Jew, condescendingly accusing a Jew of betraying his own people for criticizing Israel.

In the article, titled "Fighting oppression, inequality and injustice on Passover," Clinton told the Biblical story of Exodus and stressed that lessons should be drawn from it for today.

With hawkish right-wing rhetoric, Clinton steadfastly defended the Israeli government. She conflated the Jewish religion with the state of Israel and condemned critics of the government as anti-Semitic.

"I’ve proudly stood with the State of Israel for my entire career, making sure it always has the resources it needs to maintain its qualitative military edge," Clinton wrote, bragging about her work to boost U.S. military funding for Israel.

"Protecting allies and partners like Israel is one of the most solemn duties of any Commander-in-Chief. Yet others in this race suggest we must remain 'neutral' in order to negotiate," Clinton added, in a jab at her opponent Bernie Sanders.

Clinton implied Sanders is being derelict in his duties as a Jew and betraying his own people by criticizing Israel and its crimes.

Sanders is the only Jewish politician who has ever come close to being U.S. president. He was raised in a largely Jewish neighborhood in Brooklyn, New York and has said he is "very proud to be Jewish." Sanders also had family members who were killed in the Holocaust.

Like Sanders, many Jewish Americans are increasingly critical of the Israeli government and its oppression of the Palestinians, who have lived under brutal, illegal Israeli military occupation for approximately five decades and face intense institutional discrimination inside Israel, as the U.S. State Department itself acknowledged in a recent report.

In recent weeks, Sanders has come under bitter attack from the pro-Israel right-wing for criticizing Israel's disproportionate attacks on Gaza and for pledging to be neutral on Israel-Palestine.

"Israel’s safety is simply non-negotiable," Clinton wrote. She belligerently added, "For the security of Israel and the world, we need America to remain a respected global leader, and be ready and able to block any international effort to isolate or attack Israel."

The Times of Israel, the website where Clinton published her article, has previously published blog posts by Israel supporters that openly called for "genocide" of Palestinians, although it has subsequently deleted them after facing backlash.

In her opinion piece, Clinton compared Boycott, Divestment and Sanctions, or BDS, to the Egyptian pharaoh who, according to the Biblical Exodus story, enslaved the Israelites.

BDS, which Clinton calls "alarming," is an international grassroots movement that uses peaceful economic means to pressure the Israeli government to abide by international law and respect Palestinian human rights.

Many Jewish activists support BDS, and some of the most prominent voices in support of the movement are Jewish. In her attacks on the nonviolent resistance movement, Clinton echoed common right-wing pro-Israel talking points.

Her opinion piece sounds very similar to speeches made by figures like Israel's hard-line right-wing Prime Minister Benjamin Netanyahu, whom Clinton has pledged multiple times to invite to the White House in her first month as president.

The bellicose rhetoric is similar to that of her hawkish speech at the 2016 policy conference of the American Israel Public Affairs Committee, or AIPAC, the most influential pro-Israel group.

Jewish critics also called out Clinton for basing her argument on the likely fictional Exodus story.

"I  didn’t grow up celebrating Pesach," Clinton acknowledged in the piece, using the Hebrew word for Passover, but she implored Jews "to keep telling its story."

The Bible's Book of Exodus tells the story of how the Israelites were enslaved in ancient Egypt and were denied the right to practice their religion. On Passover every year, Jews recall this story, commemorating how, under the leadership of the prophet Moses, they were freed from slavery.

As Jewish scholars have pointed out however, "there is no evidence whatsoever that the Jews were ever enslaved in Egypt." The Biblical Exodus story is likely fictitious.

The story may have religious and symbolic significance, but it is not based on historical evidence.

This did not stop Clinton from "goysplaining" the holiday and accusing prominent left-wing Jews like Bernie Sanders of betraying their own people.