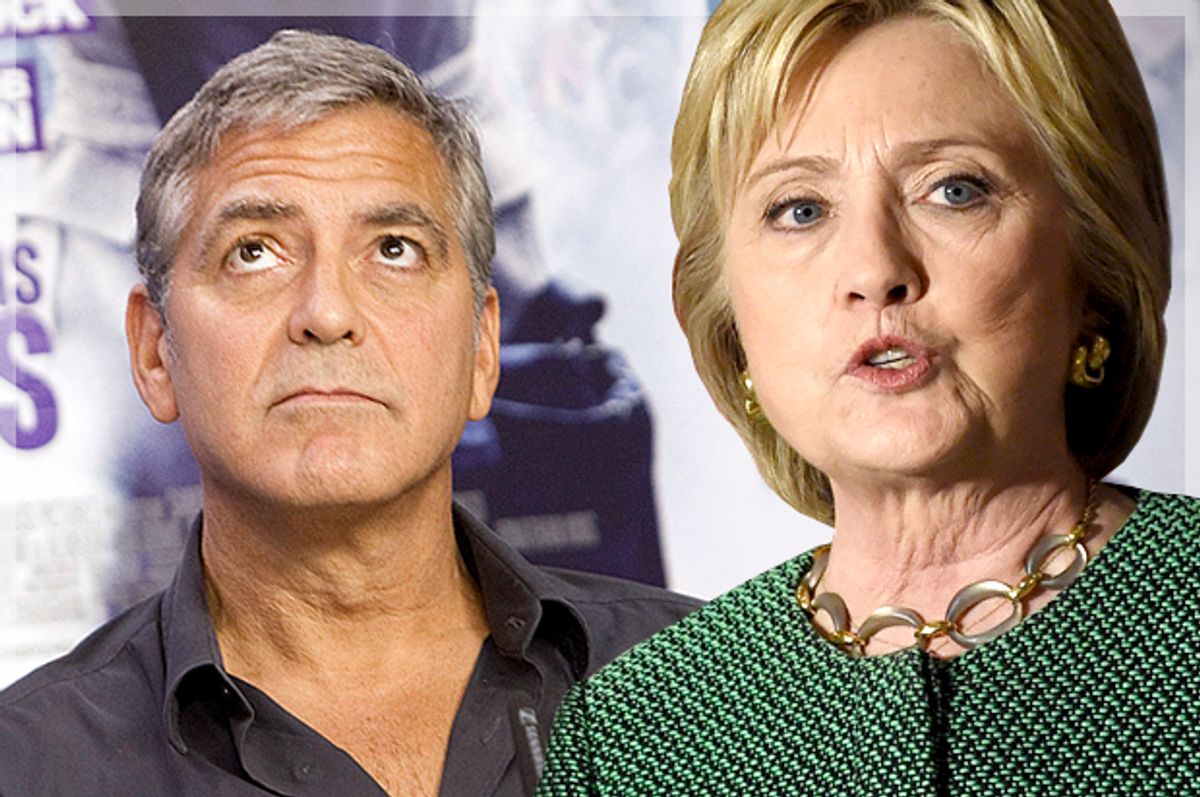 George Clooney is a tough guy to dislike. He stars in Coen brothers films. He has a well-earned reputation as a humanitarian. He has a jawline that could have been cut from marble by Michelangelo himself. He’s married to a woman who is by all accounts both brilliant and saintly. He’s built up enough goodwill over the years that I’m even willing to forgive (but regrettably unable to forget) the affront to cinema that was “Leatherheads.” How can you stay mad at a guy with Clooney's charm?

But George Clooney said something silly on Sunday, and he may not even have realized it.

Clooney co-hosted two big-money fundraisers for Hillary Clinton last weekend, at which donors paid up to $353,000 per couple to mingle with liberal nobility and snack on what presumably must have been some truly divine hors d’oeuvres. He appeared on NBC’s “Meet the Press” on Sunday to discuss his efforts, and said all the things campaign finance reformers wanted to hear:

“I think it's an obscene amount of money. I think that, you know, we had some protesters last night when we pulled up in San Francisco and they're right to protest. They're absolutely right. It is an obscene amount of money. The Sanders campaign when they talk about it is absolutely right. It's ridiculous that we should have this kind of money in politics.”

Right on, George. Maybe Hillary Clinton isn’t the first person I’d rely on to fix a corrupt system she’s played like a virtuoso for years, but fair enough. Campaign finance is perhaps the single biggest problem plaguing our democracy, so good on Clooney for calling it out. Things only went a bit off the rails when he continued:

“I think what’s important and what I think the Clinton campaign has not been very good at explaining is this and this is the truth: the overwhelming amount of money that we’re raising, and it is a lot, but the overwhelming amount of the money that we’re raising is not going to Hillary to run for president, it’s going to the down ticket. It’s going to the congressmen and senators to try to take back Congress. And the reason that’s important and the reason it’s important to me is because we need, I’m a Democrat so if you’re a Republican, you’re going to disagree, but we need to take the senate back. Because we need to confirm the Supreme Court justice because that fifth vote on the Supreme Court can overturn Citizens United and get this obscene, ridiculous amount of money out so I never have to do a fundraiser again. And that’s why I’m doing it.” [Emphasis mine]

What he said sounds reasonable at first glance. No matter how distasteful some liberals find the prospect of a Hillary Clinton presidency, it pales in comparison to their horror at the thought of Republicans strengthening their hold on state legislatures and enacting an anti-abortion, anti-LGBT, anti-environment agenda.

There’s just one problem with Clooney’s statement. The Clinton campaign “has not been very good at explaining” how it’s helping out down-ticket Democrats because it actually isn’t all that concerned with funding them.

Let’s give Clooney the benefit of the doubt and assume he must not have read recent reports about the Hillary Victory Fund, a so-called joint fundraising venture that smells something like a campaign money laundering scheme. Politico explains:

The fund comprises Clinton’s presidential campaign committee, as well as the Democratic National Committee and 32 state party committees. As a result, it can accept checks as large as $358,000 per person — a total determined by the maximum donation to each of its component committees ($5,400 to the Clinton campaign, $33,400 to the DNC and $10,000 to each of the state parties). […]

And the Hillary Victory Fund also spent $6.7 million on online ads that mostly looked like Clinton campaign ads, as well as $5.5 million on direct marketing.

The Hillary Victory Fund raised $33 million in the first quarter of 2016, yet just $2 million made it back to state parties. But hey, $2 million is better than nothing, right? Not so fast. The Washington Post reports:

“So far, the state parties have served only as a pass-through for their share of the funds. Campaign finance records show that nearly $2 million in donations to the fund initially routed last year to individual state party accounts was immediately transferred to the DNC, which is laboring to pay off millions of dollars in debt.”

The state parties end up with nothing, and can’t even go back to those big donors for money they can actually use because the donors have already maxed out. The state parties somehow end up weaker as a result of Clinton’s patronage. Contributions that were supposed to help those down ticket candidates Clooney cares about so much end up funding Clinton or paying off the DNC’s debt.

“Bernie 2016 is particularly concerned that these extremely large-dollar individual contributions have been used by [Hillary Victory Fund] to pay for more than $7.8 million in direct mail efforts and over $8.6 million in online advertising, both of which appear to benefit only [Hillary For America, Clinton’s official campaign] by generating low-dollar contributions that flow only to [Hillary For America], rather than to the DNC or any of the participating state parties.”

Unfortunately for Bernie, his letter is unlikely to do much good —it was addressed to DNC Chair Debbie Wasserman-Schultz, who has laid her finger on the scale for Clinton at every opportunity in this campaign.

Adding insult to injury, the Clinton campaign attacked Sanders for not raising money for state Democratic parties at the same time the Hillary Victory Fund was busy funneling cash away from state parties.

The Hillary Victory Fund is a classic example of The Clinton Doctrine in exercise: Whatever the situation, take such action as will most directly benefit the Clintons.

Does Hillary Clinton really sound like someone who’s concerned about fixing campaign finance or helping down ballot candidates, George Clooney?