No end to the horror: Afghan casualties and displacement at record high while Europe deports refugees and U.S. war drags on

Nearly 2,000 Afghan civilians killed or wounded in first quarter of 2016, while refugees fleeing violence sent back 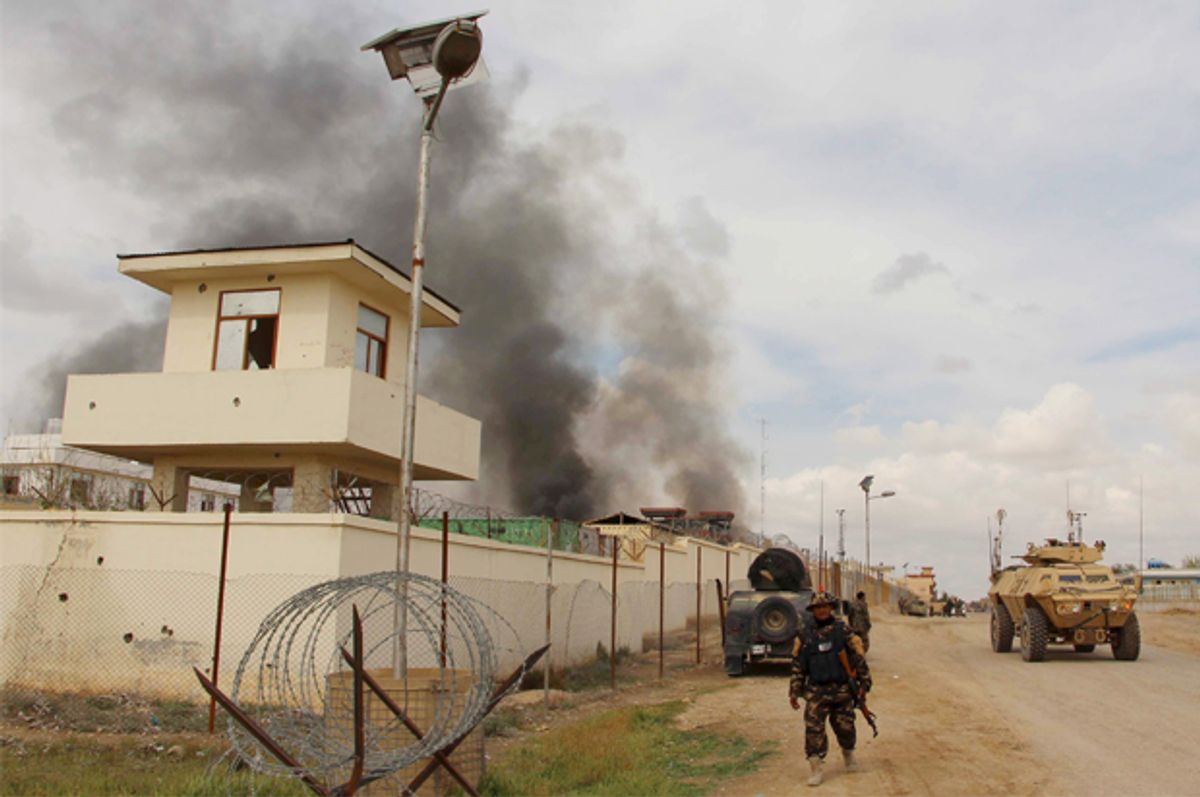 Smoke billows from a building after a Taliban attack in the Gereshk district of Helmand province, Afghanistan March 9, 2016. (Reuters/Abdul Malik)
--

After Vietnam, the war in Afghanistan is the longest conventional war in U.S. history.

This October, the war will enter its 15th year. Yet there is infrequent reporting on it anymore in much of the U.S. media, and it is rarely mentioned by American politicians.

Nearly 2,000 Afghan civilians were killed or wounded in the first three months of this year, according to a report by the United Nations Assistance Mission in Afghanistan.

The U.N. mission says 600 civilians were killed in this period, along with another 1,343 who were wounded.

Civilian casualties increased by 2 percent compared to the same period in 2015. Civilian deaths dropped by 13 percent, but the number of people wounded grew by 11 percent.

Children are paying a particularly large price, the U.N. report indicated with "extreme concern." The number of child casualties increased by 29 percent, with 161 killed and 449 injured.

“In the first quarter of 2016, almost one-third of civilian casualties were children,” said Danielle Bell, human rights director at the U.N. mission.

“If the fighting persists near schools, playgrounds, homes and clinics, and parties continue to use explosive weapons in those areas – particularly mortars and IED tactics, these appalling numbers of children killed and maimed will continue.”

A graph released by the U.N. Assistance Mission in Afghanistan illustrates how casualties have steadily increased in the past few years.

Actions by anti-government elements, particularly the Taliban, caused at least 60 percent of casualties in the first quarter of 2016, according to the report.

U.S.-backed pro-government forces were responsible for 19 percent of civilian casualties, but the U.N. mission warned that this is a 70 percent increase compared to the same period in 2015.

It also noted "with particular concern an increase in civilian casualties from aerial operations by both the Afghan Air Force and international military forces," namely NATO.

The Taliban emerged out of the aftermath of the Afghanistan war in the 1980s, in which the U.S. and its allies Pakistan and Saudi Arabia trained, armed and funded extremist Islamist militants in order to fight the Soviet Union.

In September, the U.N. noted that the extremist group had spread through more of Afghanistan than at any point since 2001. A surge of further violence began after the U.N. data was collected.

U.N. security officials rated the threat level in roughly half of Afghanistan’s administrative districts as either “high” or “extreme.” 27 of the country’s 34 provinces had some districts with these threat levels. This was more than at any time since the war began in 2001.

Former Afghan parliamentarian and human rights activist Malalai Joya explained in a 2013 interview that, in her country, “imperialism and fundamentalism has joined hands.”

The “consequences of the 12 years of occupation of U.S. and NATO, unfortunately, was more bloodshed, crimes, women rights, human rights violations, looting of our resource, and changing of our country into mafia state,” she said three years ago.

“During these 12 bloody years, tens of thousands of innocent civilians have been killed by occupation forces and terrorist groups,” Joya added.

The U.N. has also previously reported that the violence in 2015 was the worst since it began tracking the casualties.

Last year, 3,545 Afghan civilians were killed and another 7,457 were injured.

And these figures do not “reflect the real horror of the phenomenon we are talking about,” Nicholas Haysom, the U.N.’s secretary general’s special representative for Afghanistan, said at the time.

Refugees fleeing this violence have faced extreme discrimination. Western countries backing the war in Afghanistan have demonstrated little concern for the civilians who suffer from it.

A new deal by the European Union is sending Afghan refugees to Turkey, where they may not be safe. Legal experts say this plan is illegal, not to mention immoral.

The U.K. deported 2,018 unaccompanied children back to Afghanistan from 2007 to 2015. Human rights officials say this policy is also illegal.

In the U.S., the war has sucked up billions upon billions of tax dollars. Numerous reports estimate that the U.S. war in Afghanistan has cost at least $1 trillion dollars.

Among the promises President Obama was elected on was ending the war, yet his administration has extended it twice.

Almost 15 years later, while many Americans have forgotten about the U.S. war, Afghan civilians continue to suffer.