Sanders' terrible night: His nomination hopes are virtually dead, but he must keep his message alive or the amazing movement he started will be in vain 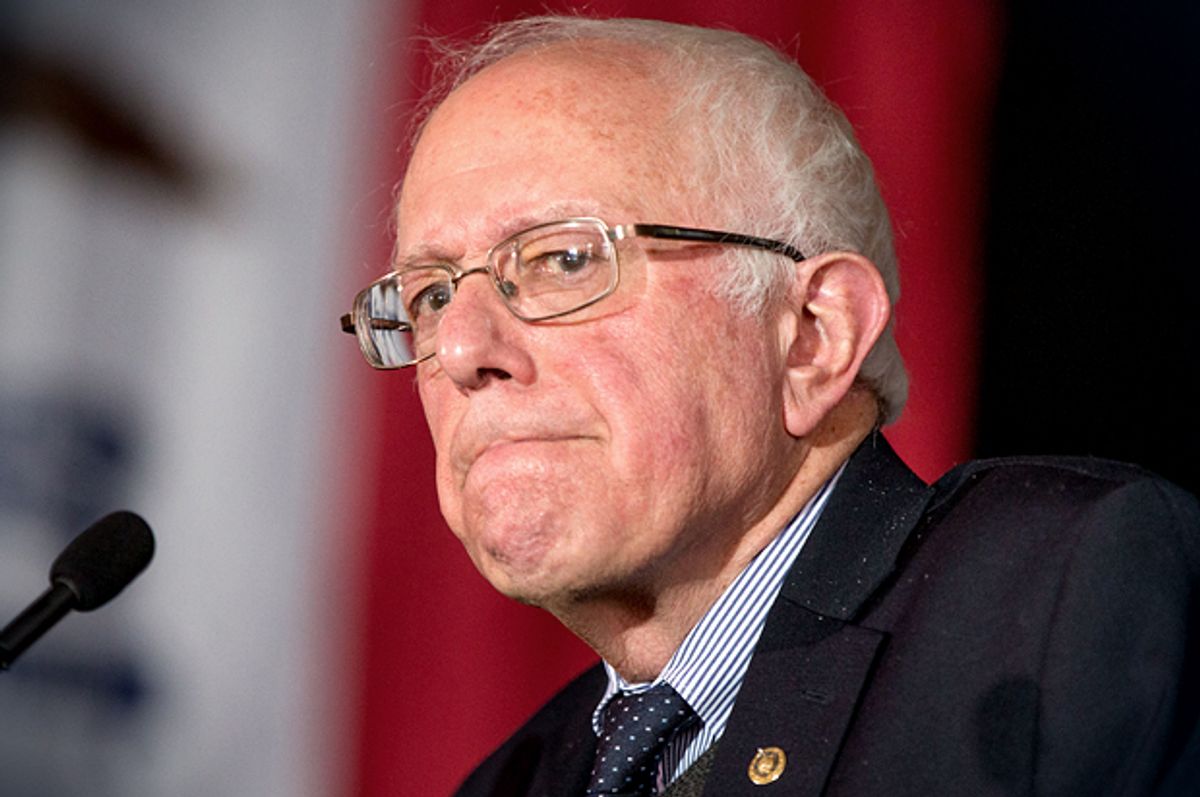 You don't have to like reality to accept it. Hillary Clinton will be the Democratic nominee. As an editorialist, I've been transparent about my support for Bernie Sanders. I believe Sanders better represents the progressive platform, and I'm convinced he's the best candidate on offer. But he's not going to earn the nomination.

The writing has been plastered on the wall for weeks, but Tuesday night was a chance for Sanders to breathe life into his waning campaign. Depending on who you asked, Clinton had something like a 200 pledged delegate lead heading into New York, a state in which 291 delegates were at stake.

As I wrote Tuesday, there were no “moral victories” to be had in New York. Holding Clinton to a single digit victory or even narrowly beating her wasn't enough for Sanders – the delegate gap is too wide. He needed to win and win big. Instead, Sanders was crushed last night. He was beaten badly in the state in which he was born and to which he still has ties. And he was beaten despite having outspent his opponent 2-to-1. Whatever problems or irregularities occurred with New York's voting process, they almost certainly don't account for the near 20 point loss.

This was a terrible night for Sanders by any measure.

Sanders now has a choice to make: What kind of campaign does he want to run? To be clear: Sanders has earned the right to do and say whatever he wants. But how he chooses to deliver his message matters a great deal moving forward. There will be those who say Sanders should stop challenging Clinton, that he should avoid any critiques that might damage her in a general election. That's ridiculous, frankly.

Sanders owes it to his campaign and his supporters to continue speaking about the issues that matter. If that means forcing to Clinton to defend her record or, more importantly, to adopt more progressive positions, then that's a good thing. Should Clinton become the nominee, her views ought to reflect the base as much as possible. But the choice Sanders has to make concerns how to handle defeat. It's not about whether he goes positive or negative – that varies according to perspective. It's about the final impression he leaves on the party, whether he ends in defiant indignation or as a transformative figure whose ideas linger long after his campaign.

Ezra Klein pointed up a tension emerging between the arguments the Sanders team has been making recently. On the one hand, Sanders has complained about New York's closed primary effectively disenfranchising millions of independents. That's a fair point, particularly in light of Sanders's populist campaign. Last night, however, Sanders's campaign manager, Jeff Weaver, suggested the campaign is prepared to win the election at the convention by persuading superdelegates to abandon Clinton, despite having lost at the voting booth.

First, that's a bad idea, and it won't work. The superdelegates would be reluctant to switch sides even if Sanders won more pledged delegates. It's preposterous to assume they'd dump Clinton if she actually won the popular vote. More significantly, taking this approach undercuts Sanders's authenticity. Klein writes:

“It is, however, a bit unseemly for Sanders to blast New York's primary for barring independent voters only to have his campaign manager go out and say they're explicitly planning to use superdelegates to overturn the will of the voters...Imagine if it was Sanders who was leading in pledged delegates and Clinton who was suggesting New York's primary results weren't legitimate and her campaign would use superdelegates to win even if they lost the primaries. Sanders's voters would be furious, and rightly so.”

Eventually, the Sanders campaign will have to reckon with reality. They will – and should – campaign right up until the convention. But this kind of strategy won't work and only damages Sanders's reputation.

How Sanders closes this campaign also matters because, as Vox's Matthew Yglesias observed, “His brand of politics is the future of the Democratic Party.” A new Reuters poll has Sanders leading Clinton 56-38 among voters below the age of 40. Sanders's FDR-style politics has struck a nerve, and in many ways is the best thing that could've happened to the Democratic Party. These voters will demand that future candidates sound less like Hillary Clinton and more like Bernie Sanders.

If, as expected, Sanders loses this nomination battle, it will better for him and the party to exit with dignity and not, as Weaver proposed, in a pointless delegate fight that contradicts everything he stands for.