Sean Hannity flips out on Ted Cruz for bashing Donald Trump: "You gotta stop ... I'm getting sick of it"

"There are hosts who make their decision to go in the tank for Trump," Hannity's one-time hero now says of him 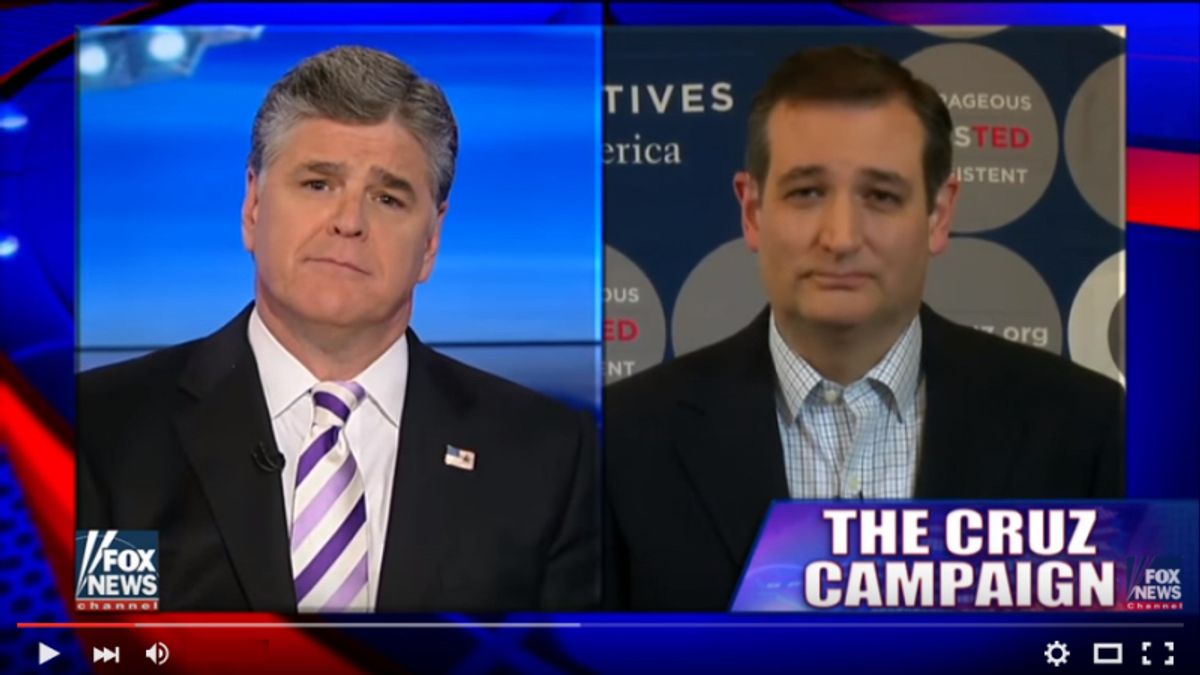 Last Week, Fox News host Sean Hannity finally did away without whatever misconceived semblance of impartiality his audience may have held onto when he declared, “I’m not a journalist, I’m a talk show host."

Presumably by embracing his role as a talk show host, Hannity meant to tamp down criticism that he openly campaigns for his preferred Republican presidential candidate and as ThinkProgress has reported, there is little doubt just who that candidate is:

[Donald] Trump has appeared on Hannity an astonishing 41 times since he announced his campaign last June, often for the entire hour. (On five occasions, Hannity replayed extensive excerpts from previous appearances by Trump.) In other words, you can watch Hannity interview Trump about once a week.

Hannity’s role is less of an interviewer than a member of Trump’s campaign staff. During his appearances, Hannity seeks to tamp down controversies, talk up Trump’s poll numbers, and tout his policy proposals.

So, while apparently throwing a bone to his one time conservative Tea Party hero Ted Cruz, hosting him on his talk radio show while New York Republicans voted in overwhelming margins for Trump on Tuesday, Hannity had little patient for Cruz's disparaging take on the Republican frontrunner.

"As I travel the country, nobody is asking me this, other than the Trumpsters and the people repeating it," Cruz shot back as he contended that voters are uninterested in the details of convention delegate math.

For the next 10 minutes, the two bickered as a contentious and uncomfortable new battle in the GOP civil war was waged.

“Sean, with all respect, that’s not what people are concerned about,” Cruz continued. “And the media loves to obsess about process. This process and this whining from the Trump campaign is all silly. It’s very, very simple…,” Cruz offered before Hannity interrupted.

“It’s more than a process question,” Hannity said. “It’s an integrity of the election question, and everybody’s asking me this question so I’m giving you an opportunity to explain it.”

“This… whining from the Trump campaign is silly," Cruz argued. "Sean, the only people asking this question are the hardcore Donald Trump supporters," he repeated.

But senator, why do you do this? Every single time I -- no, you gotta stop. Every time I have you on the air, and I ask a legitimate question, you try to throw this in my face. I'm getting sick of it. I've had you on more than any other candidate, on radio and TV. So if I ask you senator, a legitimate question that would explain to the audience, why wouldn't you just answer it?

A defensive Hannity took to Twitter to push back after reports of his meltdown began to spread: