A Prince for every occasion: He created his own borderless genre—and always sounded exactly like himself

Funk, soul, R&B, rock, pop, blues—Prince conquered them all, and championed female artists along the way 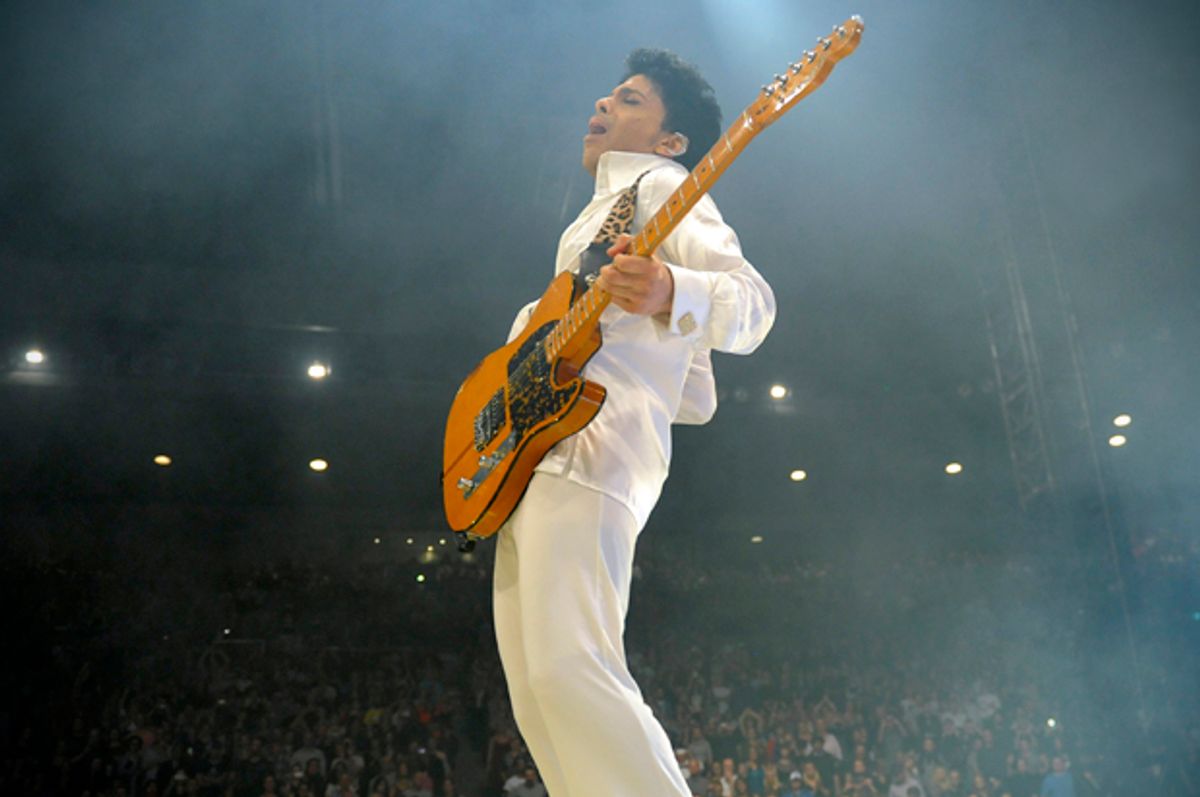 Last week, when TMZ reported that Prince's plane made an emergency landing so he could be rushed to the hospital, we all collectively held our breath. 2016 has been an uncommonly bad year for musician deaths, and the loss of David Bowie, Glenn Frey and countless other artists still feels like a raw nerve, even months later. Losing Prince—Prince!—would be not only inconceivable, but devastating. After word broke that he apparently just had a touch of the flu, and was discharged several hours later, we all exhaled. And then when the Purple One returned to Minneapolis and then proceeded to go on with his weekend—tweeting that he bought a Stevie Wonder album on Record Store Day at local shop Electric Fetus, and then later having an impromptu dance party/gathering at Paisley Park, where he showed off a new purple piano—we could maybe even breath a sigh of relief.

At that Saturday evening gathering, Prince made only a brief appearance, and The Star-Tribune reports that he apparently told the attendees, “Wait a few days before you waste any prayers.” That at-the-time mysterious quote seems utterly ominous now, with the news that Prince passed away today at Paisley Park, at the age of 57. No details were given, although the news was so shocking because he's been actively touring outside of Minneapolis: Just one week ago, he performed two shows in Atlanta, and the St. Louis Post-Dispatch revealed that Prince was slated to do two surprise shows in St. Louis on April 18. (This pop-up concert, however, didn't happen because the article notes he "had suddenly taken ill and didn’t want the dates announced, only to require a cancellation or rescheduled date.") These shows, dubbed "Piano and a Microphone," were just as they were billed: Prince, alone at the instrument, telling stories and performing songs from his entire brilliant career.

A KQED review of a February Oakland performance notes he "played no song in its entirety," but also observed "this medley approach didn’t feel crass. Instead, it felt like music naturally pouring out if the man, as it always has." But this performance format was simply the latest chameleonic move for an artist who was both cavalier toward and incredibly protective of his creative work. On the one hand, he was never beholden to his studio recordings: Hits medleys have been a staple of his live performances for years—so anyone wanting to her a full, say, "Raspberry Beret" is out of luck—and he treats his songs like malleable, evolving entities. Kanye West may have recently called "The Life Of Pablo" a "living breathing changing creative expression," but Prince has considered his catalog a work-in-progress for years now. For example, prior to his solo piano shows, he did a series of last-minute "Hit and Run" shows, which featured him on lead guitar performing while backed by a smoking soul-funk band, 3rdeyegirl.

This penchant for reinvention explains why every concert or tour he announced was such an event, and a must-see one at that. Fans never quite knew what exactly would happen or what form his songs would take on a given night. And because he was against filming his shows, the concerts took on a once-in-a-lifetime feel: Prince's unexpected covers or tributes (mostly) didn't go viral or become fodder for online news posts. They felt like a secret, part of his lore passed from fan-to-fan via reviews, message boards and social media. And when he did do high-profile performances—such as 2008 Coachella, where he turned Radiohead's "Creep" into a wrenching soul-blues number, or the Super Bowl XLI Halftime Show, which occurred in the pouring rain—he just did his thing, nonchalantly and with no desire for external validation.

Yet if there was a David Bowie era for everyone, there was also a Prince for every occasion. He was the life of the party (take your pick—"Let's Go Crazy," "1999," "Raspberry Beret") and the voice for the entire seduction continuum, from hesitant flirtation on through bedroom boots-knocking ("Do Me, Baby," "Scandalous," "Darling Nikki"). At times, he encouraged people to loosen their inhibitions ("Kiss," "If I Was Your Girlfriend," "Erotic City"), but he never lost sight of how vulnerability is a gift ("Purple Rain") and that being unconventional was perfectly acceptable. And, as has been noted many times, Prince was also a prolific songwriter, as influential as fellow Minnesotan Bob Dylan. In fact, the Purple One was the pen behind Sinead O'Connor's "Nothing Compares 2 U," The Bangles' "Manic Monday," Sheila E.'s "The Glamorous Life," Chaka Khan's "I Feel For You" and Sheena Easton's "Sugar Walls," to name a few.

In other words, he not only shaped '80s music with his own productions—he lent his stamp to the overall sound and feel of the decade, bringing playfulness, soul and seduction to MTV and the radio. And few artists have evolved their sound so seamlessly, and were able to write songs that so flawlessly crossed streams. A quick scan of recent concerts playlists reveals he incorporated snippets of songs by Bill Withers, Isley Brothers, Edgar Winter Group, Ray Charles, Muddy Waters, Elvis Presley, Bob Dylan and Bob Marley in with his own work. Funk, soul, R&B, rock, pop, blues—Prince conquered them all, and in the process created his own borderless genre. Prince's music always sounded, well, like Prince, a claim that few artists can make.

At the same time, Prince was adamant that he had every right to be selective about his catalog. His vault of unreleased music is the stuff of legend, while his albums are only available to stream on Jay-Z's artist-driven Tidal platform, which he spoke highly of in interviews. "They’re just getting their footing, and I think when there’s a company like that, or the OWN network—situations where we finally get into a position to run things—we all should help," he told Ebony in 2015. "It’s been a lot of fun." Prince owning and controlling every aspect of his image and career only made him more likeable, however—a paragon of artistic freedom, earned after navigating (and, finally, growing tired of) the major label system after years of (real and perceived) mistreatment.

Yet Prince wasn't selfish about his platform. He's spent the last few years championing R&B singer Judith Hill, going so far as to borrow Live Nation's email list to send a note offering people a free download of her album, Back In Time. And he's also been outspoken about politics: At the Oakland show, he said, "When someone says that their lives matter, they’re trying to get your attention,” a follow-up to his Black Lives Matter mention at the 2015 Grammys. His 2015 song "Baltimore," meanwhile, addresses Freddie Gray's death at the hands of police, while advocating for taking guns away and preaching love.

Prince was the rare multi-threat artist who did everything well: He was a gifted interpreter, virtuosic musician, dynamic performer, talented producer and a consummate songwriter. In recent years, all of those collided at the Super Bowl, he covered Foo Fighters' "Best Of You" and later unleashed a legendary rendition of "Purple Rain" that culminated with him grabbing his purple glyph guitar and coaxing out a snarling electric solo. The moment was breathtaking, of course, but it was also just another day at the office for Prince. No matter if he was performing in a stadium, a theater or at Paisley Park, he exhibited the same levels of joy and serenity, a stunning guitar player, keyboardist and vocalist most comfortable in the lane just left of center. In the '80s, pop music was Michael Jackson, Prince and Madonna. That there's just one genius left from that trio is not only patently unfair—it's a shattering blow.