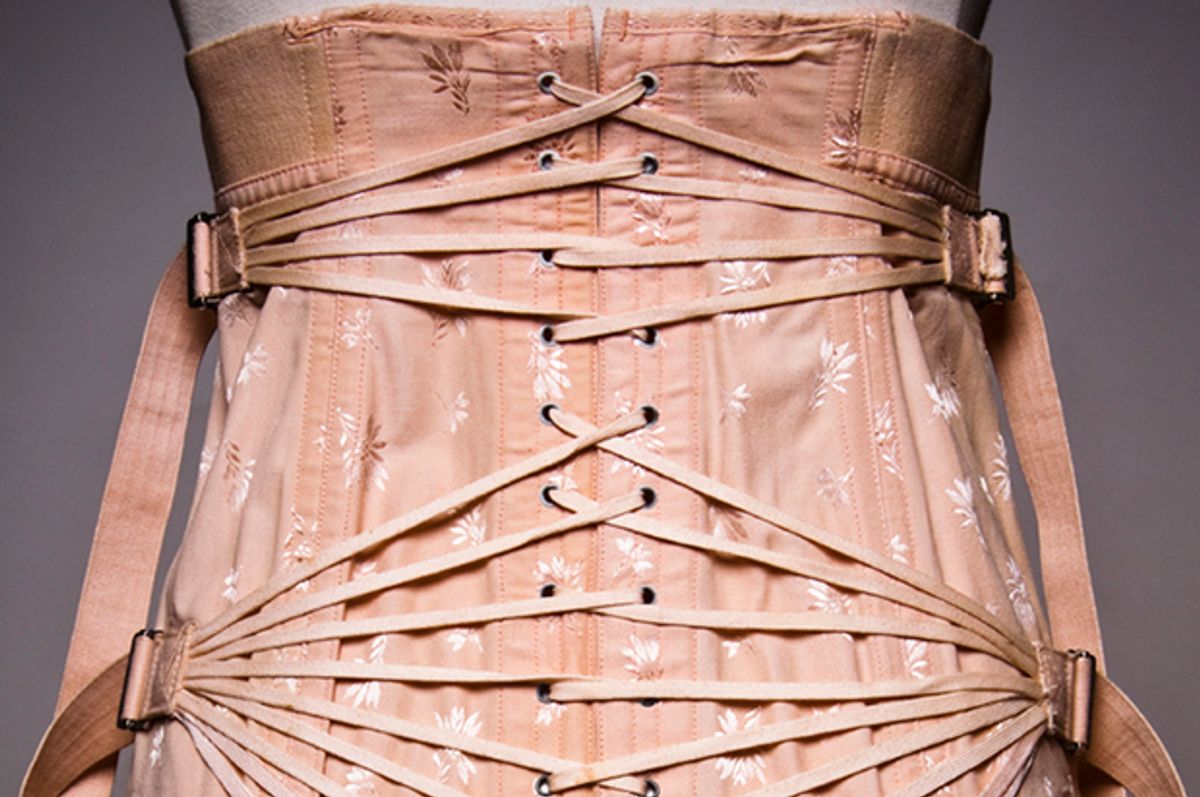 The state of Utah officially declared pornography a public health crisis this week, with Governor Gary Herbert explaining, “there are real health risks that are associated with viewing pornography” (Herbert had signed the declaration once last month, but did it again in April for good measure). Listed by the legislature are everything from “risky sexual behavior” to young children using hardcore porn at “an alarming rate.” Naturally, commentary erupted from the usual corners, with celebration by the Utah Coalition Against Pornography and anti-porn feminist Gail Dines, who seemed blithely unconcerned about aligning herself with a Republican coalition that might not be coming at this from a very feminist angle, and critique from both liberals and libertarians.

Now, I’m an historian, not a social scientist, though I will say, in my many years of reading both historical and social-scientific scholarship on pornography, I’ve come to believe that the single most deleterious activity porn causes politicians to do with their hands is wringing them. The evidence for porn’s imagined harms is simply unconvincing; a recent piece by sex therapist Marty Klein elaborates why in more detail. But while Utah has received extensive press coverage for the novelty of its public-health framing, what I see is just the latest iteration of a 150-year cycle that began with Anthony Comstock in the 1870s.

Pornography has always been medicalized; the term was first defined in an 1857 medical dictionary, after all. And the very metaphor of the body-politic has perpetually lent itself to imagery of moral disease and rot, as historian Carolyn Dean pointed out in her study of interwar France, "The Frail Social Body." In the U.S., where anxieties over sexuality are arguably a fundamental structuring force of this body-politic, pornography first became a public-health concern during the tumultuous decades after the Civil War, when urbanization, immigration, economic insecurity and more helped spawn the reign of the iconic smutbuster Comstock.

Indeed, the very man who pioneered American anti-porn activism also helped set the rhetorical template for Utah’s excursion into faux-medicalized moral panic. Anthony Comstock is best known for lending his name to the Comstock Act, the 1873 federal obscenity law that still makes obscenity a criminal act, unprotected to this day by the First Amendment. His moral crusading remains notorious, as he prosecuted everyone from anti-religion freethinker D. M .Bennett to Planned Parenthood founder Margaret Sanger (information related to abortion and contraception were both included in the Comstock Act). Ironically, Comstock persecuted actual doctors, such as E. B. Foote, whose "Words in Pearl for Married People Only" explained contraception. Another sex-reformer, Ida Craddock, whose pamphlets "The Wedding Night" and "Right Marital Living" emphasized women’s sexual pleasure, killed herself in 1902 after repeated obscenity charges, blaming Comstock for her death in a searing public suicide note that blamed censorship, not obscene materials, for “hoodwinking the public into believing that sexual information in printed books must be kept away from them, so as to protect the morals of innocent youth.”

Yet for Comstock, it was smut above all else that threatened the nation. His 1883 book "Traps for the Young" is an overheated masterpiece of florid anti-porn mania, couched in a rhetoric that wrapped up tropes of sin and damnation in the emerging modern medical discourse. Thus his chapter on smut (“Death Traps by Mail”) begins with Satan but quickly moves into phrasing that could come from a contemporary Utah Republican. “Like a cancer, it fastens itself upon the imagination, and sends down into the future life thousands of roots, poisoning the nature, enervating the system, destroying self-respect, fettering the will-power, defiling the mind, corrupting the thoughts, leading to secret practices of most foul and revolting character, until the victim tires of life, and existence is scarcely endurable,” he writes—and that’s at his more restrained. Lust is also “a frightful monster,” which “stands peering over the sleeping child,” casting smutty shadows.

Comstock gives us “disease, wounds, and putrefying sores,” debaucheries, suicides, murders, even acne and “tainted breath.” His tales of youth led astray and destroyed by smut are as visceral and exciting as the very dime novels by such authors as George Thompson that Comstock often burned. That was, of course, part of the reason the discourse worked so well; as French theorist Michel Foucault later noted, regulating and repressing sexuality can itself provide a perverse pleasure.

Until his dying day in 1915, Comstock intransigently insisted on the veracity of his analysis—even as a highly sexualized consumer culture sprouted around him, a testament to his failure. Comstockism would wax and wane, falling to the background during the 1920s Jazz Age or the wartime social dislocations of the 1940s, but it never vanished. During the Cold War heyday of the 1950s, in particular, it surged back into public consciousness, with a widespread anti-porn fervor tied to the domestic politics of the era, which sought to discipline and contain sexuality within the heterosexual nuclear family.

National leaders from Tennessee Senator Estes Kefauver to FBI chief J. Edgar Hoover constantly linked smut to juvenile delinquency, sexual perversion and more. No group better embodied this resurgent anti-porn sentiment than Citizens for Decent Literature, founded by lawyer Charles Keating in late-1950s Cincinnati. CDL quickly built a national base, and its widely-seen 1963 propaganda film "Perversion for Profit" again employed a public-health lens toward smut. In it, narrator George Putnam held up posterboards showing the effects of pornography: increased VD rates, illegitimate births, juvenile delinquency and, worst of all in the Lavender Scare Fifties, such “sex deviations” as homosexuality or lesbianism! (It’s impossible to avoid exclamation marks in recounting this.) The evidence for all of this? Well, in one rare moment of candor a few years later, Charles Keating admitted he simply made it all up—which hindered CDL none, as it became the preeminent anti-porn group of the 1960s and ’70s, influencing everything from Supreme Court nominations to legal obscenity doctrine.

I found myself so captivated by "Perversion for Profit" that I named my first book after it, and in researching local CDL units I wound up at the Utah State Historical Society in Salt Lake City, examining the records of the Youth Protection Committee, a Salt Lake City organization established in 1958, which frequently worked with CDL. The language of social hygiene, precursor to public health, permeates its archive; in its 1958 bylaws folder, the committee lists “facts concerning the menace of obscenity and pornography,” including a 110 percent increase in rape cases since 1937 and a 25 percent increase in venereal disease. This logic animated the committee, as did concern that exposure to smut might corrupt children into homosexuality. Police chief W. Cleon Skousen, author of the paranoid tract "The Naked Communist," visited in June 1958 to inform the committee that “wherever you find a sex deviate, you find pornographic literature.” A few years later, another police captain reassured them of homosexuality that “in this vicinity it is not as serious as in some other areas of the country,” though he nonetheless had “a list of 30 names of young girls in this community who are involved”—“your daughter, lured into lesbianism,” as Putnam warned in "Perversion." In 1965 the group contacted a local health study asking about the relationship between porn and VD, and asserted a “real correlation.”

This analysis had material consequences, and when nearby Provo passed an anti-obscenity ordinance in 1966, only the phrasing, not the substance, departed from the 2016 resolution. While Provo expressed concern about inciting “sexual promiscuity or extra-marital or abnormal sex relations . . . on the part of young persons,” Utah today bemoans “problematic sexual activity at younger ages” and the “lessening desire in young men to marry, dissatisfaction in marriage, and infidelity.” Twenty-first century “public health” entails precisely the harnessing and disciplining of “normal” heterosexuality as the Cold War era witnessed.

In the half-century interim, this rhetoric recurred incessantly, coming mostly from the political right but also the left, as in the case of the feminist anti-pornography movement. When the President’s Commission on Obscenity and Pornography, appointed mostly by Lyndon Johnson and undertaking three years of social-science research, released its monumental report in 1970 calling for the decriminalization of adult obscenity, it found sexual ignorance and mystification more harmful than smut. President Richard Nixon responded by denouncing its “morally bankrupt conclusions,” using pollution as his metaphor of choice: “the pollution of our civilization with smut and filth is as serious a situation for the American people as the pollution of our once-pure air and water,” he said. Congress agreed, rejecting the report in an overwhelming, bipartisan consensus.

Meanwhile, as anti-porn feminist leaders Andrea Dworkin and Catharine MacKinnon theorized pornography as a form of sex discrimination rather than speech in the 1980s (thus making it an action rather than mere expression, and subject to civil rights law rather than the First Amendment), one of the proposed laws inspired by their work, a 1992 Massachusetts measure, framed pornography as a “practice of sex discrimination which exists in the commonwealth and threatens the health, safety, peace, welfare and equality of its citizens.” While it failed to pass, once more the resemblance to Utah’s latest is striking.

So, the Utah resolution breaks less new ground than it purports. In its specific invocation of public health it mimics recent efforts by such groups as the American Public Health Association and Doctors for America to declare gun violence a public health crisis, and it also reflects the sophisticated institutionalization of conservative doctrine as purported science on issues ranging from climate change to evolution, which has evolved in the past few decades into a particularly effective strategy. Of course, many of the harms Utah lists are genuine social problems: treating women as “objects and commodities,” risky sexual behavior, hypersexualized youth, violence and abuse -- these are real and troubling things. But they are results of our toxic combination of still-prevalent patriarchal sexual values, poor sex education that still fails to affirm sexuality through the promotion of consent and desire as bedrock values, and, one might add, both the culture industry that has hypersexualized youth dating back to Shirley Temple’s Baby Burlesks era and the capitalism that commodifies all of our bodies as a basic operational principle.

Porn has always been an easy soapbox from which to proclaim one’s own moral virtues. In "Perversion for Profit," I argue that the modern right has always been more interested in damning the imagined “floodtide of filth” than actually damming it, and sanctimonious Utah bears this out, allotting precisely zero dollars to, well, doing anything about this public health crisis that poses such ostensible social threat. By this point in American history, the camps in this debate are probably too siloed to establish enough common ground for real dialogue. But at the very least, let’s not pretend this is an innovation. Utah’s new resolution is the rehashed ghost of Anthony Comstock calling, warning us about all that grim Satanic lust while doing nothing to address the conditions that perpetuate inequality, violence and sexual abuse.