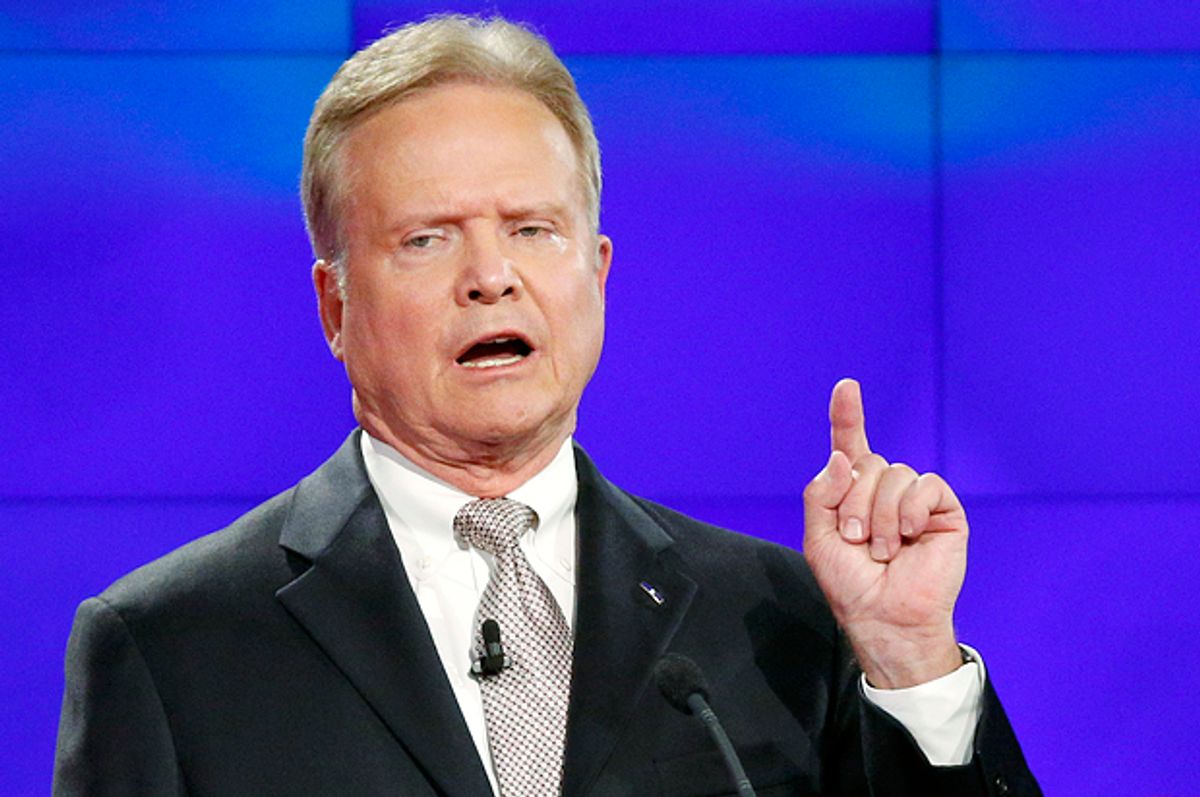 Jim Webb’s evolution as a political figure is an interesting story. Way back in 2006, he narrowly won his Senate race in Virginia thanks, in part, to the persistent racism in the American political system – Webb’s opponent, George Allen, was caught on tape demeaning a Webb campaign staffer with a racial epithet, and he was engulfed in a media firestorm that never subsided. A decade later, Webb is out of the Senate and emerging as a spokesman and apologist for a bygone era of Democratic politics that was built on racism.

Reacting to the news that the Treasury Department is displacing Andrew Jackson from his position of honor on the $20 bill and replacing the seventh president with Harriet Tubman, Webb wrote a Washington Post op-ed over the weekend bemoaning the harsh public treatment of Jackson as a war criminal, ethnic cleanser, and slaveowner. Jackson was all of those things, but Webb argues that the recent focus on Jackson’s abominable record is a symptom of malicious “political correctness.”  He prefers to hold the cognitively dissonant belief that Jackson, a defender and practitioner of slavery and author of the deadly displacements of thousands of Native Americans, was nonetheless a champion of “the dignity of the common man.” That assessment can only be deemed true if you interpret “common man” to mean “white people.”

As my colleague Scott Eric Kaufman writes, Webb’s treatment of Jackson is itself laughably tendentious and guilty of the sort of historical cherry-picking he accuses Jackson’s critics of practicing. More than anything else, Webb’s op-ed makes clear that the Jacksonian legacy has benefitted and continues to benefit from decades of kid-gloved historical treatment that lessens the significance (and lethal consequences) of his morally repugnant expansionist policies in favor of the romanticized vision of Jackson the pugnacious populist. And as Webb sees it, the positive aspects of Jackson’s record are of paramount and lasting significance, while the ethnic cleansing merits a giant asterisk because, well, that’s just how things were back then.

Not surprisingly, Webb’s defense of Jackson is earning him some attaboys from conservatives who share his distaste for “political correctness” and are always on the hunt for an opening to slag the left. National Review’s John Fund credits Webb for resisting “today’s politically correct wholesale assassination of America’s past leaders,” and writes that Webb’s op-ed shows how “his often admirable views are an antique in the modern Democratic Party.” But in Webb’s case, it’s not just that his views are antiquated (they are), it’s that they don’t make sense.

For Webb, Andrew Jackson isn’t just a persecuted historical pariah, he’s also a model for how the Democratic Party should conduct its business. “The Democratic Party could do very well by returning to its Franklin Roosevelt, Harry Truman, Andrew Jackson roots,” Webb said on NPR last year, “where the focus of the party was making sure that all people who lack a voice in the corridors of power could have one through their elected representatives.” The Jacksonian Democratic Party operated according to explicit white supremacy, and, as Charles Pierce wrote, “while FDR and Truman were fine presidents, who did some of all that they could have done, they still presided over a Democratic party that was the political and constitutional bulwark of the Jim Crow South.” Webb wants a revival of the old-time Democratic political dynamics and also to sweep aside the racism that fueled them as small-print footnotes in a story of progress and prosperity.

The end product of this tortured worldview is the nonsense argument that both Andrew Jackson and Harriet Tubman should exist on the same plane of historical reverence. “By any standard we should respect both Jackson’s and Tubman’s contributions,” Webb writes. He doesn’t mean that, of course, because the only standard he’ll accept when it comes to Jackson is one that minimizes the incomprehensible horrors that happened on his watch.