Drudge, Koch, Soros, Bezos: These 4 non-politicians will determine the next president 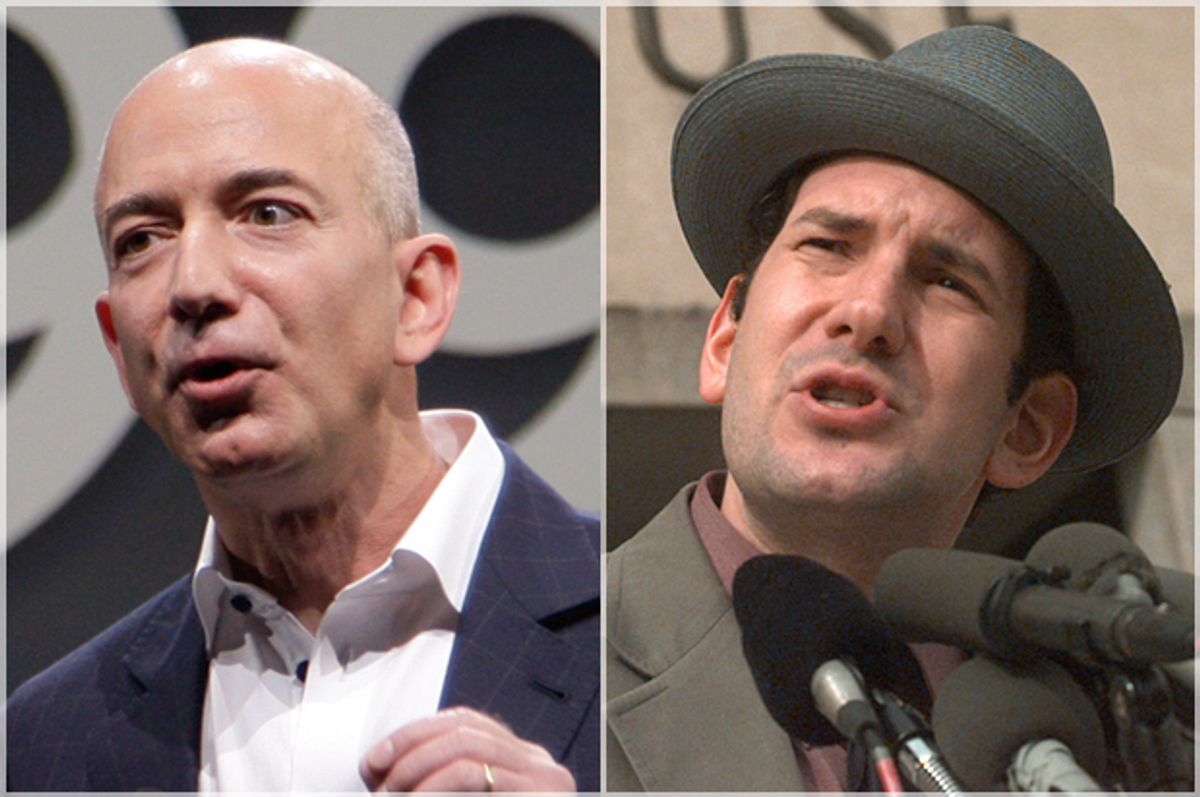 Over the weekend, The Hill published its list of "Five Internet powerbrokers who could shape the election": They selected Mark Zuckerberg, Matt Drudge, John Oliver, Arianna Huffington and Erin Hill.

They're approximately 20 percent accurate. While this list would have held water prior to the Supreme Court's 2010 decision in Citizens United v. FEC, The Hill places undue value on social media.

"Twitter, Snapchat and other social media tools are also playing a role in the race," the story argues for Zuckerberg's influence, "but they do not have the reach of Facebook."

If "likes, posts, comments and shares" were a valid metric, Bernie Sanders would be king of the world right now.

Citizens United invalidated any sort of grassroots political buzz (e.g. Sanders). Even the master of media manipulation, Donald Trump, won't be able to translate his Twitter-momentum into a general election win against establishment collage Hillary Clinton, unless he can unite the GOP behind him.

The ability of nonprofits to accept unlimited individual donations to push a political agenda is far more important than whether or not the "money-losing" Huffington Post covers Trump under its "entertainment" or "politics" section.

So-called dark money, in conjunction with a wide-reaching "mouthpiece," paves the road to the Oval Office -- and even a brilliant John Oliver expose can't change that.

Special interest groups -- like the NRA -- can scrounge up a good chunk of change for the candidate most likely to maintain the status quo, but Super PACs are the best source of dark money.

PACs have the added benefit of keeping their donors anonymous, which is a nice feature for people who don't want their tennis partners to know they bet on the wrong horse or, worse yet, backed Trump.

As the face of the Koch Brothers — the infamous proprietors of libertarian-leaning Freedom Partners Action Fund -- Charles Koch deals with the client-facing aspects of Koch PR.

In an interview with ABC on Sunday, Charles Koch explained his and his brother David's decision to withhold their much-coveted endorsement of the remaining candidates. In so doing, Charles condemned what he called a "two-tiered system" (i.e. a regressive tax) and suggested Hillary Clinton might make a better president than Cruz or Trump.

Koch's Hillary support isn't necessarily as out-of-left-field as it may seem, considering the brothers' recent embrace of criminal justice reform.

Last spring, Politico Magazine reported that "Koch had decided to help pull together a new coalition of left-right advocacy groups in Washington, including the Hillary Clinton-aligned Center for American Progress" with an aim towards eradicating prison overcrowding.

Among the major donors to the Center for American Progress is billionaire George Soros, who's given $7 million to the Hillary Clinton-endorsing Priorities USA Action Super PAC during the 2016 cycle.

Soros was the top individual donor during the 2008 cycle as well, giving $5 million to four 527 organizations. In 2012, however, he gave just $1 million to Obama reelection PAC, Priorities USA.

Soros has invested a relatively significant amount of personal money into this cycle, and is likely to up the ante when the general election rolls around.

There's a limit to how far PAC money can keep a candidate afloat (e.g. Jeb! Bush and Li'l Marco Rubio). For lack of a less conspiratorial word, every special interest needs a mouthpiece.

Not a known political financier, Amazon's Jeff Bezos took a less direct route to political influence in purchasing the Washington Post in 2013. And though WaPo is a humongous organization, editorial leanings in the media tend to have a top-down effect.

Despite his nearly $55 billion net worth, Bezos has donated relatively small amounts to Democrats ($28,000) and Republicans ($4,000). Some, however, claim he's similar to other tech entrepreneurs who support a libertarian, small-government platform.

In the months since the Editorial Board's unendorsement, the Post has been accused of repeatedly parroting Clinton's agenda.

(Note: Drudge was on the Hill's list, too. He's undisputedly good at shaping the national political narrative.)

As the namesake of prominent news aggregation site, Drudge Report, Matt Drudge wields his right-wing influence through the careful curation of what appears on the site's homepage.

In their book, "The Way to Win," Mark Halperin and John F. Harris call Drudge "the single most influential purveyor of information about American politics" for his role in John Kerry's loss in 2004.

Drudge Report reader polls, conducted after each televised debate this primary cycle, consistently declared Trump the winner. And a when asked who they're supporting for the presidency, participating Drudge readers voted overwhelmingly in favor of Trump (60% to second place Ted Cruz's 19%).

And though these polls are decidedly unscientific, they did capture the intensity of Trump's support -- the real story of the GOP campaign -- and people are starting to give Drudge more and more credit as the Trump train chugs towards Cleveland.

In a radio interview earlier this month, Cruz complained that Drudge Report "has basically become the attack site for the Donald Trump campaign."

"By all appearances, Roger Stone now decides what’s on Drudge, and most days they have a six-month-old article that is some attack on me," Cruz added. "Whatever the Trump campaign is pushing that day will be the banner headline on Drudge."