The librarian who outfoxed Al Qaeda: "In one spasm of violence, they burned just about everything they could find" 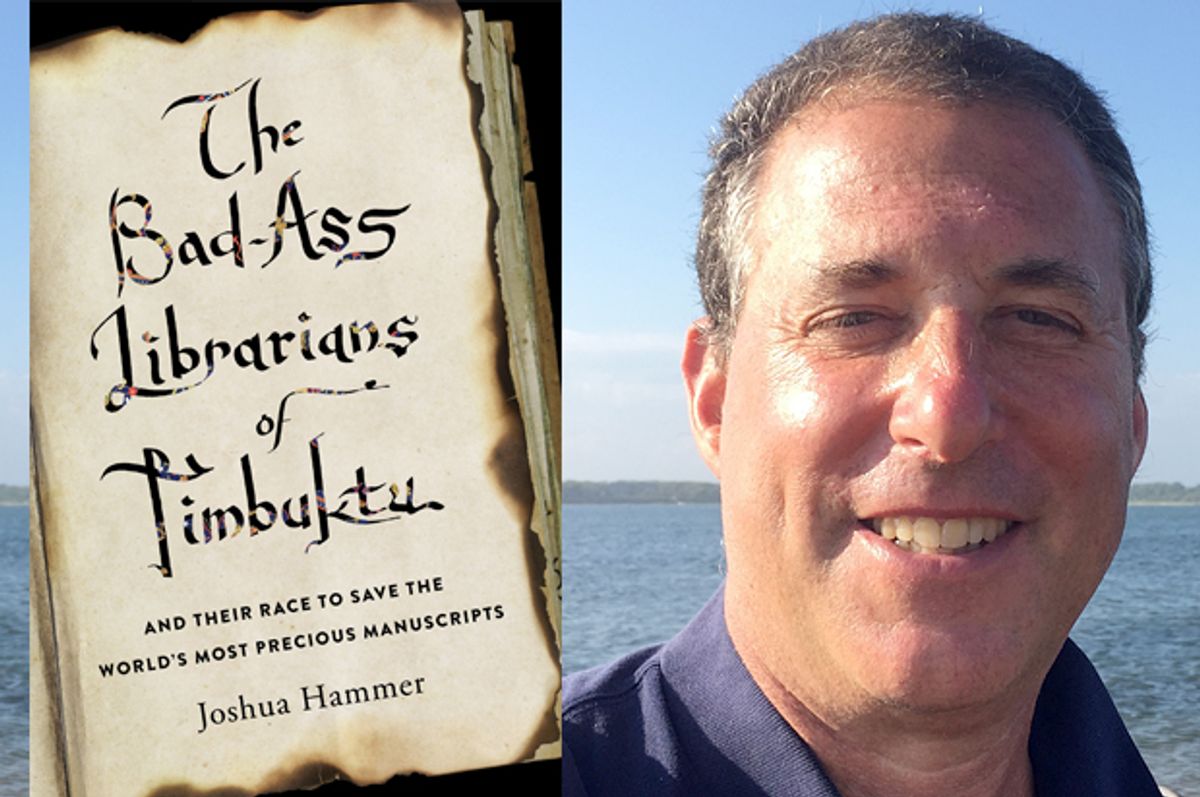 It’s an unlikely story, and at times a gripping one: A new book, “The Bad-Ass Librarians of Timbuktu,” tells the tale of how a gutsy collector saved thousands of documents he considered an important part of cultural history. As if the Sahara desert wasn’t a worth enough opponent, the arrival of Al Qaeda made it even more daunting: It was only because of Abdel Kader Haidara and a group of brave librarians that these manuscripts about poetry, music, sex, and science did not end lost in the desert or up in smoke.

The book, Jeffrey Brown wrote in the Washington Post, “vividly captures the history and strangeness of this place in a fast-paced narrative that gets us behind today’s headlines of war and terror. This is part reportage and travelogue (there is a great deal of “setting off” in Land Cruisers, on camels and in small boats along the Niger River), part intellectual history, part geopolitical tract and part out-and-out thriller.”

We spoke to the Berlin-based Hammer from Seattle, where he was touring behind the book. The interview has been lightly edited for clarity.

Let’s start with your main character, Abdel Kaider Haidara. What’s he like, and what motivated him?

Abdel Kaider Haidara was the go-to guy: He had created his own library, and had created an association for other librarians. He was the repository for this whole effort to rediscover manuscripts from the golden age of Timbuktu and afterwards that had been dispersed and often lost in the desert and the villages along the river and this very large, remote, difficult to penetrate area of northern Mali.

He’s kind of a big guy in every way – big physically, fills up a room with his presence, a charismatic figure. With a lot of energy, a certain sense of pride and dignity, a true lover of books and manuscripts, extremely knowledgeable about the region. Also a very shrewd operator: He was very successful at reaching out to Westerners, charming them, and raising money for his cause. An obsessive guy: He began pursuing this, what began as something he stepped into almost against his will, in the 1980s it became his lifelong obsession and pursuit. You could say he really single-handedly revived Timbuktu’s fortunes by reconnecting it to its culture.

It’s sort of a cliché to say that narrative nonfiction can “read like a novel.” But this one really does. Did you have any novels, or movies for that matter, in mind while you were writing it?

One of the things that appeals to me about great television – “The Americans,” “Breaking Bad” – is the ability to have a handful of plots running concurrently that all converge. So I was drawn to that structure, and that’s why I began with the story of his life, and focused on Adbel Kader’s quest in the desert, and then cutting away, very dramatically, and I think, to this general sitting in Stuttgart with this general watching the rise of jihadis. And then returning to Abdel Kader and his quest, and then cutting away to the rise of these jihadis. Juxtaposing several different stories was something I had in mind, and something I set out to do when I wrote the book.

How impressive and advanced were these documents? They weren’t just a bunch of papers, but the crown of a civilization.

We’re talking 375,000 manuscripts. Yeah, sure, there were some boring legal documents, and commercial transactions from the slave trade and the ivory trade. But there were also a tremendous number of richly decorated, gilded with gold leaf, incredibly intricately illustrated volumes – diagrams deconstructing Arabic-language poetry, charts of the solar system and stages of the moon, beautifully embroidered Korans, sayings of the Prophet… all sorts of artistically magnificent works that are just considered priceless today.

Give us a sense of what Timbuktu was like in the 14th to 16th centuries, and what it’s like now.

I think all the travelers who set foot in the place – as Leo Africanus, who wrote a book about it in the 16th century – were just blown away by this place. The energy, the wealth, the markets everywhere, with camel caravans coming in from the Sahara, convoys of boats coming up the Niger River carrying ivory and slaves and products out of the jungle. The camel caravans carrying textiles from Europe, booksellers, paper vendors – everybody converging on Timbuktu. And gold – everywhere was gold. It was the main currency.

So it was this incredible febrile commercial center which also had this additional overlay of scholasticism: You had 25,000 students at the peak of Timbuktu’s period as a scholastic center, studying in these unofficial universities connected to mosques You had scribes and scholars and scientists and architects, 100,000 people – it must have been an incredible scene.

Compare it to what it is now – kind of a sleepy, desolate, run-down, monochromatic desert town of not too many distinguishing features except for a few of these grandiose mosques that are the vestiges of that era, plopped down at the edge of the Sahara.

The vision we get of the Islamic world is more nuanced than what we get these days in American political discourse. There’s a rich, scholarly, varied Muslim culture a few hundred years ago, and then that learning is later threatened by the Muslim terrorists of Al Qaeda…

This repeats a theme: As I point out a few times in the book, this was not a singular occurrence. You had jihadists influenced by Wahhabism, which emerged in the 18th century. And fundamentalist Muslims who weren’t even connected to Wahhabism. Which grew out of the Sufi tradition, which was in constant conflict with the moderates who liked to sing and dance and worship saints and were kind of laid back about their religion. Someone who traveled there – Leo Africanus – commented that they’re singing and dancing in the streets of Timbuktu until the early hours of the morning. He made it sound like Paris on a typical summer night.

Juxtaposed against that was this severe strain of Islam that was fundamentalist, hardcore, hated music and celebration and just wanted to [stick] rigidly to the Prophet Muhammad’s vision and the early caliphates of Islam.

You had an attempt to impose a fundamentalist state in Timbuktu in the 19th century, it lasted for a few years, and then you had this real severe… I don’t think these guys were chopping off hands and feet or executing adulterers, that came in 2012 with the most recent band of fundamentalists swept out of the desert.

How close did this adventure come to an unhappy conclusion? There were times when these documents were really threatened.

There were definitely some close calls, where individuals were caught smuggling these documents and chests out of the city. That happened a few times. Curiously – and nobody can really figure out why – they were always let go…. I think the jihadis always had other things to worry about. They were destroying the overt symbols of a form of Islam they hated, like these Sufi monuments to saints.

It was only at the end of this, as the French military bore down on the city, and the jihadis prepared to evacuate, that they decided, “Here’s our moment to get our revenge -- on anything connected to the West.” These documents were seen as UNESCO-protected and highly valued by Westerners and the people of Timbuktu. So in one spasm of violence, they burned just about everything they could find.

So, who knows, had the manuscripts not been taken out over those months previously? [The jihadis] could have gone from house to house, ransacking them and destroying everything they could. In the last days they said to the imams: We’d like you to bring your manuscripts here, and we’re going to burn them publicly. Things got nasty.