Why Bernie must keep running strong: Strength is the only language the establishment understands

Calls for Sanders to scale back his primary challenge miss one very big point: He can still make a difference 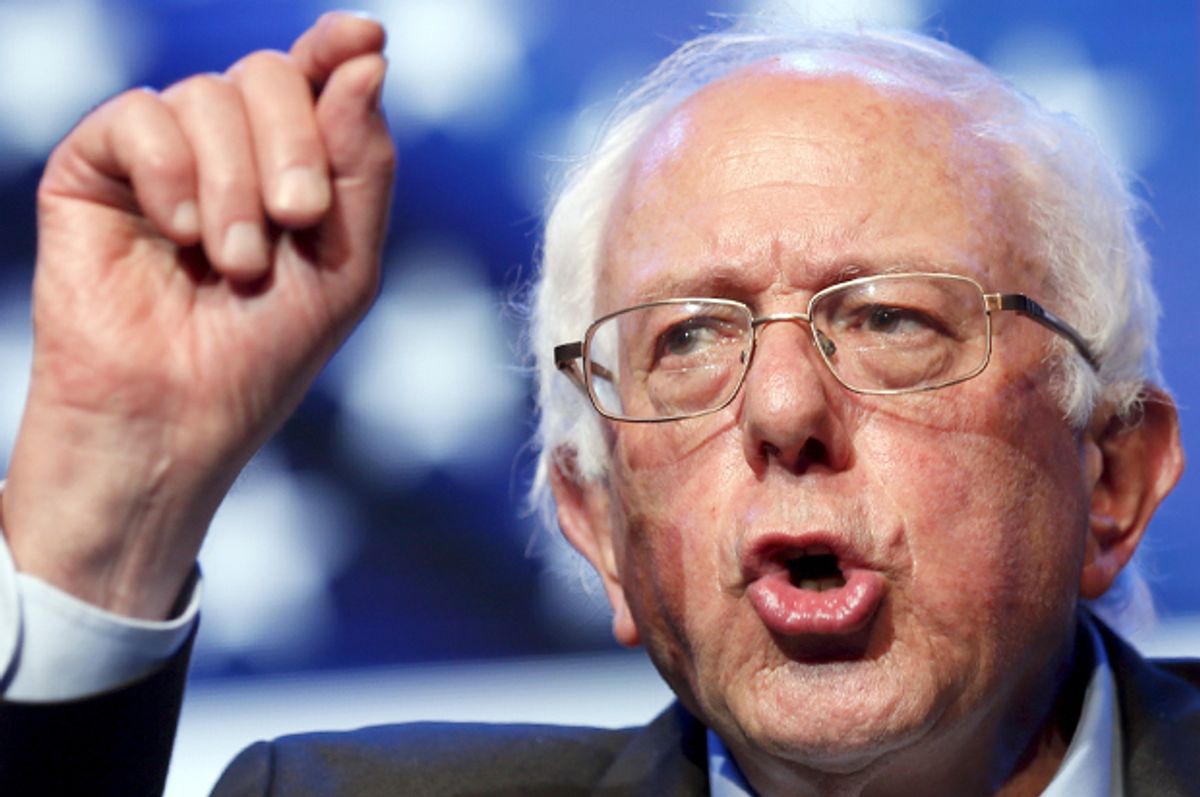 Bernie Sanders’ chance at the nomination has all but slipped out of reach. The Acela primary, tone-deafly named for the expensive train that political and media elites ride up and down the East Coast, was a rout everywhere but Rhode Island. And so the party establishment hopes to wind down a contest that they never wanted wound up in the first place.

“If he tones down the rhetoric and continues to fight, he’ll go out on a very high note with a lot of people, including me, thinking he did a great service to American democracy,” former Pennsylvania Gov. Edward G. Rendell told the New York Times. “But if he keeps it up, it could be brutal.”

Sure, but brutal for who?

Sanders knows that he has very probably lost and has hinted as much in recent days. But the certainty of electoral defeat is no reason to capitulate. Rolling back this campaign, the success of which has shocked supporters as much as detractors, would be a mistake precisely because its greater purpose now lies beyond November. Toning down would be self-sabotage and legitimize the very immiserating New Democratic politics that helped bring about this strange political conjuncture the first place. An unprecedented number of Americans are choosing (by way of slight hyperbole) between socialism and barbarism. Sanders must keep his banner high because he has a key role to play in leading the movement to its next steps.

The Sanders movement is powered by a rising cohort of exceptionally leftist youth and growing working-class disaffection, and has the potential to transform American politics in the coming years. Its strength, however, depends on Sanders fighting as hard as ever for the very large number of outstanding voters, and on starting to build infrastructure now to do big and transformative things in the coming years.

The Democratic establishment, however, will wage an unyielding campaign to shame the left into falling in line and holding its noses. Boiling hot takes will be dished out every time someone like Susan Sarandon dares to suggest that she might abstain in November. All, of course, for the greater good of party unity before the specter of a possible President Trump.

In reality, however, this is an enormous distraction from the Clinton campaign’s real goal, which is to ensure that they can take the left for granted without suffering political consequences.  Indeed, according to the New York Times, Clinton “does not feel pressure to enthrall the supporters of Senator Bernie Sanders of Vermont, since she thinks most of them would ultimately vote for her, an assertion backed up by polling."

It’s true: Most everyday Sanders fans will vote for Clinton in November.

That’s what makes the increasingly serious discussion about uniting the party and healing the wounds so curious: If most voters will engage their gag reflex and pull the lever, then why the worry? The problem is not so much losing Sanders voters as it is ensuring that the left is kept in line as she pivots (which in sanitized journalism-speak means changes the direction of cynical pandering) to the general election and toward the right. The frequent references to the famous Obama-Clinton rapprochement of 2008 are beside the point: That contest, unlike this one, was not premised on ideological warfare. This is a first-time-in-a-longtime real firefight, and it bears resemblance neither to 2008 nor to milquetoast pseudo-dissidents like Howard Dean and Bill Bradley.

What does Clinton, so eager to pivot toward the general election, want to stop talking about? We’ll find out soon enough, but substantial rightward adjustments can be expected. Their degree and number will be limited only by how much Clinton feels like Sanders voters are still independent. Because that independence is threatening.

Democrats have long obsessed over the threat posed by the left, and they have done so regardless of its strength or weakness, and it has mostly been the latter in recent decades. The left has been blamed for George McGovern’s 1972 landslide loss to Richard Nixon, which conveniently exculpates President Johnson and Hubert Humphrey for waging a murderous war in Vietnam that was also, as it turned out, an enormous political gift to the right. More were blamed for Ralph Nader in 2000 “electing” George W. Bush, which exculpates the establishment for the political consequences of the party’s rightward turn under Bill Clinton.

Time and again, the New Democrat establishment blames the left for the party’s failures because it doesn’t want to take responsibility for them. If Clinton somehow loses to Trump this November, expect them to insist that Sanders, having dragged her too far to the left, is at fault. And if Clinton ditches progressive campaign pledges in the coming months, it will be done in the name of appealing to storied swing voters who reside in a special place called the political center. Not because she, you know, wants to.

But the success of both Sanders and Donald Trump have exploded the idea that voters are desirous of the sort of moderate centrism that makes Al From and David Brooks sleep well at night. In reality, New Democrat policies, defended as pragmatic, are actually just preferred by the New Democrats and their corporate patrons. The policies, however, are increasingly unpopular. Voters aren’t swinging. They’re scattering. And many want nothing to do with business-friendly reaction dressed up as cautious incrementalism.

That’s why this loss will be such a big win. Sanders has showed the powerful possibility of an inside-outside strategy to transform not only the Democratic Party but American politics as a whole. The 2018 election will be an opportunity to transform the Sanders mobilization and fundraising infrastructure into a nimble organization to support Berniecrats, independents and third party candidates, and to deepen movement ties. The insurgency must neither depend on the Democratic Party nor reflexively dismiss it. It must be institutionalized. But it should not be coopted.

Sanders will endorse Clinton. But he must do so using truthful words: She is better than Trump. Sanders, unlike other politicians, doesn’t lie well. And if he starts lying now, no one will believe him. A too-full-throated endorsement wouldn’t be taken seriously and would undermine his authenticity.

If I lived in a swing state, and thankfully I do not, I might vote for Clinton (though the fact that she is to the right of both Trump and Cruz on foreign policy would make that immensely difficult). I’m happy, however, that people are loudly insisting that they will not. The left’s muscle only has power when it gets flexed. The Sanders campaign shouldn’t stop fighting today, tomorrow, or really, for that matter, ever.