Carly Fiorina, bullsh*t artist: Ted Cruz and the D.C. media love a female business leader who was bad at business and hates women

Ted Cruz needs help with women. So he brings on a female running mate more anti-woman than Donald Trump. Brilliant! 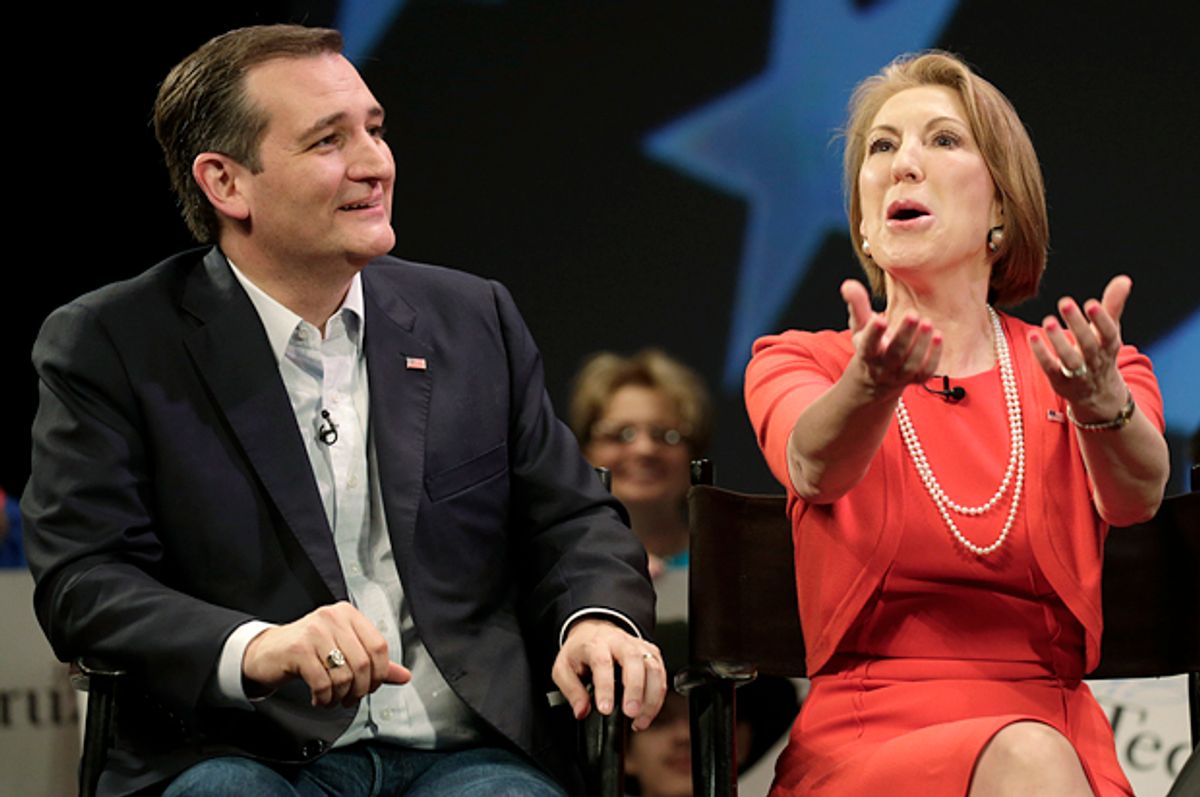 Ted Cruz naming Carly Fiorina as his running mate is the perfect move—for illustrating once again just how clueless America's political elite and their media truly are. The move makes perfect sense in the context of elite politics, but it has a mountain of facts stacked against it, and if this cycle has been about anything, it's been about how political elites have lost control over what ordinary voters know, think and see.

Second, Fiorina is just the sort of anti-feminist woman the elite media loves. In spinning her own life story, she's all about using her gender to get ahead, while simultaneously blasting “identity politics” that might do the same for anyone else. She even went shamelessly old-school feminist when attacked by Donald Trump—without a thought of standing up for anyone else.

So the media—in their benighted view—will inevitably see this move as "innoculating" him against presumably “partisan,” “political,” or otherwise illegitimate attacks, while, fourth, serving as the ideal "attack dog" both against Trump in the primary, and fifth, against Hillary Clinton in the general, should it come to that. Simply ticking off the list  of strategic wins this represents would be enough to make a political analyst swoon.

But, of course, the facts are all to the contrary. First, as already noted, Cruz's anti-woman politics run very deep, even proudly touting endorsements from fringe extremists. His disdain for women runs much too deep to fix with a  simplistic affirmative action running mate selection—a second factual minefield. The depth of Fiorina's failings as a candidate were meticulously noted by Digby after her much-hyped debate performance last September, in which she noted:

[M]uch of what Fiorina says is either untrue or incoherent, which her polished style of rapid-fire answers containing long lists of memorized specifics obscures. She is a master at what we used to call “dazzling them with BS.”

Third is the fact that Fiorina herself is not a woman-friendly candidate—her blatant lies about the Planned Parenthood video that Digby called out (which have since lead to an indictment) are arguably indicative of a deep pathology. But it's not just about reproductive rights, as I noted last August:

When Fiorina announced her candidacy, Media Matters pointed out that promoting Fiorina as a “rebuttal” to the “war on women” narrative ignores the anti-women impact of her policies, citing her positions on the gender pay gap, the minimum wage, and access to reproductive health services. But her hostility particularly impacts working women, and reflects a broader antagonist attitude towards workers.

Finally, fourth, just for good measure, Fiorina was not a good business leader either.  In fact, she was a business disaster, tanking the value of HP's stock by 50 percent during her tenure. I devoted a good chunk of the August 2015 story to Fiorina's business failures, citing sources such as "Carly Fiorina as a boss: The disappointing truth," a Fortune commentary by Jeffrey Sonnenfeld, Senior Associate Dean for Leadership Studies at the Yale School of Management, “The Rise and Fall of Carly Fiorina: An Ethical Case Study,” and a 2009 summary post at Media Matters' Political Correction site. There are oceans of information out there about Fiorina's business failures. As I wrote at the time, “there’s more than enough in Fiorina’s record to sink three or four 'anti-Hillary' dream candidates.”

Facts, of course, have no place in elite discourse. They're fine if they fit, but if not, lies do just as well. Knowing this, a Planned Parenthood spokesperson skipped the deep factual background and went straight to the point in response, as Think Progress reported:

“A Ted Cruz and Carly Fiorina ticket give women in this country nightmares,” Laguens said. “Ted Cruz and Carly Fiorina both want to criminalize abortion and would rather shut down the government than allow low-income women to access birth control and cancer screenings at Planned Parenthood. This agenda is so unpopular that both Cruz and Fiorina resort to blatant, inflammatory lies to legitimize their extreme beliefs. These lies truly threaten women’s access to health care in this country.”

“Together, they form the most loathsome pair in America,” she added.

Of course, if it came to a general election battle, the elite media would try to make it close. If horse-race politics is all you know how to do, you have every incentive to keep it close—or at least try and pretend that it's close. But given the decline of elite media and the rise of social media that have become sharply more obvious already this election cycle, it's entirely possible that such a campaign could backfire spectacularly, exposing ten of millions of voters to more radical/progressive feminist critiques of the sort of framing that Cruz is depending on.

It's profoundly unfortunate that MSNBC canceled the Melissa Harris Perry Show, given that the show thrived on bringing such critiques more into the mainstream. But there are plenty of capable analysts working now too keep such critiques flowing, and actually help educate folks about other ways of understanding politics.  Hillary Clinton might not be the ideal spokesperson to have out there talking about “intersectionality.” Ironically, Carly Fiorina, providing such a rich flow of material to critique, might turn out to be a much better catalyst for deeper understanding.

But who are we kidding? Cruz/Fiorina beating out Donald Trump? Seriously? It would be foolish to predict. Who knows what Trump will do in response? But seriously, even with Trump's botched attack on her looks, how well did Fiorina do when she had her shot the first time around? We all know how quickly her boomlet died. And Trump has far more allies and resources to draw on now.

There is one last point that deserves to be mentioned. Last August, Digby noted:

A pro-Cruz super PAC controlled by millionaire Robert Mercer (who had written checks for 5 million to Cruz’s effort) sent $500,000 to Carly Fiorina’s super PAC. How often does it happen that a PAC for one candidate helps one of its rivals in a primary campaign? But New York Times reporter Amy Chozick cleared up the mystery when she tweeted:

“Fiorina finance chairs told me supporters of other candidates have thrown them $$$ to have a woman in race attacking HRC.”

As indicated, Cruz wasn't alone in playing footsie with Fiorina. But he was far and away the most notable—and she played footsie back with her quick endorsement of him when she dropped out. Simply put, this is the most crass, in-your-face quid pro quo politics. For Cruz trying to style himself as this year's “principled conservative,” it's a perfect giveaway. If you want to know why the whole “principled conservative” racket is in the toilet these days, the would-be Cruz/Fiorina ticket tells you everything you need to know.

But will anyone in the elite media even notice? Or care? Stranger things have happened, I suppose. But I wouldn't bet on it. At least not until Donald Trump starts pointing it out every single time that he takes to the stage.

So much for the smoothest move ever from Ted Cruz. So much for Carly Fiorina.