"Veep"’s exquisite edge: A profane catharsis for the nastiest presidential election in memory

The show's insults and cynicism offer an unlikely kind of release this election year, as Trump and the rest act out 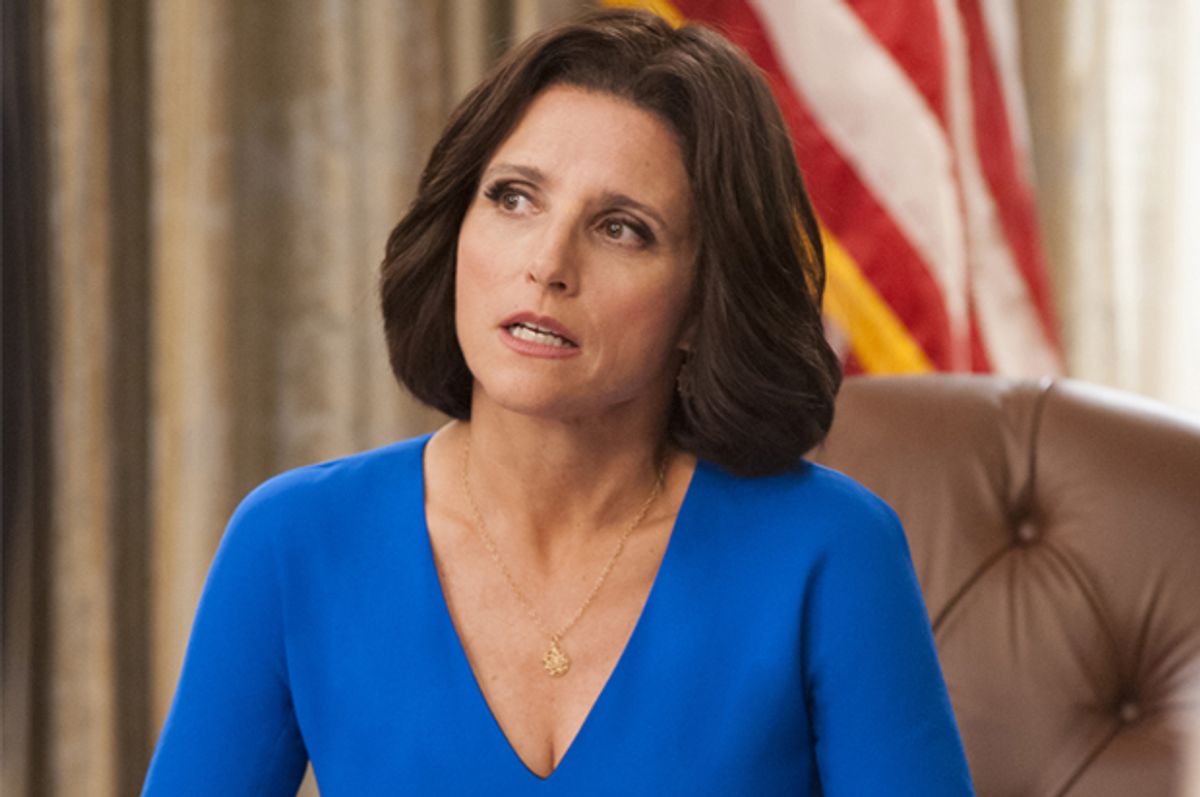 By chance, one of the funniest, harshest shows on TV – HBO's “Veep,” starring Julia Louis-Dreyfus – recently started its fifth season as one of the funniest, harshest presidential races in history heats up. There are enough parallels: Selina Meyer, the vice president who became president in the last season and is now running for her first full term, is foul-mouthed and ego-driven. Donald Trump is indisputably both of those things. And Ted Cruz recently named Carly Fiorina as his own ego-mad female vice president. (Of course, he has to be nominated and elected first, neither of which seems likely.)

Either way, there are a lot of opportunities to write stories drawing parallels between “Veep” and the real-world campaign. Here’s one of them, from The Guardian:

"The masses have called out for a president known for duplicity, covering up inappropriate and even racist comments, and an obsession with the media’s opinion about certain anatomical shortcomings. No, not Donald Trump, as he steadily marches toward the White House – Selina Meyer, the woman who’s already there."

"Both politicians have a way with gaffes… Trump and Meyer have even more in common. Both accused prominent politicians of not being eligible to be president. Trump said Ted Cruz, a former dual US-Canadian citizen, might not be able to run for the White House. Meyer questioned whether an Asian American governor was born in the US or China."

If you watch all five seasons of the show you’ll pick up several handfuls of parallels like these. But the essential truth of “Veep” is that we see things on the show that are far nastier and more profane and cynical that what we get to see in national politics. (Are things just as bad as the show under the surface? Probably.)

So as crude as Trump’s reference to his penis size (“I guarantee you there’s no problem”) might be, it’s nothing next to the characters in “Veep” likening each other to penises, testicles, and anuses. “It’s the way we talk in the White House,” the officious Amy (Anna Chlumsky) says when she’s called on a lesbian-mocking joke by another character. “I’m not even aware I’m doing it any more.”

I’ll keep most of this vague for now because a) I don’t want to destroy the humor that comes with comic surprise, and b) many of the show’s lines are too profane to reproduce here. But just as a sample: Jonah Ryan is known as “Jack and the Giant Jackoff,” “Scrotum Pole,” and a handful of other nicknames I don’t feel comfortable writing. A new campaign hand comes in for season five and almost immediately tosses out a flurry of cruel, insulting, and homophobic lines. When he bumps into an old associate he recalls a bunch of sexually humiliating nicknames. In one episode, characters joke around as the close relative of one of them breathes a final breath.

Compared to some of these characters, Trump campaign manager Corey Lewandowski is a humanitarian.

Some of the insults and metaphors are either in bad taste or pretty close. There’s a mocking line about wounded soldiers in a hospital, a joking reference to a child molester at a kid’s theme park, and a reference to Anne Frank that’s just over the top. This is in addition to the general narcissism of several of the show’s characters, the way they rank on either other, or the way Selina, for instance, neglects and belittles her daughter.

It’s worth mentioning, of course, that much of the show is also funny, smartly acted, and engaging. The first four episodes of the season are about a recount of the Nevada vote, which tied the electoral vote, and the tension gives them enough structure to hang everything else on.

But the brutal tone of the show is hard to get around. Why, with all the unpleasantness in the real world of the 2016 presidential campaign – Trump’s race-baiting, the insulting things Hillary Clinton and Bernie Sanders supporters say to each other, partisan media on both sides shouting accusations back and forth – why do audiences keep watching “Veep”?

Writing in The Atlantic, David Sims guesses that they won’t--that “like so much current satire, from "SNL" to "The Daily Show" to "Scandal"’s Donald Trump analogue—it’s struggling to match the unpredictable political pulse of the moment.”

But I’m going to speculate that audiences will continue to watch “Veep” in large numbers. Some of the reason is, of course, the show’s humor and intelligence. But some of it is that compared to “Veep,” the real presidential race is reasonably low-key, its characters well-behaved. We can laugh at the outrageousness of Selina Meyer and the rest, and then, when we walk away from it, it’s gone.

It’s the kind of thing that a lot of us wish we could do with the real political race. “Veep” acts as a kind of wish fulfillment for those of us who wish that contemporary electoral politics was just a rude joke, a piece of fiction, and not our reality. As long as it is, “Veep” is a weird kind of comfort food.