The real estate mogul will collect at least 45 of Indiana's 57 delegates, 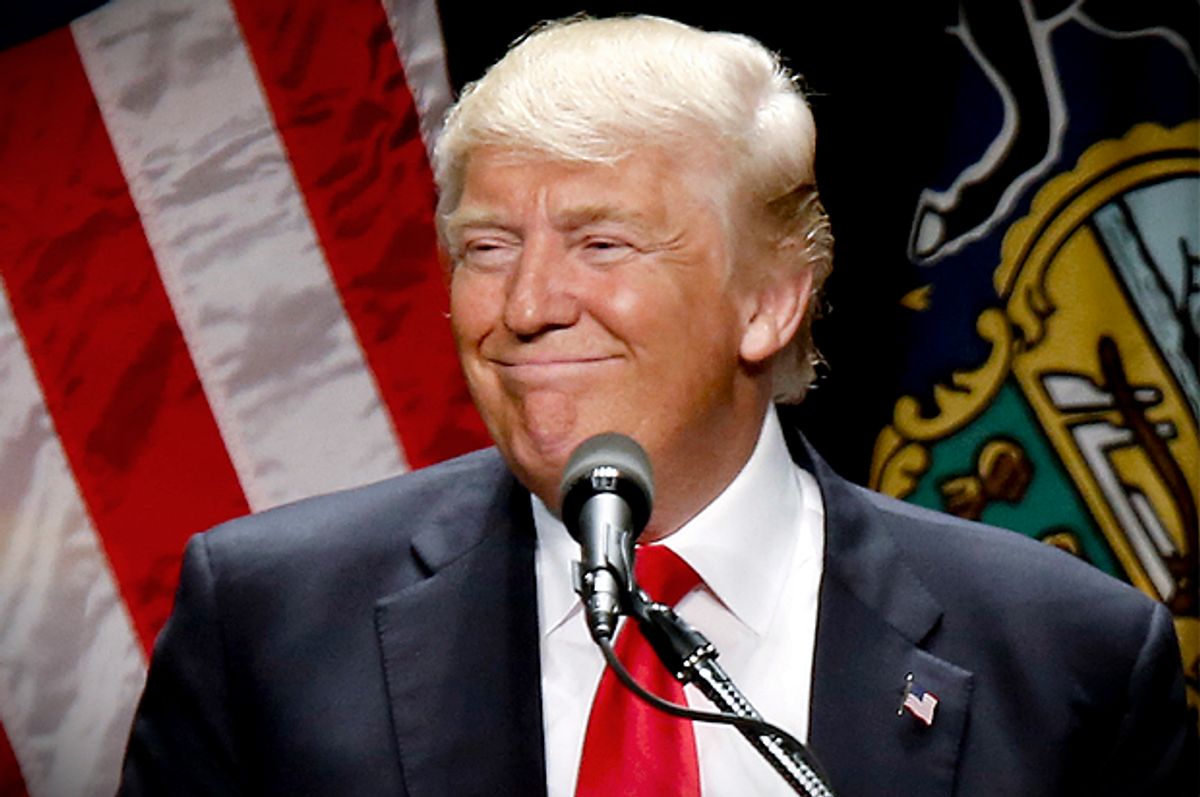 INDIANAPOLIS (AP) — Donald Trump took a major step toward sewing up the Republican presidential nomination Tuesday with a victory in Indiana's primary election, dashing the hopes of rival Ted Cruz and other GOP forces who fear the brash businessman will doom their party in the general election.

Hillary Clinton and Bernie Sanders were vying for victory in the Democratic primary, though it was too early to call the race as votes were being tallied. Clinton already is 91 percent of the way to her party's nomination.

While Trump can't mathematically clinch the GOP nomination with his victory in Indiana, his path now becomes easier and he has more room for error in the remaining primary contests. The real estate mogul will collect at least 45 of Indiana's 57 delegates, and now needs less than 200 more in upcoming contests.

"Thank you Indiana, we were just projected to be the winner," Trump wrote on Twitter. "We have won in every category. You are very special people - I will never forget!"

Cruz, who hasn't topped Trump in a month, campaigned vigorously in Indiana, securing the endorsement of the state's governor and announcing businesswoman Carly Fiorina as his running mate. But he appeared to lose momentum in the final days of campaigning and let his frustration with Trump boil over Tuesday, calling the billionaire "amoral" and a "braggadocious, arrogant buffoon."

Trump responded by saying Cruz "does not have the temperament to be president of the United States." Earlier Tuesday Trump had rehashed unsubstantiated claims that the Texan's father, Rafael Cruz, appeared in a 1963 photograph with John F. Kennedy's assassin, Lee Harvey Oswald - citing a report first published by the National Enquirer.

Cruz has vowed to stay in the race through the final primaries in June, clinging to the possibility that Trump will fall short of the 1,237 delegates he needs and the race will go to a contested convention. But he now could face pressure from donors and other Republicans to at least tone down in attacks on Trump in an attempt to unite the GOP heading into the general election.

Whether a united Republican Party is even possible with Trump at the helm remains highly uncertain. Even before the Indiana results were finalized, some conservative leaders were planning a Wednesday meeting to assess the viability of launching a third party candidacy to compete with Trump in the fall.

One outside group trying to stop Trump suggested it would shift its attention to helping Republicans in other races. Rory Cooper, a senior adviser to the Never Trump super PAC, said the group will help protect "Republican incumbents and down-ballot candidates, by distinguishing their values and principles from that of Trump, and protecting them from a wave election."

Only about half of Indiana's Republican primary voters said they were excited or even optimistic about any of their remaining candidates becoming president, according to exit polls. Still, most said they probably would support whoever won for the GOP.

Clinton, too, needs to win over Sanders' enthusiastic supporters. The Vermont senator has cultivated a deeply loyal following in particular among young people, a group Democrats count on in the general election.

Sanders has conceded his strategy hinges on persuading superdelegates to back him over the former secretary of state. Superdelegates are Democratic Party insiders who can support the candidate of their choice, regardless of how their states vote. And they favor Clinton by a nearly 18-1 margin.

Exit polls showed about 7 in 10 Indiana Democrats said they'd be excited or at least optimistic about either a Clinton or Sanders presidency. Most said they would support either in November.

The exit polls were conducted by Edison Research for The Associated Press and television networks.

A fall showdown between Clinton and Trump would pit one of Democrats' most experienced political figures against a first-time candidate who is deeply divisive within his own party. Cruz and other Republicans have argued that Trump would be roundly defeated in the general election, denying their party the White House for a third straight term.

Republican leaders spent months dismissing Trump as little more than an entertainer who would fade once voting started. Cruz was among those who actively tried to align themselves with Trump and called him "terrific."

As Trump began to pick up wins, Cruz became more critical of his rival's policies. Still, his torrent of attacks Tuesday was by far the most pointed and personal of the campaign to date.

Trump has now won seven straight primary contests and has 80 percent of the delegates needed to secure the GOP nomination. With his victory in Indiana, Trump now has at least 1,041 delegates. Cruz has 565 and Ohio Gov. John Kasich has 152.