Men are the problem here: Stop harassing women in public restrooms under the guise of "protecting" us

As bathroom panic explodes, random guys keep stepping in where they don't belong 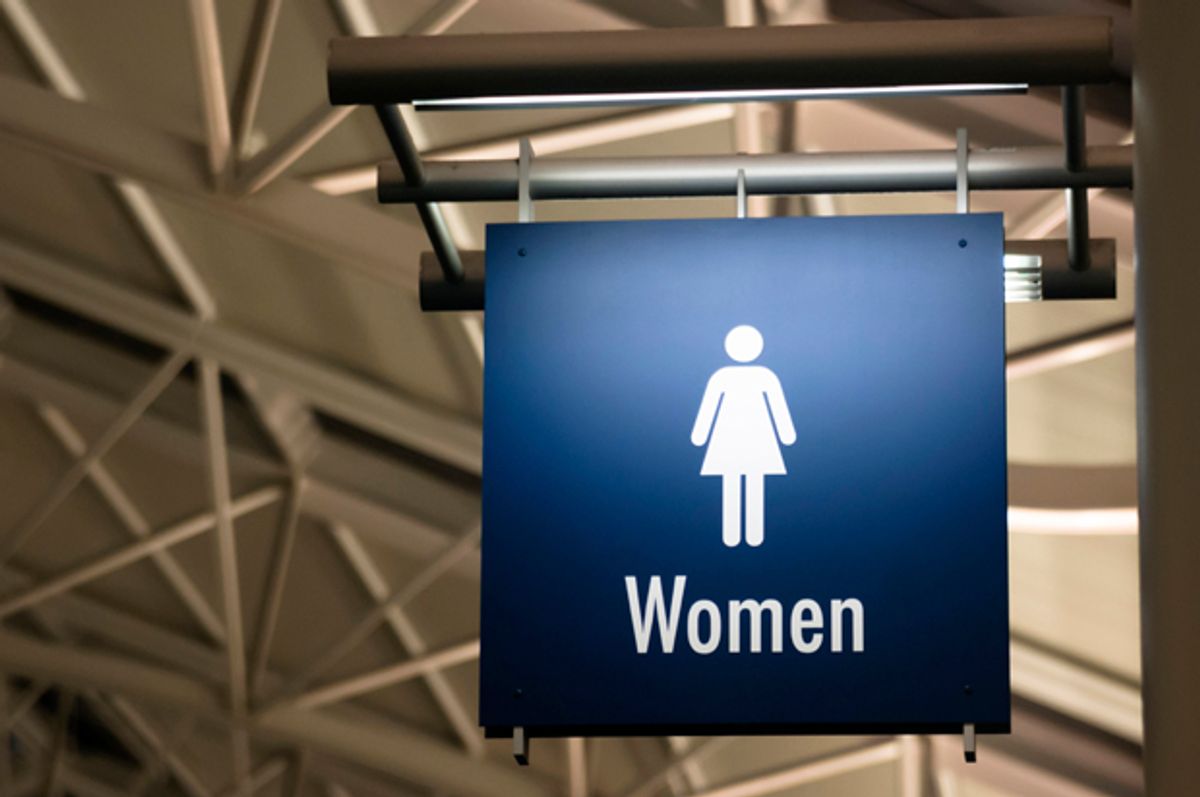 Local NBC News in North Texas reports this week that a gay woman says she was followed into a hospital bathroom — and then confronted — by a man who was skeptical of her gender. Jessica Rush says that she was being treated for an arm injury at Baylor Medical Center in Frisco on Thursday when she entered the restroom — and realized she had company. She told reporters, "It scared me at first. My first thought was, I'm about to be attacked because I am a 5' 3" female." She then recorded the conversation that ensued — the man explaining that "You didn't look like a girl. When I saw you enter I thought it was…" "A boy?" she replied, and he said, "Yes, I was kind of confused when I saw this. That’s the only reason. Now that I see you are a woman.… You know it’s difficult. Of course, you dress like a man. Of course, you dress like a man." He later reportedly claimed that he was concerned because his mother was going into the bathroom as well.

Rush, who says she was wearing athletic clothing and a baseball hat at the time, graciously told NBC that "I understand one thing if you're a cop of the Dallas Police Department. But some random guy coming in I think is absolutely absurd and inappropriate." Funny, because I think it'd be inappropriate for a cop to follow her into a bathroom too. Where are the cops going after the men who wander into ladies' rooms on these weird fact-finding missions?

Last year, Detroit woman Cortney Bogorad filed suit against the restaurant chain Fishbone's after a security guard entered the restroom she was using, saying, "This is a woman's bathroom, if you are a man, come out!" She claims he then grabbed her pushed her out, telling her, "Boys aren't allowed in this restroom." Bogorad happens to have short hair.

As bathroom panic reaches ever more fevered pitch, it's getting easier to find helpful men eagerly claiming they want to protect their mamas and baby girls. Sandy Rios, the director of government affairs for the American Family Association, boasted to Breitbart this week that the organization plans to send men into Target ladies' rooms to test the retailer's transgender-friendly bathroom and dressing room policy, thereby deflecting the "trauma, certainly for little girls, of having men dressed like women coming in their bathrooms." Right, because as Wisconsin House Rep. Jesse Kremer explains, the very thought of trans men and women being allowed to use to public facilities appropriate to their gender identity is what constitutes the "real war on women." And who doesn't love it when men tell us what our real problems are?

Because this needs to be constantly restated, trans men and women are not people who dress up in opposite-sex clothing so they can prowl around in Target toilets. They're not wearing disguises. It doesn't work that way. People just want to be able to pee like humans. And here's a thought, maybe if a woman does face harassment or worse, in a restroom or a changing room — by most likely a dude like yourself — she doesn't need your intervention anyway? In Florida recently, a woman chased a man out of a Target after he made creepy comments to her while she shopped in swimsuit section. He was eventually apprehended, and what do you know? He had a prior record of "taking photographs of women in dressing rooms."

The Dallas Morning News notes that this week the suburb of Rockwall's City Council is mulling a controversial bathroom bill, and that Governor Dan Patrick says, "This issue is plain and simple: We should not allow men into women’s restrooms." Hear that, guys? And I agree. It's not trans women who are the problem. It's you.