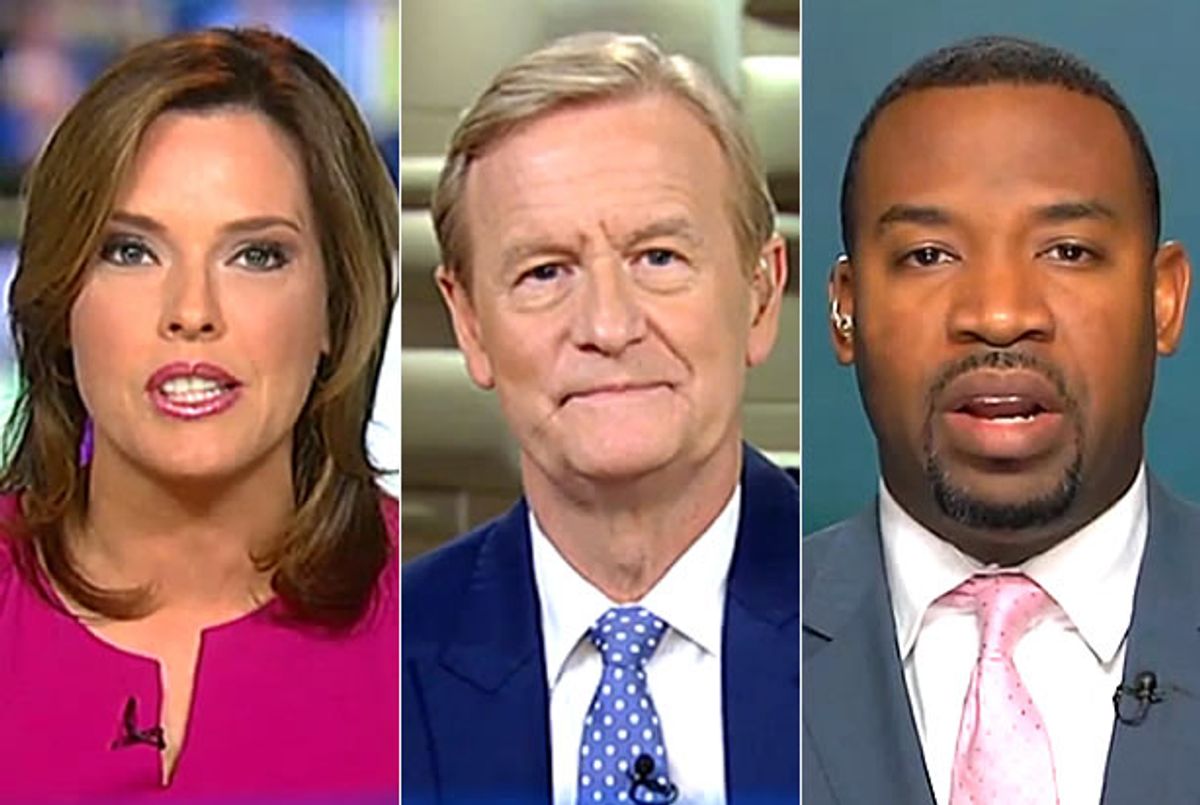 On Fox & Friends Wednesday morning, co-host Steve Doocy welcomed on conservative commentator Mercedes Schlapp and civil rights attorney Andell Brown to discuss what he characterized as a "plague of leftist violence at Trump rallies." Brown, however, quickly made Doocy and his producers regret extending him the invitation.

"Andell, let's start with you," Doocy began. "Are you OK with this leftist violence?"

"Calling it 'leftist violence' is just the right-wing putting labels on something and making people believe that's all that it's about," Brown replied.

"But they are leftists, and they're violent," a smirking Doocy shot back.

Brown was having none of it, however. "These aren't 'leftists,' they're protesters who have a problem with Donald Trump, and there has been violence on both sides, so don't try to blame it on one," Brown replied. "The facts are, Donald Trump has done a great job of playing the game, and he's become kinder and gentler of late. But in the beginning, he didn't repudiate and reject the violence from his supporters -- he offered to pay their legal fees."

Doocy had no facts on his side, so he decided to invent some statistics. "Ninety-nine percent of the violence is from the anti-Trump people," he said, "not from the Trump supporters. They were just there for the show!"

"I don't know where you got that stat," Brown replied, "but I think you need to check your stats." Brown said this while in split-screen with Doocy, who tried to laugh away the fact that he'd just been righteously nailed for lying on television. "What I've seen is a man being punched in the face by a Trump supporter, and [Trump] offering to pay his legal fees."

"You're right," Doocy said, "in that one case." He then turned Schlapp and asked, "Am I off-base on this stuff?"

She repeated the Fox News party-line, assured him that the left really is responsible, and all would have been well for Doocy, had he not allowed Brown to have the last word.

"The issue is that the violence has followed Trump wherever he goes," Brown said. "None of the other candidates, on the right or the left, have had the same number of violent incidents at their events. Trump's the common denominator -- the environment he created. It comes from the top, from leadership, and when leadership does not discourage violent reactions to people who have different opinions, this is what you get."

Schlapp tried to take the high ground, shouting "Violence is unacceptable!" but Brown beat her back. "I wish Trump would say that," he said, as Doocy ended the segment.