Let this sink in: The Republican Party has chosen a birther as its presidential candidate

Remember this, no matter what Trump now says, his entire political existence is built on bigotry 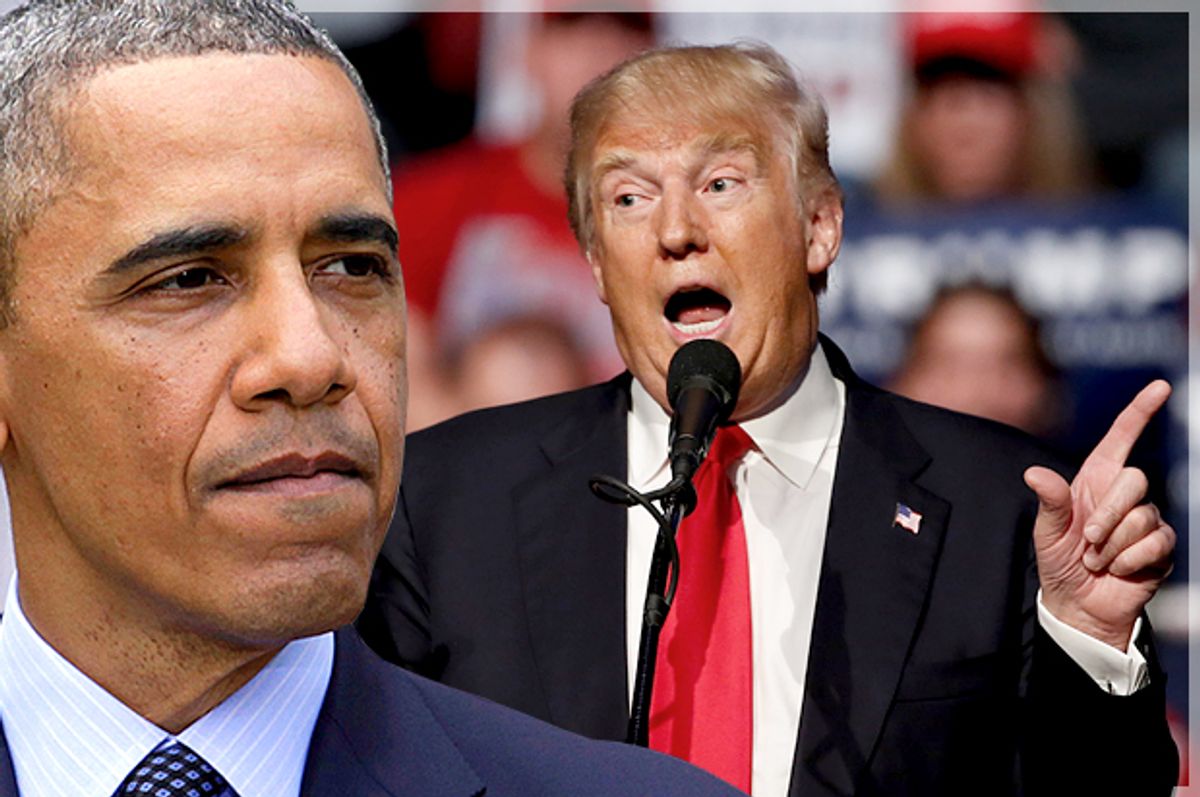 This is happening, people. This is really happening. Donald Trump will be the Republican nominee for president of these United States. Let that sink in.

The hot takes will abound in the days and weeks ahead. Pundits will conduct the autopsy on Ted Cruz's campaign. We'll ask why John Kasich is still running. We'll question if there's still any hope of a contested convention. We'll express wonderment at how quickly and awkwardly the Republican establishment surrenders to Trump.

Pay particular attention to this storyline: Now that Trump has won, he'll continue to shift the tone and approach of his campaign. It was announced a few weeks ago, for instance, that Trump was “shaking up” his campaign. He hired some veteran operatives and was preparing to “professionalize” his operation.

The plan, we now know, was to quietly change the way Trump comports himself in public. What we got, as The Washington Post's Chris Cillizza put it, was Trump 2.0. Trump 2.0 is kinder, more disciplined, less bigoted. He's a candidate who, as Cillizza writes, “will show unbound delegates as well as party leaders and influencers that he can be magnanimous, that he can be a uniting force within the party.”

Although Trump has wavered in his execution, the pivot has been obvious. And now that he's running virtually uncontested, you can expect more of this. During his speech last night, for example, there was no talk of Muslims and luxurious walls on the Southern border; instead, he focused on trade and a kind of half-baked economic nationalism. The rhetoric, though, was far less divisive. This is Trump transitioning to general election mode.

But here's what everyone should never forget: No matter what Trump now says, he owes his entire political existence to bigotry. The inimitable James Carville recently wrote a piece making what will, increasingly, be a critical point:

“I'm a Catholic. I've seen enough baptismal water spilled to fill William Taft's bathtub ten times over. But it doesn't take a Catholic like me to understand the original sin of the Trump candidacy. His first act on the political stage was to declare himself the head of the birther movement. For Trump, the year 2011 began with the BIG NEWS that he had rejected Lindsey Lohan for Celebrity Apprentice, but by April, his one-man show to paint Barack Obama as a secret Kenyan had become the talk of the country. Five years later, Trump is nearing the Republican nomination.”

Birtherism is how Trump lunged into presidential politics. It was his first – and loudest – dog whistle. And the thing about birtherism, in addition to being patently untrue, is that there's no reason to believe it apart from bigotry. To support the theory is to announce, in the clearest possible terms, one's own prejudices.

“Look, I understand that there's plenty of craziness to investigate in our politics. Cruz believes that global warming is a hoax. Ben Carson claimed that the Biblical Joseph built the Great Pyramid of Khufu. Heck, once upon a time, George W. Bush famously thought the jury was out on evolution. But Trump's birtherism is far, far more important – for two reasons. First, in my experience, when a politician says he doesn't talk about an issue, that's precisely what you should ask him about. Second, there's another difference between being a birther and a flat-earther. It's possible to believe the Earth is flat and not be a bigot, but it's impossible to be a birther and not be one.”

Trump doesn't want to talk about birtherism anymore – for obvious reasons. It's bad public relations. The few times reporters have brought it up, Trump dodges or bullies his way out of it. “I don't want to talk about that anymore,” he told Chris Matthews. But make no mistake: Trump knew exactly what he was doing when he embraced the birther movement. “I don't think I went overboard,” Trump said in 2013. “Actually, I think it made me very popular....I do think I know what I'm doing.”

Trump's success springs from this "original sin," as Carville put it. Many of his supporters received the signal he sent in 2011 and have internalized it; they know – or think they know – that Trump is one of them. Not all Trump supporters are racists, of course, but a terrifying percentage are. And that's no accident.

That Trump has catapulted to the top of the Republican Party, that he's now the presumptive nominee, says a lot about the GOP and our country. He'll very likely lose in an electoral landslide to Hillary Clinton, but that's beside the point. His campaign has already done incalculable damage. He's tapped into an undercurrent of bigotry and exploited it for political gain. The results of that will, unfortunately, survive his self-serving campaign. And no one, especially in the media, should let Trump forget that.